As a therapist, I have never before taken a public stance on who people should vote for within the political spectrum. This year that has drastically changed — and I am not alone: America’s Therapists Are Worried About Trump’s Effect on Your Mental Health. I was taking a stance against Trump long before the Washington Post leak due to many disgraceful things he has said from the very beginning of the campaign — things that should have us alarmed as a country. This “last straw” of sexual assault talk, has had a chilling effect on many victims. Many who would never want to talk about it publicly. Some of the symptoms of clinical PTSD include having flashbacks, nightmares, having distress due to being reminded of an event, and unwanted memories. Several women have reached out to me in the last few weeks telling me of these types of experiences since the leak. And I will not stand by and have these women gaslighted or minimized because some might want to downplay the very real remnants of rape culture we see in our day-to-day lives. People don’t seem to like it when I use the term rape culture. Well — I don’t like that I have to use it either. But it is what it is. And those who would defend any aspect of this type of rhetoric is participating in it whether they want to admit it to themselves or not.

I am offering the following description as part of consumer consent: I describe a sexual assault that happened to me (if reading this type of account is difficult or triggers symptoms — no need to read further) and I include curse words/adult language.

I’ll never forget the day (17 years old) I had fallen asleep on a public bus and as I woke up I realized the man next to me had his hand on my inner thigh moving up towards my genitalia.

I pretended I was still asleep.

I made my plan of escape. I would wait until the next stop and get off at the last minute so he wouldn’t be able to follow me. And I did just that.

I remember being on a busy sidewalk, breathing hard, my heart rate out of control wondering what had just happened.

And then the self-doubt and self-blame coming crashing in. Did that just really happen? Was I imagining things? Why hadn’t I called him out in front of the entire bus and humiliated him? Why had I let him continue until I could escape?

This bothered me for so long. That I did not know how to stand up for myself.

And now I only have grace for that young version of me.

So I’m standing up on the bus, now, and yelling at the top of my lungs:  And I’m directing it to TRUMP –

Bus driver – do you see what this man was just doing to me?? Call the police because I want him arrested!! I’m telling you all that are sitting around me – he had his hands on my crotch while I was fucking sleeping. Who saw it? Who didn’t help me? Who stood by without saying anything?

*I’m a big believer in using as many swear words as one needs in the process of sexual healing. That’s when foul language is perfectly wonderful and part of righteous anger.
Traumatic when coming from the mouth of a perpetrator. 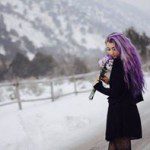 October 31, 2016 Excommunication: Cruel and Unusual Punishment
Recent Comments
0 | Leave a Comment
"Mormonism claims to be the most American of all religions. When it comes to racism ..."
Morm on Do Better
"I was once given a great gift--by the Navy (indirectly, in this case). I was ..."
CalSailor Racism is bigger than hate
"Fine report, Natasha on a wonderful set of meetings. I hope that more meetings can ..."
Mark Matheson Thru Cloud and Sunshine
"So, let me get this straight, you feel that “ecclesiastical leaders should be leading the ..."
GDS Working Towards a Non-Splintered Community
Browse Our Archives
Related posts from The Mormon Therapist