May we, the white members of the church that directly carries Christ’s name, actively take a role in healing the wounds of people of color both within and out of our communities.

This guest  post is being shared with the author’s permission.   It has been written by Sam Newton. Opinions shared on this post may or may not completely reflect the positions of The Mormon Therapist Blog and Natasha Helfer Parker.

Then I became a public defender. I defended minorities accused of crimes. Suddenly, I became associated with those the American establishment hates. I will say that many of my clients were guilty and deserved to be there and many of the criminal justice system’s actors were well-meaning. But many were not.

I saw firsthand racist cops, prosecutors, and judges. I saw people who didn’t give a damn about locking an innocent person away. I could not convince them to listen and watched their callousness as yet another minority went to prison or faced the death penalty. I sat in mothers’ homes as they wept about the injustice as their innocent children sat in prison. I saw people in power who turn their eyes away from terrible injustices reaped against entire communities as nearly every black man in sight found himself a target of the criminal justice system. I saw the police openly stop people because of their skin color or beat them. I heard judges make racist comments about my clients. I’ve heard jurors spew racist rhetoric and convict my clients. I tried to convince judges of these realities and they would consistently twist the facts to find non-racist motives for this stuff. This system is reality for minority America, a system that ignores them, perpetrates violence and injustice against them, and they watch so many stay astoundingly silent or deny that it even exists.

There is a profound ignorance, a willful blind eye, and in some cases complicity with a long history of slavery and oppression. Think about it: people had to fight to be free. It took violence to get the right to own property, to marry who you love, to vote, to work in a job you wanted, to not be separated from your family, to not be raped or beaten or killed, to not be bought and sold as a piece of property. White people did not give that up, even after a massive Civil War. Think of Birmingham, of Selma, of the Montgomery Bus Boycotts. People wanted to VOTE. They wanted to ride the bus together. They wanted to use the same water fountain or sit at the same lunch counter. They wanted to go to the same school. And they were beaten, attacked, and killed for just asking for it. It took the United States Army to escort a few black children to Little Rock High School amid jeering crowds of angry white people. Think of 16th street Baptist church. Four little girls were killed doing nothing other than spending time at church. Medgar Evers was shot in his own home. He was organizing people to vote. Think of the thousands of people lynched: their bodies hanging from trees as all-white juries acquitted those who brutally murdered them. How can we forget little Emmett Till who was tortured, killed, and disfigured because (even if it’s true, which is doubtful) he spoke down to a white woman? His murderers openly bragged after their acquittal. White people like to forget all of this. Our collective amnesia is so strong. But minorities don’t.

In 2014, I went to a conference put on by the NAACP. It was after the murder of Michael Brown in Ferguson, Missouri. I was surrounded by some of the best attorneys in the nation and we gathered together to express our collective outrage. The moderator went around the room and asked each of us what we could do to help stop this in America. It got to me and I said, “I need to help white people feel shame.” A black woman yelled out, “It will have more power coming from you as a white man than it will ever have coming from us.”

I recall some protestors white people love. They were people who poured tea into a Boston harbor. They attacked British soldiers on the Boston Common. They were people who were not afraid of violence. They took their weapons and fought a war against what they felt was a tyrannical British monarchy. They did untold damage to property and killed many. How are these protestors different? They too are not represented. They too feel powerless. And like revolutionaries of all generations, the violence is a desperate attempt to be heard, to be valued, to be respected and treated the same as everyone else.

I do not condone violence. But violence is a sign of how deep and powerless people feel. And sometimes, it’s the only way, unfortunately, we have been able to stop some oppression. I wish people could learn to listen, to seek to understand, to change, to reach out with love to their brother and sister. It takes both sides working together. I hope we can all commit to doing our part to apologize for the past and collectively work to make an America that truly meets the Declaration of Independence’s ideals: where all are “created equal, and that they are endowed by their Creator with certain unalienable Rights, that among these are Life, Liberty, and the Pursuit of Happiness.” That will take all of us. 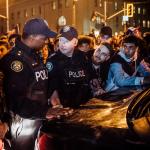 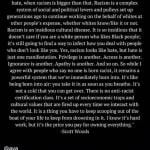 June 4, 2020 Racism is bigger than hate
Recent Comments
0 | Leave a Comment
"Mormonism claims to be the most American of all religions. When it comes to racism ..."
Morm on Do Better
"I was once given a great gift--by the Navy (indirectly, in this case). I was ..."
CalSailor Racism is bigger than hate
"Fine report, Natasha on a wonderful set of meetings. I hope that more meetings can ..."
Mark Matheson Thru Cloud and Sunshine
"So, let me get this straight, you feel that “ecclesiastical leaders should be leading the ..."
GDS Working Towards a Non-Splintered Community
Browse Our Archives
Related posts from The Mormon Therapist