Muslim Women Ask if Religion Bars Them from Leadership Roles

Upwards of 200 (mostly Muslim) women from about 50 countries have gathered this weekend in historic Istanbul, Turkey to look at how women are and can be leaders across all facets of life – spiritual, political, social, economic, and family – and whether religious barriers hinder women from working in positions of leadership. This is the third global WISE (Women’s Islamic Initiative in Spirituality and Equality) conference, an initiative of the American Society for Muslim Advancement (ASMA) and the brainchild of ASMA founder and director Daisy Khan.

“Change doesn’t happen by itself. You need change agents.”

WISE and Daisy Khan have come far from that first global conference in New York in 2006. Five years ago, the main objective of that conference was trying to figure out the most important global concerns for Muslim women around the world, and what could be done about them. One of the biggest and well supported ideas that came out of the 2006 conference was the need for a women’s Shura Council, where women would “actively dialogue and debate” important issues, then research and discuss them, and then ultimately write position papers that could be used by Muslim women over the world in their work, as explained at the Istanbul conference by Azizah magazine editor Tayyibah Taylor, a WISE Shura Council member.

And so, that vision has come to be. In the past five years, the Shura Council, made up of numerous Muslim women from around the world, have released three heavily researched and referenced position papers on “Jihad Against Violence,” “Female Genital Cutting,” and “Adoption and Care of Orphans Children.” The council is working on two more position papers – women in leadership, and on the proposed Mufftiyah training program.

Having been part of WISE for five years now, I was impressed and surprised to learn the Shura Council had been so active and produced three papers in the past five years, and that the council was working on two more. Surprised, I think, because there hadn’t been a large media push to present the papers to the public.

Shura Council member Farheen Kapra said the position papers, all available on the WISE website, are meant to be used by women in their work around the world. But in my journalistically-driven opinion, I think the council’s hard work could some public relations and social networking help. Such important position papers must get into the hands of women who need it to support their work around the world.

For example, a few years ago Laleh Bakhtiar produced an English translation of the Qur’an, called the Sublime Qur’an, and reinterpreted controversial verse 4:32. In many past interpretations, the verse read, “Husbands who fear adversity on the part of wives, admonish them, leave their bed, and beat them.” Bakhtiar, after consulting numerous Muslims scholars and undertaking her own in-depth study, concluded that the Arab root “drb” (which in the past was translated to “beat”) also means to “go away.”

Thus, she reinterpreted the verse to mean “Husbands, who fear adversity on the part of wives, admonish them, leave their bed, and go away.” The Shura Council drew upon this text in their position paper on “Jihad Against Violence,” which covers extremism as well as domestic violence.

That translation, according to the Shura Council is now used by 20 professors in classrooms around the world and has been cited in one child custody case. Also, the WISE Shura Councils FGM paper has led to a fatwa against the practice of FGM, reported Ms. Taylor as another example of how the council’s work is helping to make effective change for women.

A participant asked if the council’s papers are presented to Islamic scholars at Al Azhar University in Cairo or to scholarly institutes or ulema (Islamic legal scholars) in Saudi Arabia for their approval and to provide more weight to the papers. “We do send our papers to the OIC (Organization of Islamic Congress). They are reading our statements and have distributed our papers,” said Ms. Khan. “We’re not necessarily seeking the approvals of scholars [in Al Azhar or in Saudi Arabia] – but we’re open for suggestions.”

At the heart of this conference is this question – does Islam, does religion, bar women from leadership roles? What ayahs of the Qur’an, hadiths, or Islamic examples support or just allow for Muslim women to seek leadership roles in various facets of life? Does Islam give credence to the barriers put forth by various countries, constitutions, religious leaderships, and patriarchal societies?

The women here say no. And their stories supporting their views are amazing.

This conference is filled with Muslim women leaders who are pushing for change and advocating for Muslim women to have their full Islamic rights. In Palestine, Judge Kholoud Al Faqeeh is the first shariah court judge appointed in the region after passing a legal competition in which 45 men and two women applied for judgeship. She spoke how when some men would walk into her courtroom, they would say, “Oh my God, it has come down to this. We have a female judge.”

From Kenya, Sophia Abdi Noor, the first Muslim woman nominated member of Parliament, spoke about how she underwent female genital mutilation “at a very tender age,” lost two dear friends to FGM, and was forced into an early marriage. “I have two daughters, and my daughters and other daughters of the [Kenyan] Muslim community must not suffer like I have suffered. … I had a responsibility to say ‘No!” to issues that are not Islam[ic].”

Ms. Noor was stripped of her seat when the Islamic leadership in her region declared that Muslim women could not be in Parliament. Since then, she fought back and has worked to change the Kenyan constitution to reinstate inheritance rights for women, and after telling of her personal experience with FGM, the Parliament voted to make the practice of FGM a criminal offense. Now, four women are members of the Kenyan Parliament.

These women, as well as many others here at the conference, insist that the problem is not the Islamic faith – the problem is cherry-picking through interpretations of sacred text, interpretations pushed forth by men and women for generations that put up a barrier against Muslim women seeking leadership roles.

Further sessions in the next two days will be exploring this topic even further, and the WISE Shura Council is presenting its findings on the issue of women in leadership roles in relation to Qur’an and hadith. Check back to the blog in the next few days to learn more and read more.

October 6, 2011
Thanks Steve Jobs from an Autism Mom
Next Post 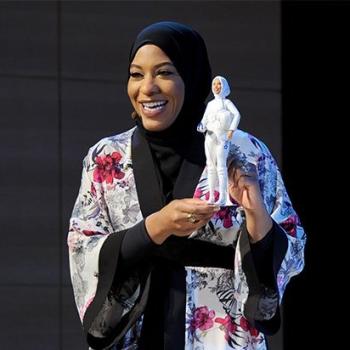