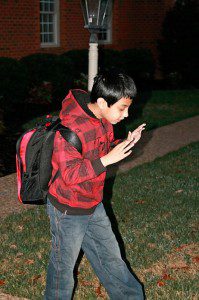 Every morning the routine is the same – I get up about 30 minutes before the kids and get things ready. Lunches are put into backpacks, notes are written, breakfast is put on the counter (if I’m lucky), the cat is fed and Lil D’s iPad is taken off the charger, zipped into its case and put in his backpack.

Oh that iPad. That electronic device that has grown its own personality in this house – Lil D’s sidekick; his “little buddy” (unlike Gilligan was to the Skipper, but I’m dating myself now); his constant companion.

Last month when we went through what I now feel was this surreal experience when Lil D’s iPad was lost/taken (and subsequently lost his voice), to how I fought (with the overwhelming support of people I knew and didn’t know around the country) to get his iPad back and to when we miraculously recovered it – the comments and questions are still coming.

In and around the community I live in, as I run into friends and acquaintances, they say much of the same things:

Hey! I saw you on TV talking about some iPad!

I heard you got Lil D’s iPad back! Were you able to reprogram it? Is he doing well with it now?

Wow, remind me not to mess with you or you’ll go on TV and hunt me down!

I’m not some vigilante, folks (I write with a smile), but I am a mother who is daily trying to strike a balance between protecting and fighting for her children while teaching them to deal with the knocks that come to them in this world. But, I am the first to admit that when it comes to Lil D, it’s no holds barred. With the severity of his autism, with his inability to express his thoughts and emotions, with the vulnerable life he lives, I will always fight for him. If he is wronged, I will do whatever I can to right that wrong.

So, I don’t mind the jokes. And I appreciate the support shown to Lil D, our family and myself. Truly, if you hadn’t spurred me on and offered your suggestions, help and support, I may have given up too soon. And, with such interest shown in how Lil D uses his iPad and how he has fared since it was returned, I thought I’d share some updates.

The iPad indeed was wiped clean, restored to factory settings, when we got it back. That was a blow, but it didn’t detrimentally hurt Lil D. We restored most of his favorite apps. And, because he had been working on it for 1.5 years across all environments (school, home, community-based instructional CBI outings), his therapists, teachers and myself were pretty familiar with the boards we had programmed into his Sounding Board app. We had discussed a few times before the iPad was lost/stolen that we wanted to overhaul some of the boards and clean them up.

So this became the opportunity to do that. We quickly built in the boards we knew were most important and frequently used by him – the ones with his favorite food choices, the ones that show his reinforcers and preferred activities. His school quickly built back the boards he uses to do his programs, request items and express other basic requests and emotions.

Then, we started tailoring the Sounding board app to things Lil D is doing now. He is working on a variety of “life skills” at home, where we are teaching him chores and self-care management. Those pictures and verbal cues were programmed into the iPad. We added new places to visit for his CBIs — pictures of him in the pool, walking the track at our gym and going up and down the escalator at an outdoor mall close by.

It’s this last thing that brought forth our latest breakthrough with Lil D and his ability to communicate through the iPad.

One of our home therapists told me the most extraordinary story this week. After doing some shopping, Lil D had requested the escalators as his reward/break. They went to the mall and proceeded to ride the escalators, but as the therapist started to walk towards it, Lil D b­­egan hyperventilating and starting a meltdown. 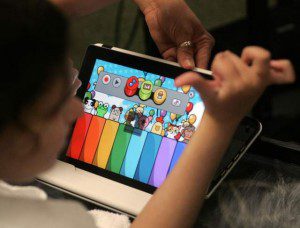 The therapist showed him the iPad, and once again he pushed the button for escalator. Again, she started to take him up it, but he became upset. OK Lil D, she said. Show me what you want.

He took her to the elevator close by and then pointed to the iPad.

He wanted her to take a picture of the elevator and put it on the iPad, so it could be one of his choices.

Take a moment now to understand the monumental-ness of this moment. Stop with me for a minute, as the world slows down to a garble around you and through the muffled background noises, the only thing you hear is this – Lil D asked for something to be put on his iPad. He took the initiative to ask for a new item to be added to his communication device instead of relying on us to figure it out.

That’s not just spontaneous language or spontaneous use of the iPad’s communication function, that’s Lil D’s recognition that he can use the iPad to ask for new things, things that he’ll want again in the future.

That, ladies and gentlemen, is the ever-so-painstakingly-slow growth of his voice. And I’ll be damned if anyone ever tries to take that away from him again. 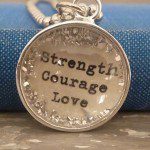