On Thursday,  I was blessed to be in a room of amazingly powerful, incredibly strong, brilliant women who were owning their power and sharing their strength. This is the first year I was involved in International Women’s Day, and was in the audience of a panel discussion that featured women from  Africa, Jordan, India and Lebanon. It was hosted by an organization that was founded by a Malaysian woman, and employs women who are from very diverse backgrounds and all socioeconomic status’.

March 8th is the day that we celebrate being women who are empowered to Press for Progress, by speaking out and standing up.

I do what I can in my every day life to speak out, show up and amplify the signal for progress.

Stereotypes are being smashed this season on Grey’s Anatomy, and I am here to witness history being made by Shonda Rhimes and the writers on my favorite TV show.

Intern Qadri returns in Episode 12 on Dr. Jackson Avery’s service. If you are not a fan of the show, Dr. Avery is played by actor, Jesse Williams. Dr. Avery is the resident Plastic Surgeon on staff and Dr. Qadri is on his staff, working on regenerating skin, and is flustered by him. He’s beautiful and brilliant and incredibly crush worthy and Dr. Qadri is not immune whatsoever.

In this scene, she slips and tells Dr. Avery that he’s pretty. 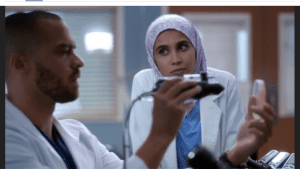 He’s PRETTY. She opens her mouth and gushes adorably. I remember Grace* doing that before, I remember Rachel** doing it too. I believe even Olivia Pope*** has done it. But a hijabi Muslim woman? HELL NO. Okay, well I’ve seen it in person, because, you know, I have friends. But on TV? hahahhahahha

And then here, where she is CRUSHING all over him, trying to impress Doctor. Jackson. Avery by writing 2 medical research papers in 3 days. 2. Without sleeping. *giggle*

Then, in the next episode (S. 14 E. 13) Dr. Qadri takes center stage in the opening sequence and Muslim fans took notice. This post, by Sarah El Dishnawy was shared by several Muslims in my FB timeline. 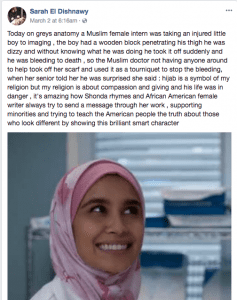 My feelings about the episode were mixed. Yes, it was pushing the boundaries. Yes, it was busting stereotypes. Yes, it was amplifying the positive message of compassion in Islam, but the scene seemed contrived and premeditated.

In all of the other times we’ve seen Dr. Qadri, she’s been wearing a simple, poly blend 2 piece hijab. If you’ve never seen one in person, this is what they look like when they are on the shelf.

Two piece hijabs are the entry level, beginner style that are most used by children and newly minted hijabis. They are also pretty useful for wearing around the house (as are their one piece sisters.) But in this episode, Dr. Qadri is wearing a wrap style scarf. That, in itself is no big deal, but the way she is wearing it is a loose, temporary way that looks like she doesn’t want to mess up her hair.

If you’ve ever been to a woman’s party you know what I mean. If you haven’t had the pleasure, let me explain further. The hijabi women get their party clothes on and do their hair up really nice and fancy and lightly drape the wrap around their hair so its technically covered, but not tightly wrapped to squash their ‘do. 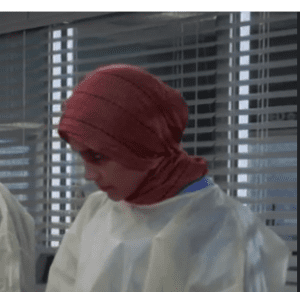 See what I mean here?

Oh, and here, it isn’t even tucked or tied. If she was actually working, this wrap would have come loose almost immediately. (I know this because Kate & Pea have tried so many different ways of wrapping and it is difficult to get one to wrap securely without using pins.)

Then, when she is attending the emergency patient, she whips off her hijab and uses it as a tourniquet.

Later, when she is talking with Dr. Hunt while they are scrubbing for surgery and she has a hood on, he says he’s surprised she just took it off like that, she says,

“Well, it is a symbol of my faith, but my faith is about Service and Compassion and he was bleeding really fast.”

I finished watching the episode, but with mixed feelings. I really wanted to talk to one of my Muslim, hijabi friends, but I don’t know that they watch Grey’s, so I shared my thoughts with that post by Sarah El Dishnawy, hoping one of them would chime in.

At the end of the episode, we see Dr. Qadri sitting at a desk doing some computer work, wearing a surgical hood. Dr. Hunt returns the cleaned scarf back to her, and she whips off the hood and drapes the scarf over her hair. The scene is touching, especially between Hunt, a veteran from the Iraq war – who presumedly has a history dealing with Muslims overseas, and his intern. 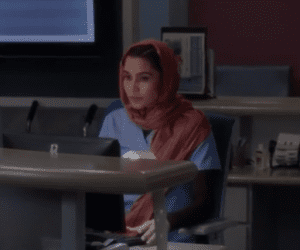 But my problem is twofold. One, a lack of consistency in this character and her level of hijab, and two, a hijabi woman would most likely have a backup scarf in her locker. Most people I know in medicine keep a set of essentials in their locker so that if they get soaked with various fluids and have to shower and change, they have a clean set. (You know, essentials. Bra, panties, socks, underwear.)

I follow the actress, Sophia Ali, on Instagram, so I know she doesn’t cover in real life, just like the actress, Yasmine Al Massri, who played the Amin sisters on Quantico. I don’t know how the writers on Grey’s are getting their info on Muslim women who wear hijab, but I really think they would do a much better job with an actual Muslim consultant on staff. 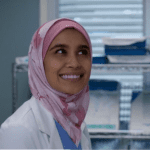 January 16, 2018
A Muslim Character on TV, and Being Muslim is Not the Focus!
Next Post 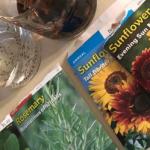 May 15, 2018 Am I an Ally?
Recent Comments
0 | Leave a Comment
"Real friends are gems to find. It's sad to think how long you can be ..."
Aloha 😛 Stepping Up When Big Deal Things ..."
"It's been a great article. Thanks. A life suitable for Islam can be experienced all ..."
Karlı Selim Dahlia Qadri, Intern, Hijab and International ..."
"I congratulate you. It's nice to be a muslim character. I will follow you very ..."
Karlı Selim Not a Hot Take…But the “B ..."
"I have no knowledge of the Bahai faith."
Kristina ElSayed My Journey with The Story of ..."
Browse Our Archives
Related posts from My Islamic Life