The Politicization of Evangelical Quiverfull

Keep in mind that U.S. Embassies traditionally only fly the United States flag, not a hop scotch hodge-podge of weird flags like the Christian flag (yes, there is one) or anything else without very special permission on their main flagpole. But some embassies are flying the flag in honor of June being LGBTQ Pride month against the State Dept. advisory.

Plus Trump himself said this:

@realDonaldTrump
· May 31, 2019
As we celebrate LGBT Pride Month and recognize the outstanding contributions LGBT people have made to our great Nation, let us also stand in solidarity with the many LGBT people who live in dozens of countries worldwide that punish, imprison, or even execute individuals…

@realDonaldTrump
….on the basis of their sexual orientation. My Administration has launched a global campaign to decriminalize homosexuality and invite all nations to join us in this effort

Gee whiz! Neither of these tweets from our president sound at all like he is wishing to repress anyone that identifies as LGBTQ at all. Unlike many of his Evangelical followers who are claiming he does.

Wait a minute!?!? I just defended a president I don’t like much. Is it opposites day?

More nonsense here from Lori Alexander, not on the rainbow flag, but more hatred and assumptions about people she knows exactly zero about, and the one sensible answer anyone has posted. 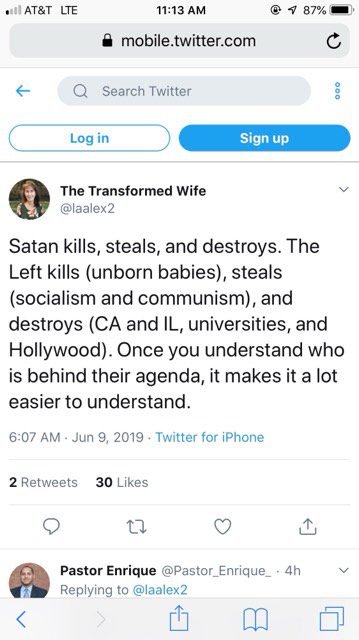 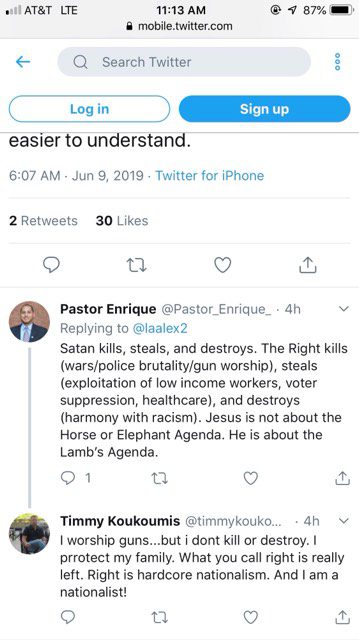 Oh snap! Called out by someone with authority over her who actually does understand that the Bible is not an excuse to demonize others. I am sure Lori will block this pastor and remove his comments.

Make no mistake about it. We are in a political war with those like Lori, like the many people approving the flag ban, against racists, white nationalists and like Doug Wilson.

Doug has been lately beating his drums and gums to repress the rights of anyone not his color and type of Christian:

This is to be distinguished from those circumstances where the secularists are demanding that believers use their expertise in such a way as to glorify a sinful activity—cake bakers, photographers, florists, etc. That is a place where the totalitolerant are demanding that we participate in the sin directly ourselves, which is not lawful, as opposed to participating in an economy which has markedly sinful elements, which absolutely is lawful. “I wrote unto you in an epistle not to company with fornicators: Yet not altogether with the fornicators of this world, or with the covetous, or extortioners, or with idolaters; for then must ye needs go out of the world” (1 Cor. 5:9–10

). Doing business with a fornicator is fine, unless the business concerned is helping him fornicate. A Christian app developer can build an app for a widget company that is owned by someone who is immoral. But the app developer may not build that guy a plug-in for his Tinder app to help him score more often. This is not complicated.

What Doug, Lori and others do not get is that asking someone to do their jobs in the public sphere is not forcing them to somehow ‘participate in sin’ There are plenty of things most of us learn to deal with in our jobs that we do not necessarily approve of, but we do our jobs. Even if it’s to hang a flag in honor of those very different than us.

Notice Doug’s demonizing and disrespectful language, he tries to dehumanize the LGBTQ community by acting as if they are all deranged criminal sex fiends coming from your honor.

When did being considered an Evangelical Christian become more about hating others than existing in loving tolerance for all? Jesus himself hung around with tax collectors and ladies of the night without tossing hate and judgment at them. Shouldn’t his followers be doing the same?

Seems pretty clear to me that hating others that are different isn’t so much ‘Biblical’ as it is demonic.

June 10, 2019 Take the Abuse Because Jesus?
Recent Comments
22 Comments | Leave a Comment
"This is late, partly bc of my preoccupation and partly bc I'd been slowly reading ..."
Jennifer Serena’s Serenity – Luxury Hotel, Birthing ..."
"Thank you for your commitment to truth and love, Suzanne. Best wishes to you and ..."
Meredith Anne Not a Goodbye, More of a ..."
"For what it's worth, I've learned a lot from you about a Very Creepy movement ..."
Gwen Pryce Not a Goodbye, More of a ..."
"Unfortunately, this kind of satire (if it even is satire) is what gives Christianity the ..."
Emily Is Biblical Gender Roles a Big ..."
Browse Our Archives
get the latest from
Nonreligious
Sign up for our newsletter
POPULAR AT PATHEOS Nonreligious
1