Yesterday morning I saw this pile of words on one of Lori Alexander’s social media and just saw red. Why? Ken Alexander, Lori’s husband, is sounding off about what he thinks is the sole cause of poverty.

Ken styles himself as some sort of Biblical authority, but thankfully his reach is small. The last thing that people existing below the poverty line need is a pompous puling pontifical pile of upper middle class white entitlement spewing nonsense. Ken, of course, had never experienced true poverty, and like so many with no real knowledge of it decides to make it a moral failing, like the Victorians and their workhouses, and the current crop of Republicans. 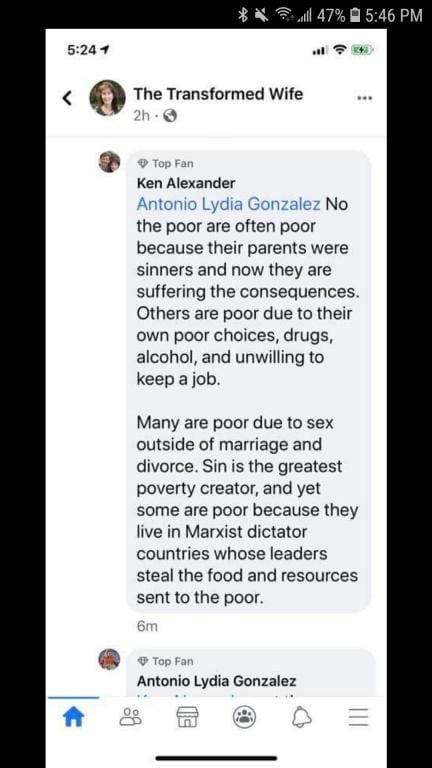 Jesus literally wept! I am guessing that Ken does not seem to realize that the deity he claims to worship, Jesus, spoke out about the poor many times and it was not to blame them for their poverty. Jesus hung out with the poor.

One of the things I’ve been thinking about recently is poverty worldwide, but especially in the developed world. The policies of our government, have always stacked the deck towards those with money, and put a larger tax burden on the middle class and the poor. We’ve seen erosion of safety net programs, like the food stamp programs, and Medicaid.

Through my years in Quiverfull I have observed that the majority in the church following the same religion tended towards some pretty extreme poverty. As self created as what Ken is alleging. When you treat education as ‘evil,’ have more children than you can feed, and are unable to get a decent job while insisting all women not work, think insurance is a form of gambling you are usually going to exist in very tight circumstances. The type of poverty where all it takes is one unexpected bill to make you homeless.

My recent reading has shown me too that our country has always had that implicit bias against the working poor, all the way back to the beginning. The Homestead Act, giving poor farmers who gutted it out for several years on land never able to provide sustenance farming, free land had a rather high failure way. If you look at the reality of a writer beloved by Evangelicalism, Laura Ingalls Wilder, you will see a story that is grinding poverty, running away from debts in the middle of the night, near starvation, want, needs unmet and an existence right on the knife’s edge. Anyone that thinks the Ingall’s poverty is charming hasn’t looked beyond the illusion to reality. “Prairie Fires: The American Dreams of Laura Ingalls Wilder” by Caroline Fraser is an excellent read about the problems of extreme poverty that existed in the small farmer class then and now.

For Ken to claim it all boils down to poor choices and sin is so racist, classism, and clueless at the same time. Ken’s never missed a meal, never had to worry if he should pay his electric bill or buy the books for his classes, worried about feeding, clothing or housing his children. I doubt he’s ever done without. He lacks any ability to understand that poverty is a much more complex problem than this. His lack of compassion is frightening, in a religion where Jesus had nothing but compassion for the poor.

So what has been proven to pull people out of poverty? Education. It is the single determinate towards being able to leave poverty behind. In the U.S. unlike literally every other developed nation education is beyond anyone living in poverty because of costs.

Also giving to the poor helps. According to a study by The New Leaf Project, connected to the University of British Columbia, giving cash to the homeless does help them become stable. It helps them pull themselves up out of homelessness, not getting them another high, contrary to the thoughts of many like Ken.

Whenever I see someone like Ken, privileged out the wazoo, financially secure start whining about poor people I just want to see them dropped from their comfortable lives into the kinds of third world poverty you see in Haiti, or parts of Africa. Without a wallet or funds. Dropped some place like Nicaragua where the poverty levels are awful, the middle class has fled, and people are selling family heirlooms and precious antiques for pennies just to feed their families.

I can assure you that this type of poverty isn’t sin or poor choices. It’s so much more complex than that. So much for loving everyone like Jesus said. Even if you believed it was sin and poor choices wouldn’t you try to reach out in compassion and help the poor make better choices, extend a helping hand? Funny, this stands in diametric opposition to yesterday’s book about impoverished Serena.