Ritual Nudity for the Insecure

“I would have approached you sooner, but I was a little freaked out about the skyclad thing,” Erin says to me self-consciously. “I’ve got some body issues.”

Erin was just invited to circle with Foxfire’s outer court, after hanging out with us in open Pagan spaces for about the last year. I figured she would ask me about my coven eventually—her personality just fits—but some seekers have to spend some time warming up to the idea. There are still those who are hell-bent on Gardnerian Craft straight out of the gate, but I find that most people are looking for something that they can’t quite articulate. Then they stumble into a Gard and things fall into place. Whatever the case, one hang-up almost always rears its head: ritual nudity.

Here’s a secret, seekers: practically everyone struggles with the skyclad thing initially. It’s normal, and it doesn’t mean you’re unfit for Gardnerian training.

Here’s another secret: body insecurity is not the exclusive domain of one body type (which, to be clear, is not to say that all body issues are equal). I don’t know a single person who doesn’t struggle sometimes. I hated my body when I was an overweight teenager. I still hated it when I lost the weight and became a competitive athlete. I always thought I was fat. I hated my skin, I hated my butt, I was ashamed of my self-injury scars, I cried in every dressing room, and I succumbed to all of the weight-loss-cellulite-cream-bullshit that people profiting off of my self-hatred could throw at me.

It was working skyclad that helped me to finally overcome a lot of those insecurities. 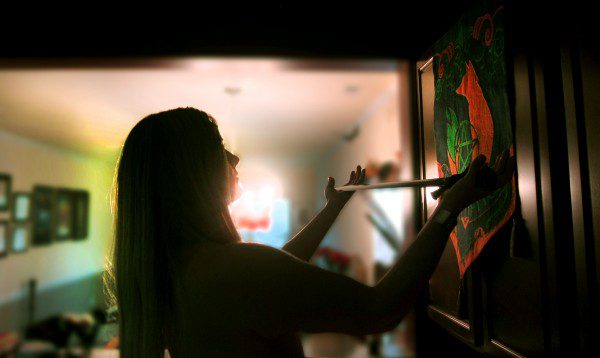 Skyclad ritual is supposed to be uncomfortable at first. It’s transgressive (as is witchcraft itself). It’s a magical trigger that signals to whatever woo-receptors in your brain that you’re up to something. Skyclad practice is part of the process of separating from the mundanity of your day-to-day. It’s also a sign of the profound trust that is required for successful work in a coven (regardless of tradition, I think).  Not to mention it’s just hella fun.

There are a number of reasons that various people cite for skyclad ritual. For some, it’s a reference to the Charge of the Goddess and the proclamation to be naked in your rites as a sign of freedom. For others, it’s about the erasure of hierarchy (which never really flew with me, because we have plenty of other ways to indicate rank in circle, not to mention that the state of one’s naked body is often an indicator of socioeconomic class, among other things). It’s also a symbol of our reverence for the physical. We revel in our bodies and our sexualities. Some practitioners insist that clothing inhibits the flow of magical energy, though I’d be more inclined to attribute that problem to practice. We can condition ourselves to work in whatever circumstances necessary, I think.

Obviously, there are plenty of good reasons to practice clothed. When it’s cold and rainy outside, you better believe I’m gonna be wearing something. Furthermore, when it’s your body at stake, it’s your call. No one should be trying to force you into something that you don’t want to do. It’s okay to choose to work robed or in street clothes. Just take that as an indicator that a particular tradition, coven, or coven leader just isn’t for you.

But there is value in being productively uncomfortable in Craft. You should be challenged. There’s an awful lot of emphasis in popular Wiccan literature about “just doing whatever makes you comfortable,” but this doesn’t serve anyone. A teacher or covenleader who simply caters to your comfort level is doing you a disservice. Witchcraft is necessarily about breaking boundaries. It should make you uncomfortable sometimes. That’s how you know you’re growing. That’s how you can begin to measure achievement. If what you’re doing doesn’t impact you deeply, that’s when you’re doing it wrong, in my mind. That looks like different things to different practitioners, but “what’s comfortable” is for people maintaining the status quo.

Years of practicing skyclad with people I love and trust has taught me to value my own body in ways beyond the typically prescribed self-love routines. Just the act of seeing other naked bodies engaged in something positive—without concern for culturally prescribed standards of beauty—does something to alter our (usually unrealistic) expectations for ourselves. It makes us stronger witches, because we develop the power to be at ease (more potent, even) in our own skins, regardless of what they look like or what they can do. Believe me, Gardnerians are just as fat, skinny, scarred, hairy, variously abled, and prone to body image hang-ups as anyone. We just take it off anyway. It was a struggle for plenty of us.

If you really think that the people in your coven are going to ridicule you, take this as an indicator that you’re circling with the wrong people. In good ritual, the focus is on the work at hand. Not on your body. The sooner you learn to focus on the magic and not on what you think other people are thinking (because they’re not thinking what you think they are), the sooner you can start feeling like a badass witch who’s up to something amazing.

Are there are other ways to trigger that magical shift? Of course. But this one’s pretty great. And it often comes with the added bonus of a healthier body image. If Erin and my other seekers leave Foxfire with only that, I will have done something worthwhile.

April 21, 2015 What good is Gardnerian Wicca?
Recent Comments
0 | Leave a Comment
"These are all really interesting to hear, and it is something I ponder as I ..."
Weaver Beginner Books that Don’t Suck
"My great-grandmother was a Mooney, down in Conecuh County, Alabama."
Jennifer Chappell Saying Hello to a New Year
"Hi Gordon, maybe if you try to put your hand and pen above the line ..."
Carolina Norambuena A Witch’s Guide to Fountain Pens
"You touch on it a bit, but how similar, in your experience, are pagans when ..."
Chris Mann Talking to Gods
Browse Our Archives
Related posts from Oathbound