What good is Gardnerian Wicca? 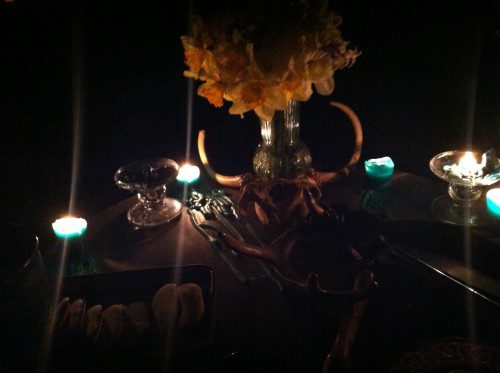 When I was in my first year of graduate school, I took a class in atheism. An unusual offering in American religious studies programs, I was interested in the treatment of atheism as a (non)religious category. Most of my friends at the time were atheists (as is common amongst academics who study religion) and I grew up in starkly secular spaces. It seemed worthwhile to visit the subject formally, and in some way beyond the tired New Atheist vs. American Evangelical deathmatch that’s typical in popular media.

We spent a lot of time debating the value of religion in the world. We read Dawkins and Hitchens, Hume and Marx, Dennett and Sagan, and took turns playing devil’s advocate, wrestling with the role that religion has played, for good or ill, in human suffering, war, scientific progress, systematic oppression, and environmental destruction. Many of our class atheists (and most of those we were reading) were quick to describe a monolithic entity called “religion” that is responsible for practically every social and environmental ill you could think of. Religious students rebutted with (variously trustworthy) data about charity, insider jargon about souls and the infallibility of the Bible, and the stoic insistence that truth must be “personally experienced” rather than empirically determined.

I don’t even have words for how boring these conversations were.

If there’s anything I’ve learned through studying religion, it’s the futility of pretending that it’s a definable thing with neat boundaries that make sense to everyone involved.  Talking about the good or evil of “religion” mostly entails a lot of abstraction and argument over definitions, and by that point I’m already halfway to the bar.

Aside from our debates being overplayed, moronic, or just too loud, I always felt excluded. I mean, I’m absolutely a theist (and not all witches are, of course), but I didn’t feel like I was the sort that we were always discussing in class. And I certainly didn’t feel any kinship with my religious classmates.

Gardnerian Wicca doesn’t have a set of commandments or an orthodoxy. We adhere to a body of rites and a set of practices, as opposed to a body of beliefs. Our tradition lies in doing. My Wicca doesn’t tell me how to vote, where to spend my money, or how to fight injustice. It doesn’t tell us how to educate our kids, what it means to be a “good” or “bad” person, or how to deal with jerk coworkers. We don’t have social programs (except for what happens during cocktails after circle). We don’t have a central authority representing us or mandating some standardized belief system. We don’t tackle the problem of evil in any coherent, shared way. We aren’t refuting evolution en masse (or at all, but I didn’t actually take a poll) or trying to justify any particular political position. In short, Gardnerian Wicca doesn’t really collectively function the way a lot of other religions seem to function.*

Overwhelmingly, none of the arguments we covered in class concerning the inherent goodness or evil of religion really applied to me. On top of that, I’m just not much of a theologian. I have plenty of beliefs about the gods, and I sometimes contemplate Big Life Questions (particularly at that bar I mentioned), but for the most part my day-to-day is filled with the sort of banalities that the Ultra Spiritual often pretend don’t exist:

I worry about being underemployed. I struggle to find affordable healthcare options and sometimes forgo filling prescriptions because I can’t afford them. I deal with the emotional fallout of abuse and assault, years after the fact. I go to work and come home exhausted and discouraged at the horribleness of what I see happening in the lives of the elementary school children I tutor. Then I have to find time to maintain my home, my relationships, and my sanity (and, as a white American with an education and a mostly supportive family, my life is easy relative to practically everyone else on the planet).

I wasn’t born into religion, and I certainly wasn’t born into Gardnerian Craft. So if I don’t get quick answers to Big Life Questions, social and educational resources through ministers, churches, or private schools, or even a prepackaged worldview, then what the hell am I doing?

It’s not particularly mysterious, in my case.

I’ve struggled with depression for as long as I can remember. Part of it is wonky brain chemistry. Part of it is PTSD leftover from a long-term abusive relationship suffered in my twenties. Part of it is just the fallout of growing up being fat and weird in a prep school modeled after—I’m pretty sure—Lord of the Flies. Suffice it to say that sometimes the hardest thing about the day is just talking myself into getting out of bed and putting on a face like everything is perfectly normal. The more time passes and the more work I do, the easier things get, but sometimes it’s still pretty rough. Back when I was first exploring Wicca, and then again when I was initiated as a Gardnerian priestess, things were especially hard.

At first, as a young teenager, Wicca simply made me feel like I had some impact on my own life. It gave me some sense of agency I hadn’t had before. Even now this is an important component to the value of witchcraft in my life: I’m never totally powerless. I always have something I can do about any given situation, even if it’s just to make myself feel better in the moment.

Years later, as a Gardnerian priestess operating my own coven, I’ve enjoyed the added significance of an incredible, chosen family. My initiating high priestess and high priest are two of the most important people in my life. They’ve seen me through crippling depression, shitty relationships, moving to a new city, finding my way in the Craft, and starting (and finishing) graduate school. They’ve celebrated with me, given me plenty of well-timed pep talks, and split countless bottles of wine. I also have Craft siblings and cousins, each of whom is closer to me than most of the people I’m related to by blood. And my Queen is the nearest thing to a grandparent I’ve ever had. I don’t have enough room to tell you how amazing she is.

Gardnerian Wicca has given me some of the closest bonds I’ve ever had. My life is full of brilliant people who support me, and, since I’ve gone beyond my own coven and immediate family, I’ve met many more who’ve offered their experience, their homes, and their time. All because we’re part of something bigger than any one person’s practice. I’ve never experienced anything like it.

So even though Gardnerian Wicca, Wicca as a whole, and Paganism more broadly have collectively spurred a lot of awesomeness (you can read details in the other essays for this discussion), the things that have really mattered to me don’t seem so significant in the grand scheme of things:

My Craft is sometimes the only thing that gets me out of my head and out of my room, fully functioning. It got me through school and gave me a footing in the workforce. What started out as an adolescent dream about personal agency turned into actual, measurable power over my own life. And it’s given me a family, to boot.

Everything else is just gravy.

*Obviously, individual Gards find ways to use the tradition to support personal beliefs, including various political causes, social justice movements, ethical positions, etc. I don’t write any of this to say that there aren’t beliefs resulting from the practice of Wicca, only to observe that these are not inherent, universal, or required. I can and absolutely do use my Craft to inform my values and vice versa.

April 26, 2015 How to Spot a Terrible Coven
Recent Comments
0 | Leave a Comment
"These are all really interesting to hear, and it is something I ponder as I ..."
Weaver Beginner Books that Don’t Suck
"My great-grandmother was a Mooney, down in Conecuh County, Alabama."
Jennifer Chappell Saying Hello to a New Year
"Hi Gordon, maybe if you try to put your hand and pen above the line ..."
Carolina Norambuena A Witch’s Guide to Fountain Pens
"You touch on it a bit, but how similar, in your experience, are pagans when ..."
Chris Mann Talking to Gods
Browse Our Archives
Related posts from Oathbound