What if I get my period in a skyclad circle? 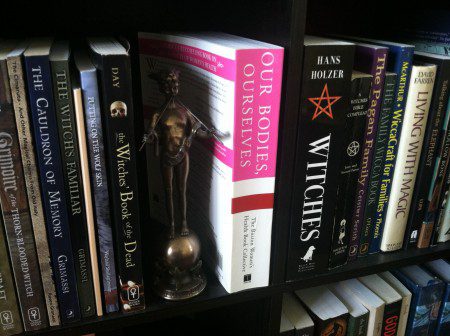 The one time I’ve ever seen a discussion concerning practical techniques for dealing with menstruation during skyclad ritual appear on a Wiccan e-mail list, the inquiring woman was told (by a man) that the topic wasn’t appropriate. Pretty fucking bizarre given that we’re so often collectively going on about reproduction, sex, the naturalness of birth and death, the glory of the feminine divine, and the power of the high priestess. But what have you. I’d mostly written that particular list off already, so I remained quiet and internally recommitted to never silencing such intimate questions in my own coven.

If menstrual blood and talk of periods makes you uncomfortable, you might, frankly, reconsider your interest in Wicca. There’s an awful lot of vagina stuff going on in Paganism generally (even in the non-heteronormative and non-Wiccan versions, I’ve found), and menstruation is part of the package for many of us. At the very least, it would be worthwhile to examine your discomfort, particularly if you’re someone who menstruates. And if you’re uncomfortable with me talking about my own period, then I’d like to take this time to inform you that I’ve been having one for years and am only just now mentioning it. I’d also like to use the word “vagina” at you again.

But seriously, you could have surmised this all on your own.  Many of the other people in your life also have periods. Some of them are having them right now.

Thus does my disclaimer end.

Whether or not you think your period is a gift from the Goddess or you hate it because of crippling cramps (both of which are valid feminist positions, as far as I’m concerned), there’s a fair chance that, as a woman/menstruating person, at some point you’ll have to deal with it in circle. What happens when your coven practices skyclad?

It’s actually not the big deal that it sounds like, I’ve found.

I’ve been a tampon user pretty much the whole time I’ve been getting a period. My solution is simple: I tuck the string into my vagina. Bam. Magic. I suppose if I were really liberated, I’d just leave the string hanging (remember the horror surrounding that picture from The Village Voice in 1995?), but I don’t like to advertise what’s going on between my legs any more than I like to be on Wiccan lists (actually, I’d much rather talk about my period). It distracts me.

When you’re ready, you can simply insert a finger and pull out the string. Ta da! All this time you’ve been bleeding internally and nobody suspected. You’re basically a chameleon.

I know some folks who cut the string off, but I’ve never found this to be necessary. As long as the tampon is inserted far enough into the canal (OB brand tampons are great for this because they’re wide rather than long and don’t start hanging out as they absorb blood), the string isn’t going to go anywhere. If you choose to cut the string off, you may have to remove the tampon manually, which can be a challenge if you’re a) not very dexterous or b) afraid of your own vulva. As a reminder for those of you who have forgotten or who never had sex education (a disturbing number of people, I’ve found), if you can’t easily remove a tampon for any reason, do not panic. There’s nowhere for it to go. You’re perfectly safe. Just relax and try again later.

I would also recommend giving the Diva Cup or its many variants a try. It’s reusable, cost-effective, comfortable, and totally inconspicuous. Plus you’ll end up with a few tablespoons of perfectly good blood—never a bad thing for a witch.

What about external options? I know some witches simply choose to wear underwear in circle when they’re menstruating, pad and all. Some will cover all this with a sarong or other kind of special skirt (personally, I’d go for an animal hide and work it into my ritual costume somehow—this just sounds awesome). You might also simply keep a towel with you in circle to sit or stand on, depending on what you’re up to that night and your own level of comfort. Let me put it this way: the decision to put black rugs in the Foxfire Covenstead was a practical one, not an esoteric one.

I’ve never heard of a coven having any kind of formal policy one way or the other. Our people make their own choices in how they deal, and the rest of us accommodate them as needed. Your body, your call.

If you use pads because you’re afraid to try an internal method, however, I would encourage giving it a shot. It can be totally life-changing, allowing you to do pretty much anything you’d do if you weren’t menstruating (except put things in your vagina). If you use pads because you’re afraid of your vagina—because I know you’re out there—I would refer you back to my disclaimer.

Human bodies are complex, oozing, often gross, totally glorious things. Whatever our individual bodies may include, there’s a fair chance that yours sometimes does things that make you either embarrassed, self-conscious, or just fucking weirded out. The beauty of skyclad ritual is that it can help us come to terms with a lot of those things and realize that we don’t have to be ashamed of them. Your coven is not there to judge your body and its assorted activities. Whether we’re talking about menstruation, boners, what you choose to do with you body hair, your weight, your skin color, how many limbs you have, or what your body is capable of.  The point is to revel in your body, not to demonize or dismiss it. And, when you get to know your body, the things you think are gross start to be less so. Which in turn makes other bodies less gross. Everybody wins.

(As a sidenote, women, I would recommend owning a copy of The Boston Women’s Health Book Collective’s Our Bodies, Ourselves, which has saved me from all kinds of scary, mysterious shit throughout the years. In fact, everyone else should own a copy, too.)

[This blog originally appeared at www.thornthewitch.com on December 8, 2014.  I’ll be back to new stuff—and washing my hair—once finals are over.  ]

(Hey, by the way, did you know I have a Twitter now?  www.twitter.com/tarotskeptic)

April 25, 2016 Wiccan Deal-Breakers: Signs to Look Elsewhere
Recent Comments
0 | Leave a Comment
Browse Our Archives
get the latest updates from
Oathbound
and the Patheos
Pagan
Channel
POPULAR AT PATHEOS Pagan
1

What It Means To Put Your...
John Beckett
Related posts from Oathbound