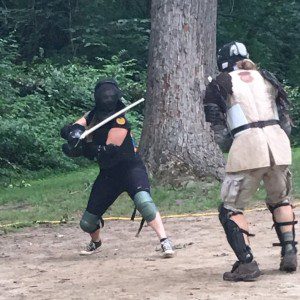 I love blades. A lot of witches do (Jason Mankey wrote a whole book on witches and their blades earlier this year, by the way).

I get that weapons of any kind freak some people out. I’ve also met witches who don’t use athames because they feel that they’re inherently violent, or because they just find them unnecessary. Plenty more just don’t like them, and that’s cool. There are certainly other ways to get things done magically. My own love for blades didn’t really develop out of witchcraft, anyway, even though it’s become an integral part of it. My fascination was initially a pragmatic one:

A good knife is one of the most useful tools for daily living. From preparing food to building other tools, there are few things better than a good, sharp knife. I always have at least a pocketknife on hand. If I’m in the woods or working around the yard, I’ve often got something a bit bigger, too. Some of those knives are relatively unremarkable, but others have taken on magical associations, which provides me with an easy way to incorporate my Craft into daily living. Aside from my athame and my ritual sword, I’ve also magicked my skinning and gutting knives, a pair of axes, and an antler-handled knife that lies around the covenstead for whatever needs cutting. I’ve found that the mindful use of these other tools in my mundane life impacts my attitude toward the magical use of blades in general.

I think there’s a tendency amongst blade-wielding witches to forget that the athame and the sword aren’t just for directing energy, bestowing blessings, or to serve as representations for abstract power and authority. In a variety of magical systems, blades are there to defend the magician on astral planes. They’re weapons.

Personally, I’ve taken this a step further than preparing a meal or pruning a bush with a magical blade. Given that physical and astral realms are reflections of each other—and maybe aren’t really separate at all—proficiency with both the sword and knife as weapons is part of my practice as a witch. Their power isn’t an abstraction or purely a metaphor. And I keep them sharp.

A few months ago, I began practicing HEMA (historical European martial arts). Like many, I’ve started with the longsword. This has completely altered my relationship with the sword that I’ve been using in circle for years. No, I’m not busting any moves while skyclad (at least none you need to know about), but I love knowing that I could. It’s made my handling of the sword more confident and more adroit. I respect it more, because I know—from direct experience—what it’s capable of in the physical realm. I know how to wield it in a way that can only enhance my magical use of it, and that lends me authority in magical spaces that augments what I already have as a priestess in my tradition. It makes me feel powerful.

As a woman, this feeling of confidence and power is especially important to me. Even amongst my liberated sorors, I still see a tendency to rely unnecessarily on the strength of men. Don’t misunderstand me—I love the men in my life. But as a single woman who lives alone, hundreds of miles from my father, brother, and even my working partner, I can’t count on having someone taller and stronger around to do what needs doing. I’m not over here changing my own tires and climbing my own ladders because I want to make a political statement about gender. I’m doing it because if I don’t, it won’t get done.

So when my able-bodied girlfriends come over and can’t open their own jars, I confess to feeling a passing twinge of disdain.

A woman taking care of shit around her own house shouldn’t be remarkable, and it certainly shouldn’t warrant commentary. But I still have neighbors who will exclaim in wonderment at me for mowing my own lawn. Like I’m out there training a bear to ride a unicycle or something.

Well, pardon me, but who the fuck else is going to do it?

I take you on this little tangent because this attitude informs my approach to weapons.

If someone breaks into my home while I’m sleeping or attacks me in the parking garage, I need to be able to do something about it.* There’s no one to check downstairs for me, or to notice if I don’t come home on time.

Being armed doesn’t always make a difference. But the fact that I can actually use the weapons around my house (and in my bag) in more than a magical capacity makes me feel better. It’s something. When I was a teenager, an uncle taught me how to use a handgun. I’ve never particularly cared for guns, but his argument sticks with me: “You don’t have to like them, and you don’t have to own them. But you should at least know how to disarm one safely, just in case.”

As a witch, it makes sense to me that we should have mastery over our tools, whatever they are. First, it makes them less scary. Second, it makes us more capable out there in the world (physical or not). Recently, for me, that’s meant sword training. I love any opportunity to combine magical practice with day-to-day life, and this has been a particularly fun one. I’ve made a lot of new friends, I get a lot more exercise, and it’s surprisingly scholarly (there’s way more reading involved that I ever anticipated). And all of that makes me stronger when I’m wielding a blade in circle. 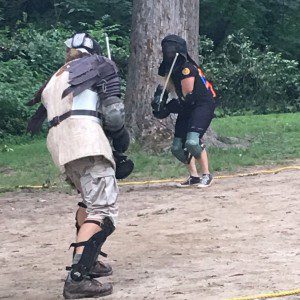 *I get that this issue is complicated. It’s bullshit that freshman women are sometimes still required to take orientation seminars on campus safety and self-defense, where student men don’t receive complementary education, especially with regard to consent. It’s also bullshit that we’re still blaming assault on anything that the victim does or doesn’t do. No one should have to learn to handle weapons, master a martial art, or be able to run a mile to get away.

July 22, 2016 Experience: It's Not a Contest
Recent Comments
0 | Leave a Comment
"YESSSSSSSSSSSSSSSSSSSSSSSS!!! <3"
Laurie How to Not Meditate
"To be honest, I often really wish that the pagan community could support a professional ..."
William Neumann The Pressure to be a Professional ..."
"Interesting. Personally, baby witches excite me. It brings to mind someone who just came into ..."
JarredH Baby Witches?
"I stopped practicing witchcraft(or whatever the heck it is) when witchcraft started practicing me. I'm ..."
IvanTheHare But is it witchcraft?: Me and ..."
Browse Our Archives
get the latest from
Oathbound
Sign up for our newsletter
POPULAR AT PATHEOS Pagan
1

Pros & Cons of Honoring Our Unpleasant Dead
As much as we may want to, our biological ancestors make up...
view all Pagan blogs
What Are Your Thoughts?leave a comment
Copyright 2008-2020, Patheos. All rights reserved.