Life in Books: Growing Up Pagan, Nostalgia, and Goth Craft 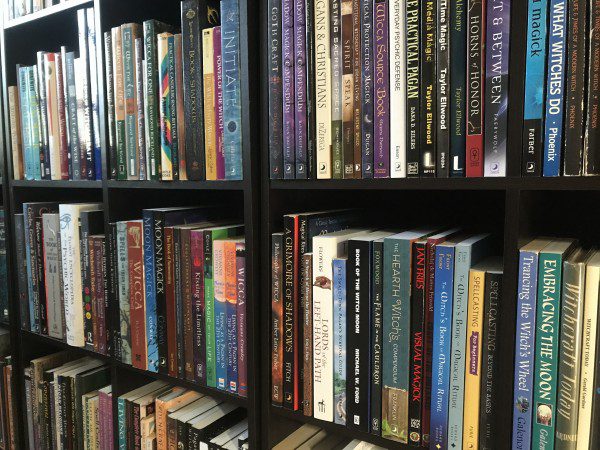 In a flurry of industry, I spent last week finally organizing my personal library. I put on my newest favorite podcast, SouthWind Charm, poured myself a whole lot of wine, and sang the Alphabet Song over and over again while deciding whether Charles Leland’s Gypsy Sorcery and Fortune Telling belonged with his other books in the witchcraft section (for the sake of ease) or with secondary, academic sources (which, okay, maybe sort of gross, but possibly more accurate).

I got fired from my college library job for taking too long to do basically everything because I would get distracted actually reading books, and so this was a much more time-consuming project than it might have been. But I had a lot of fun revisiting titles that I haven’t flipped through in years. I picked out a few that have impacted my practice in significant ways and thought I’d share, in the order in which I read them: 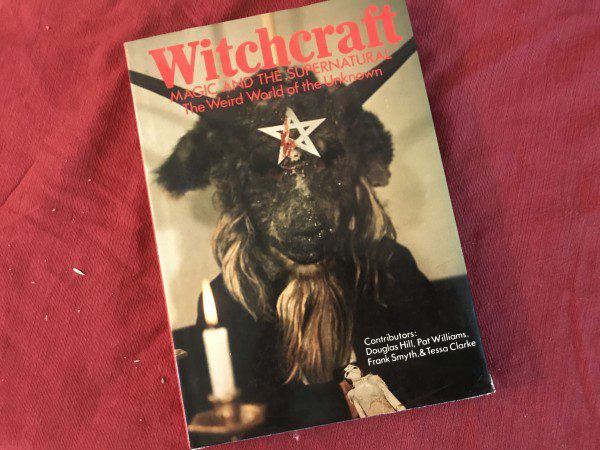 Witchcraft, Magic, and the Supernatural: The Weird World of the Unknown by Douglas Hill et al.

I found this book in a cardboard box in my aunt’s attic, shortly after my grandfather died. I was probably in the first or second grade—too young to have any real handle on what it was about—and was fascinated by the pictures. It lived in a pile on our family bookshelves, and I revisited it in the fourth grade, reading just enough to get basically everything wrong but to also fall in love with the stories about young Janet Farrar, Maxine Sanders, and the other priestesses who made Wicca famous in coffee table books over the decades.

I’ve written about this book plenty. It was my first book about how to practice witchcraft, and it holds a special place in my library, despite whatever faults it may have, because I may not be where I am today without it. I still use RavenWolf’s charm for finding lost objects and enjoy flipping through this book when I’m feeling down and need a pick-me-up.

I remember reading this book on the Metro on my way to school. Where RavenWolf was practical, matter-of-fact, and motherly, Fiona Horne was like my older witch sister explaining sex to me and teaching me how to smoke cigarettes at recess. It was enchanting and titillating, and I felt like I’d stumbled into something totally secret and totally mine. I was determined to pull off her “seven-day magickal retreat” which promised to turn my boring life around, but I could never manage chakra meditation. I was also totally envious of all of her pet snakes.

Practicing the Presence of the Goddess: Everyday Rituals to Transform Your World by Barbara Ardinger

I can remember buying this book at Woman’s Wish, the metaphysical shop in Occoquan, Virginia, back when I was a junior or senior in high school. The shopkeeper, Arlene, recommended it to me. I’d matured a bit and was interested in moving beyond the craft of magic and actually meeting this Mother Goddess that everyone was always going on about. The Pagans I knew talked about gods—usually just called “the Lord and Lady”—but no one had a lot of advice for me as to who they really were. I thought this book might point me somewhere. In reading it, I realized that this wasn’t the deity I was really interested in finding. I didn’t feel included in this particular kind of femininity. That was certainly a direction, though, so mission accomplished.

Rocking the Goddess: Campus Wicca for the Student Practitioner by Anthony Paige

I read this well-timed book as a freshman in college, and it got me totally jazzed to start a Pagan student organization and Go Meet Others Right Fucking Now. These efforts always sputtered out, but I met lots of unusual people in the process. It wasn’t in print for long, but this book also occupies a warm place in my innards. The fact that it was written by someone about my age also made me feel like maybe someday I could write books. 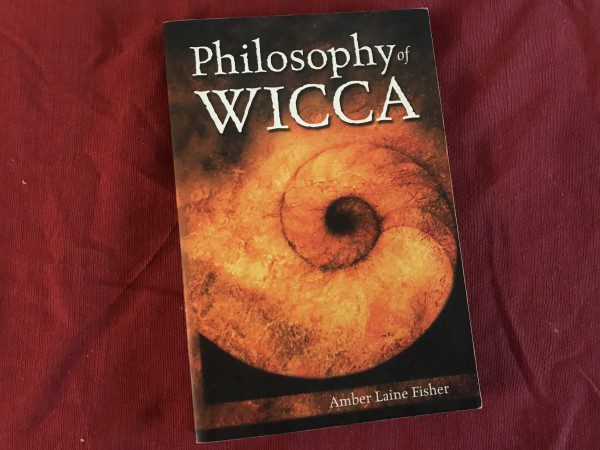 Man, I thought this book was so deep at the time. Like, Soul Asylum “Runaway Train” deep. My copy is dog-eared and highlighted, and I remember thinking what a relief it was to read something that really seemed to go beyond spells. I also remember being super impressed that it had been written by someone who had only been practicing for a handful of years—less than I had at the time. While it’s not my cup of tea now (because now I drink whiskey, though my college self was convinced tea would make me more spiritual and choked it down on the regular), this was the first book that really got me thinking that Wicca could be deeper than what I’d seen so far. I’ve also found that hardly anyone has even heard of it.

I saved up and bid on this book on Ebay, which was a new thing. Gardner’s books were pretty much impossible to get for most of us at this time, but I was determined to read them all. My friend Rachel let me use her account to bid, and I mailed off a money order (my first) to pay for it. Owning it and reading it made me feel weirdly legit as an occultist.

The Triumph of the Moon: A History of Modern Pagan Witchcraft by Ronald Hutton

This book blew my doors off, as it did for many of us the first time we read it. OH GOD SO MUCH OF WHAT I KNEW WAS WRONG. I had to read and reread chapters, because it was still a little beyond my total comprehension as an undergrad with basically no training in reading history, but what I picked up that first go-round changed how I thought about Wicca. It also pushed me more surely down the traditional Wiccan rabbit hole. 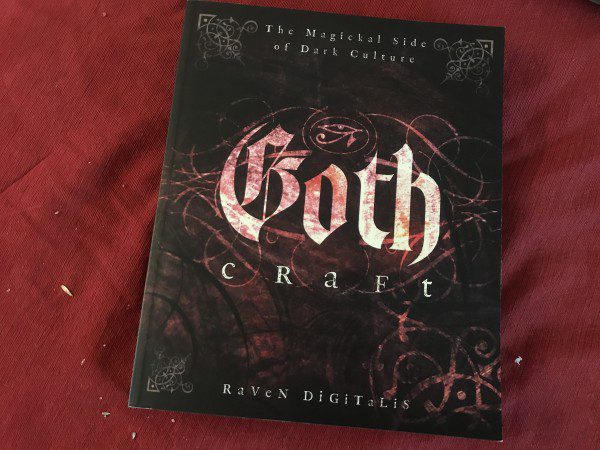 Goth Craft: The Magical Side of Dark Culture by Raven Digitalis

So the significance of this book for me doesn’t actually have much to do with its content. Shortly after college, I became embroiled in an abusive relationship with an older guy who had me pretty well convinced that Wicca was stupid, that I was stupid, and that I was wasting my life being so concerned with anything other than his Whole Foods brand of spiritual humanism (every time I eat refined sugar or I don’t buy organic fruit because it’s too expensive, I imagine him dying). One day, years into the relationship, when my witchcraft practice was little more than memory, I wandered though a Borders Books and stumbled on this title. I picked it up for the novelty, and, flipping through it while sitting on the floor, I was suddenly overcome by the realization that I couldn’t be goth, even if I wanted to. I wasn’t allowed to dress the way I wanted, speak the way I wanted, listen to what I wanted, or wear make-up the way I wanted. There are a lot of photos in this book of striking, beautiful people wearing whatever-the-fuck-because-it’s-awesome, and I was suddenly overwhelmed that I hadn’t made any of my own choices in almost three years. I didn’t necessarily want to be goth, mind, but that wasn’t the point. I couldn’t. I didn’t have the agency to do so. I cried right there on the floor, in public, suddenly and uncontrollably. It’s a story that makes me laugh now, but at the time it really rattled me. This book represents a turning point for me, and, in a very tiny way, was responsible for me finding my way home.

Her Hidden Children: The Rise of Wicca and Paganism in America by Chas Clifton

I read this book shortly after becoming a person again, and was so stoked to realize that Paganism was actually a thing that people studied. Like as a job. Pagan studies was a thing. And it could be MY thing. I remember e-mailing Chas Clifton and asking him if there were any universities that had programs I might apply to, and he sent me an encouraging response that still sits in my inbox, years later. I learned about Cherry Hill Seminary, the Pagan Studies group at the American Academy of Religion, and I started reading the Pomegranate. A couple of years later, I was in graduate school for religious studies. My life has been all over the place since then, but in many ways these years were my most fruitful.

So, yes. Getting all nostalgic meant that it took me pretty much the whole week to finish organizing my books. Now if only there was time left to actually reread them all. What books have had the most impact on you?

August 10, 2017 Going Through the Motions: Bodies in Worship
Recent Comments
0 | Leave a Comment
Browse Our Archives
get the latest from
Oathbound
Sign up for our newsletter
POPULAR AT PATHEOS Pagan
1

The Toxicity of Crystals and Ways...
Keeping Her Keys
Related posts from Oathbound