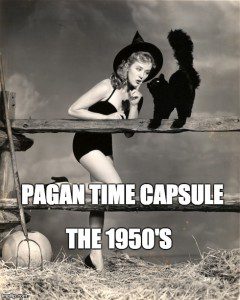 In celebration of sixty years and seven decades of Public Paganism I’ll be breaking down the essentials of Paganism decade by decade. I’ll take a look a the books, the music, and movies that have driven (and continue to drive) Modern Paganism. The items contained in many of our early Pagan Time Capsules will be a bit Witchcraft-Centric, but that will change as the decades move along. In each time capsule I’ll be placing five to six books, one movie, a few songs, and one bonus item. It should be quite a journey, so let’s get started. 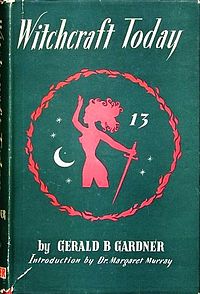 The 1950’s weren’t a great decade for books about Witchcraft and Paganism, but their very existence at the time was a minor victory in its self. There were only two books published in the 1950’s of note, but several others were especially popular (and influential) during the decade, and still are to this day. The two most important “Pagan books” published during the 1950’s were both by Gerald Gardner, and while they haven’t held up especially well, they were game-changers sixty years ago.

The first of those books, Witchcraft Today, was published in 1954 and inferred that the Witchcraft written about in Margaret Murray’s 1921 book The Witch-Cult in Western Europe had lasted into the present day. (It didn’t hurt that Dr. Murray herself blessed Gardner’s first book with an introduction.) There are great moments in both of Gardner’s Witch-books (the second being 1959’s The Meaning of Witchcraft) but there’s a lot of bad history and chapters that basically go nowhere. For all their faults Gardner’s books launched a new religious and spiritual movement, how many authors can claim that?

Also in our time capsule are some of the books which influenced Gardner and several other early Modern Witches. One of those was the already mentioned Witch-Cult in Western Europe by Margaret Murray, a book that made Witchcraft fashionable and a somewhat acceptable alternative to Christianity. My friend John Halstead believes that the author with the biggest impact on Modern Paganism was Robert Graves, and while I don’t fully agree, there’s no doubting Graves’s influence. Published in 1948 The White Goddess fundamentally altered how many people interpret mythology. The result was a wide range of archetypes that were lated adopted into Modern Paganism. Maiden, Mother, Crone, Oak King, Holly King . . . . . the popularity of those ideas is due in large part to Graves. Our final book in the time capsule is The Mysteries and Secrets of Magic by C.J.S. Thompson, published in 1927. I’m including it here because it’s one of the first books I’ve come across that looks like a Modern Pagan book. It’s got ceremonial knives, a picture of The Sorcerer from Trois-Frères in France and Gardner’s visual reference for the rite of Drawing Down the Moon. This is a pretty amazing but often overlooked book.

MOVIE
Paganism and the cinema weren’t all that close in the 1950’s but at least it didn’t always portray witches as bad. My choice for the time capsule is 1958’s Bell Book & Candle. I might be choosing BB&C because I’ve always dreamed of a way to shoe-horn Jimmy Stewart onto Raise the Horns, but it’s mostly on here for a positive portrayal of witches. It’s got spells, a feline familiar, and a witch that likes to walk around barefoot, that works for me. It was also incredibly influential, later inspiring the TV show Bewitched.

MUSIC
Witches were chanting and raising energy during the 1950’s but it was a rough decade for Pagan music. The 1960’s would see a full-scale folk revival (with dozens of records impacting Modern Paganism) but our options for the 1950’s are rather limited. One of the guiding lights of the English Folk Revival was Ewan Maccoll and his 1959 album Songs of Robert Burns would have certainly appealed to the Witches of the era. Bobby Burns was certainly no Witch, but his poems did tap into a type of agrarian paganism and are still popular with many Pagans today. People were rediscovering old English folk ballads in the 1950’s, but it would take a few years before recordings of those rediscovered (and reworked) songs would cast their spell.

Also in our time capsule is Screamin’ Jay Hawkins I Put a Spell on You. Not only is there something genuinely witchy about Spell, but Hawkins was the first shock-rock performer. He emerged from a coffin during live performances and his stage props were full of voodoo imagery. No Hawkins, perhaps no Alice Cooper, Marilyn Manson, or Ozzy Osbourne, and without those guys perhaps no Scandinavian Metal or goth rock. 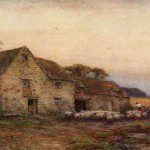 August 3, 2014
The Smaller Sabbats (Or Where did Lughnasadh Go?)
Next Post 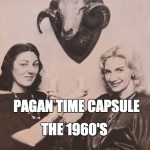 August 6, 2014 Pagan Time Capsule: 1960's
Recent Comments
0 | Leave a Comment
Browse Our Archives
get the latest updates from
Raise the Horns
and the Patheos
Pagan
Channel
POPULAR AT PATHEOS Pagan
1