4 Things People Say At Christmas (That Are Most Likely Wrong)

4 Things People Say At Christmas (That Are Most Likely Wrong) December 8, 2014 Jason Mankey

Every time a major holiday rolls around, misinformation comes around with it. I don’t think most people share bad information with the intention of misleading anyone, it just happens. The history of our holidays and the traditions that come with them are often among the most poorly researched corners of our collective past. Much of that is due to religion.

Christians battle with the pagan past, and modern day Pagans and Atheists have their battle lines drawn too. Instead of enjoying the richness of our shared traditions people on both sides enjoy tearing one another down. Ideas from pagan antiquity are Christianized and anything that can be done to marginalize little baby Jesus is thrown into his manger. I’m not a big fan of Christianity either but I’m not going to make stuff up about its founder to make myself feel better about it.

Super Holiday content at Raise the Horns:
The History and Origins of Santa Claus
The Other Gift Givers: Beyond Santa Claus
Christmas Traditions: Christian or Pagan?
Christmas Is Not Yours or Mine (On the True Origins of the Holiday)
Best Yuletide Cartoons
The New Testament and the Nativity

I see this every year, and yeah, on the surface, it seems pretty cool and all, but it just doesn’t hold up. To begin with Santa is a complex piece of mythology and has several origin points. Legends of Saint Nicholas are a very real part of his legend and they should not be ignored (Santa is not just Odin or Saint Nicholas).

Most “Santa was a shaman” stories start in Siberia and claim that Santa’s famous red and white suit comes from agaric mushrooms which are also red and white. This idea is problematic for several reasons. The first is that Santa has not always worn red and white, and while it’s not true that Coca-Cola invented that particular outfit, it is of fairly recent vintage. In addition Siberian Shamans rarely use mushrooms. 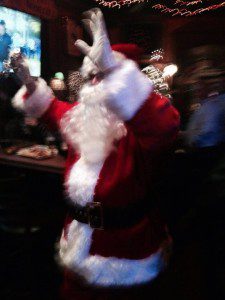 Since reindeer exist in Siberia, shamans of that area are also credited with introducing reindeer to Santa’s sleigh. This argument is even more nonsensical because reindeer weren’t introduced into the Santa mythos until the Nineteenth Century. Before that Santa/St. Nick rode a horse (most likely borrowed from the Norse god Odin!).

It is possible that the Sami people of Northern Europe contributed in some way to the Santa Claus myth (and they do have shamans), but they didn’t invent Santa.

No religion exists in a vacuum and Christianity is no exception to that. I think there are several pagan elements in the birth stories of Jesus: the star over Bethlehem, the virgin birth, the angels talking to the shepherds . . . In the marketplace of religions Jesus had to compete with pagan gods who did miraculous stuff but that doesn’t mean Jesus was a carbon-copy of Horus, Osiris, Dionysus, Tammuz, or any other god. To start with, none of those other gods were Jewish. 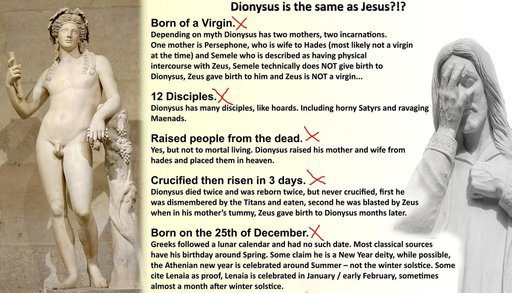 People have been equating Jesus to various Pagan gods for 150 years now, and I understand the confusion, it’s just that none of it’s really true. The idea has gained new currency because of the movie Zeitgeist which was released back in 2007. It’s a cool story, and a fun idea, but just because it’s in a movie doesn’t make it true.

I’ll start with Dionysus because I saw that meme earlier today. Dionysus wasn’t born of a virgin because his Dad Zeus actually liked having sex with people (and other deities). No one has ever claimed that Semele (mother of Dionysus) was a virgin. Dionysus wasn’t crucified either, I know books like The Jesus Mysteries make such claims, but it’s just not in the myth.

Horus is another god often compared to Jesus, but again the story isn’t quite the same. Horus is the result of the union between Osiris and Isis, as in coupling, having sex, Isis was no virgin. Osiris might have been wearing a golden phallus during coitus but there was most certainly sex going on. Horus wasn’t crucified either. There are several depictions of Horus in antiquity with his arms spread in a crucifixion-like pose, but there’s no cross, and no evidence anyone was every trying to depict a crucifixion. 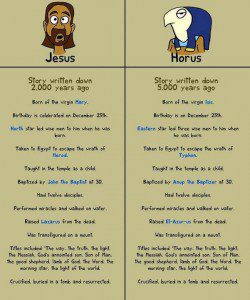 A lot of the supposed parallels between Jesus and Horus come from the pen of amateur Egyptologist Gerald Massey (1828-1907). I’m sure Massey did the very best he could do back in the Nineteenth Century but his work is not held in very high regard by scholars now or even during his own era. There’s no conspiracy here either, Massey’s work just simply doesn’t hold water. Massey claims that Horus raised an individual named Asar from the dead and that Asar translates as Lazarus. Asar is actually another name for Horus’s dad Osiris, who was brought back to life by Horus’s mom Isis. Modern writers who link Horus to Jesus still use Massey’s discredited work to do so, because that’s pretty much all there is linking the two.

The case between Jesus and Mithra is a little trickier but again there are differences. Mithra wasn’t born of a virgin, he came into this world as an adult bursting through solid rock. Mithra wasn’t crucified either, but he did kill a bull. I guess both involve death but they aren’t the same thing. Mithra’s birthday was celebrated on Dec. 25 though, and the date was most likely associated with him before it was with Jesus. Mithra ended up with the birthday for precisely the same reason Jesus did, they were both trying to get in on the birthday of Sol Invictus, the Unconquerable Sun.

One other thing that’s important to remember about all of these comparisons between Jesus and various pagan gods . . . . they’re being done to discredit both Jesus and those gods. The idea is that it’s ridiculous in the modern era to worship Dionysus, Mithra, or Horus and that if Jesus is basically those gods with a fresh coat of paint then it’s ridiculous to worship him too.

JESUS WAS BORN IN THE SPRING

The idea that Jesus was born in the Spring comes from the Gospel of Luke:

“And there were shepherds living out in the fields nearby, keeping watch over their flocks at night. An angel of the Lord appeared to them, and the glory of the Lord shone around them, and they were terrified . . . ” Luke 2:8-9 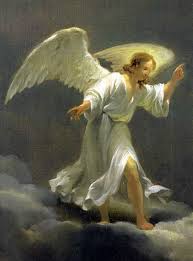 It’s true that shepherds in the Middle East are more likely to be “watching their flocks by night” in the Spring than the Winter, but just because Luke makes mentions of shepherds and angels doesn’t mean it’s true. If you think the writer of Luke got this part right, did he get the angels talking to those shepherds right too? You can’t have it both ways.

The gospels were not written as biographies, they were written to illustrate certain theological points. Shepherds hang out with the little baby Jesus because they were commoners, a theme found throughout the book of Luke. The Three Wise Men show up in The Gospel of Matthew because the writer of Matthew saw Jesus as the King of Israel, and less a man of the people. 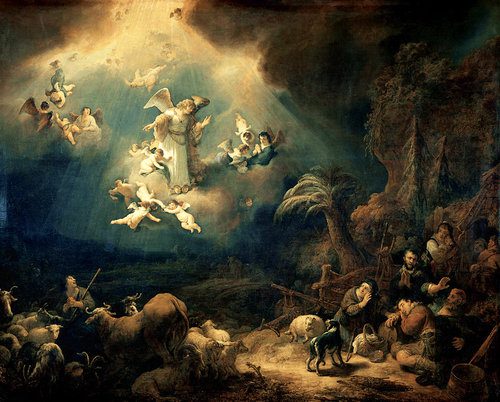 Most scholars think the birth narratives arrived to the Jesus mythology rather late too. The earliest New Testament writings, the seven authentic letters from the Apostle Paul, make no mention of Jesus’s birth; nor does the earliest gospel, Mark. The simple truth is that no one knows when Jesus was born. So he could have been born in the Spring, and he could have been born in the Winter. Luke doesn’t prove anything because the author of Luke didn’t know. He was just writing a story. 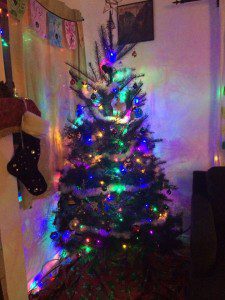 We know very little about the ancient Druids, but it seems unlikely that they invented the Christmas Tree. There were other pagan faiths that existed during their era that did use evergreens near the Winter Solstice but that doesn’t mean that the Druids did. The Romans for instance decorated with evergreen branches during the January Kalends, a holiday that would look familiar to many of us today. (Kalend is the first day of the month, the January Kalend was celebrated as the start of the New Year.)

The idea that the Christmas Tree is somehow associated with Druids comes from a Christian source. This excerpt from Christmas in America by Penne L. Restad explains the origins of the tale:

“One legend credited St. Winfred, reputed to have felled a giant oak that had been used for Druidic worship, with dedicating the evergreen tree to Christmas. ‘This little tree,’ he is said to have told a crowd of converts who looked on, ‘shall be your holy tree to-night…Let this be called the tree of the Christ-child; gather about it…in your own homes; there is will shelter no deeds of blood, but loving gifts and rites of kindness.'” 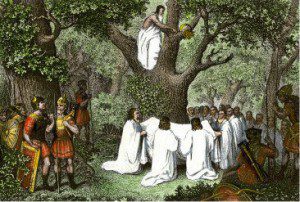 For a lot of medieval Christians the word “druid” was about the equivalent of the word “witch” meaning that people applied the term to negative magic users and other undesirables. Christians loved to tell miraculous conversion stories and this is just another in a line of tall tales. The Ancient Celts would have actually had to celebrate the Winter Solstice or some other winter holiday in ancient times to have invented the Christmas Tree, but alas, they did not. Though that doesn’t mean that the use of such trees is a completely Christian tradition.

Druids are often mis-associated with the Winter Solstice because that has sometimes been seen as the day they gathered their sacred mistletoe. In the original account of how Druids gathered the plant the author (Pliny the Elder 23-79) claimed that they performed the rite on the “sixth day after a new moon.” Only later was this somehow changed to March 1 and then to the Winter Solstice. The change is likely due to the popularity of mistletoe during the Holiday Season, a tradition that’s been in place since the days of the Roman Empire.

Christmas is a holiday rich with tradition, and that tradition comes from a multitude of sources, both pagan and Christian. No one group “owns” Christmas, and besides, it’s all what we make of it anyways! Happy Holidays and Merry Christmas! 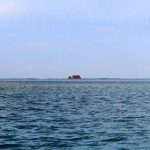 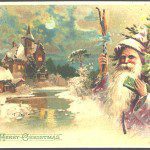 December 10, 2014 A Pagan Celebrating Christmas
Recent Comments
0 | Leave a Comment
"I can completely see Dionysus and/or Loki doing this."
Katherine Devonshire A Tale of Dionysus
"My bf and I run a podcast called The Christian and the Witch where we ..."
The Christian + the Witch Podc That’s Not Our Paganism (And You ..."
"I'll be the judge of my final destination, thank you very much, and if I ..."
Andy Blake Witch, You Vex Me
"You're right, Mark. I don't remember what motivated that response at the time, but I ..."
Craig Schumacher Of Course We Like Sex
Browse Our Archives
get the latest from
Raise the Horns
Sign up for our newsletter
POPULAR AT PATHEOS Pagan
1