Maybe I Don’t Need a Temple 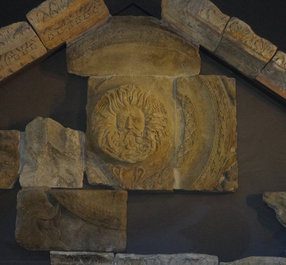 Like most of us, there are several sides to my spirituality. The two most obvious sides are my public and semi-private ones. I participate in group rituals at large events and even help run an open, eclectic, circle in my area. I think this part of my spirituality is important, and because Paganism has given me so much over the last twenty years I feel that participating in such things is nearly a duty. I also love talking with other Pagans not of my immediate tradition and such venues provide opportunities to do so.

There’s also a semi-private side to my spirituality. I practice a tradition and I operate a coven out of my house. My chosen family in tradition and coven is the most fulfilling part of my spiritual practice. When coven time rolls around at the house a chill runs up my spine and I grin like a schoolboy. I like large, public ritual, but I love the work I do with my coven and with my brothers and sisters in the Craft.

If you’re reading this blog then I assume you are plugged into the Pagan interwebs then you know all about “Modern day pagans (sic) plan to build Iceland’s first Norse tempe in 1000 years.” That link there is from PBS’s Newshour, but obviously Pagans have written about it too. This has been a pretty big deal. There’s also a swarmy article about it on the Patheos Evangelic Channel, as I said this is news. We’ve been writing a bit about it here at Patheos Pagan, and Eric (Yes! Yes!) O. Scott did at the Wild Hunt as well.

My own feelings on it are a bit mixed. I love the idea of Pagan-owned land, and yet in some fundamental ways I also don’t. At the very least I don’t love the idea of community spaces as much as some people might like. Last Summer I wrote an article here called Pagan Pipe Dreams (What Do We Hope to Build) and one of those dreams was a privately owned parcel of Pagan land:

Pagan land for Pagans owned by a lot of different Pagans. I’ve been dreaming of this for nearly twenty years now. Just imagine a beautiful meadow ringed by a few acres of trees. Within that grove of trees there’s a little spot hollowed out for we humans, a spot to sit in our very own cathedral of the pines. Back in the meadow there’s a building with some running (hot) water and a place to cook a meal or two (along with a coffee maker), but there’s more than just a bit of infrastructure.

Off to the left there’s a gorgeous hedge-maze, perfect for reflection and meditation. It’s a labyrinth walk with a bit more privacy than just a few candles on the ground. To the right there’s a series of standing stones, a perfect spot for ritual. Nearby there’s a circle carved into the ground with a spot for torches at each of the compass’s cardinal points. Near the spot where the meadow reaches the woods there are shrines to various gods: Odin, Dionysus, Athena, Cerridwen, Aradia and more! Off in the distance you can make out a large bonfire and the silhouettes of dancers moving around the fire, their steps all in time to the beats of a large drum circle . . . . . 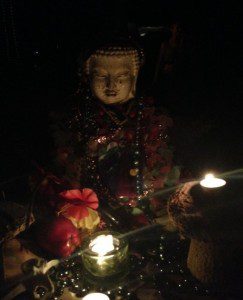 I still stand by that idea. I like the idea of Pagans owning a piece of land not too far from nowhere where we can all do our own rituals and whatever. I even like the idea of small shrines dedicated to deities on those spots, but I dream of such things as a supplement to what I’m already doing. I’m celebrating Imbolc this Friday, it’s going to rain, ritual in my usual Temple Room sounds like the right way to go. However at Lammas I’d love a chance to do a ritual with the coven outdoors, but I’m not looking for much more than that. This is why I don’t love the ideas of Pagan Temples or Community Centers as much as some people.

Just a few weeks ago I wrote something about When Wicca Is Not Wicca and one of the points made in that article keeps rattling around my head:

Wicca works best in covens, and not in groups of 200 people. Wiccan ritual was designed for small groups, and that’s still where most of the work gets done. I’ve been a part of some great large circles, and I’ve lead some powerful rituals with a few hundred folks, but those are exceptions to the rule. Wicca is really about the coven experience, it’s about participating with people one holds “in perfect love and perfect trust” and those two things are earned over time, not thrown together at the last minute.

Wicca does work best in covens, and while I prefer my covens a little larger than the traditional 13, there’s something to it. (Having a coven a little larger than 13 increases the chances that you’ll actually have 13 people show up for ritual!) Coven work is really my focus, and I don’t need or want a shared indoor space for that. Right now my coven operates in the spare bedroom of my house, and it’s full of our energy. I love Druids, but I don’t want to share ritual space with them, and most importantly I don’t need to. Wicca is designed for small, intimate groups. It’s been that way for seventy years now because it works. 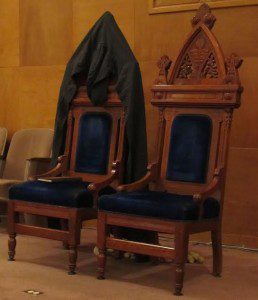 I have friends in Michigan involved with the Pagan Pathways Temple and I’m in awe of the amount of work and time they’ve put into it, but as a crusty old Wiccan I don’t know how involved I would be in something like that if it were in my backyard. I don’t want anyone to think that I don’t appreciate the effort going on there because I do, but I’d much rather take part in serious discussion with some control over who might show up and I just don’t want to see how the energy of my Pan ritual is going to mix with the Mondo Zen Service & Dharma Talk.

I also am not sure if I’d want to walk into the hornet’s nest of politics that would inevitably come with such an undertaking. There’s another reason small groups work really well: less people to argue with. I’ve seen money embezzled in Pagan groups and sometimes just the decision to advertise on Meet Up can spark a major incident. It seems like a lot of extra work that will take me away from what I think of as my actual work. It just seems like renting space at the UU Church, the park, or the local Masonic Hall would be easier, or at least less confrontational.

For all of my negativity I still think I’d contribute something if there was a Pagan building in my area (which is not likely, Bay Area property starts in the million dollar range), but I doubt I would be there all that often. The workshops I want to see are generally at festivals and the work I do under a roof I most definitely want to do in space specifically reserved for my coven. There’s certainly something to be said for “gathering up the tribes” and I love those opportunities, but it’s not where my work gets done. I hope facilitate our local open eclectic circle so people can find the small more intimate thing, that’s where my heart is these days. 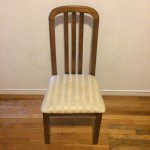 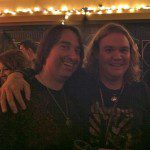 February 9, 2015 Pagan Festivals and the .25%
Recent Comments
0 | Leave a Comment
Browse Our Archives
Related posts from Raise the Horns