Locavorism as a Pagan Value

Alright, so Pagan Values Month was technically back in June–but who’s counting? Every day is a great day to write when inspired! I’ve been talking some about pagan values associated with food over on my own blog, and wanted to continue some thoughts here as well.

Paganism has historically been a set of religions tied to the land one way or another. Very generally speaking, pagan religions either had their roots in forager-hunter cultures or agrarian ones (or hybrids of the two), and so the people’s relationship to the land and its denizens informed their spiritual beliefs and practices to varying degrees. While not all modern neopagans may consider their practices to be nature-based, the vast majority of pagan beliefs and practices do have at least a historical connection to the land.

But we’re also not 2nd century French farmers or paleolithic hunters in southeast Asia. Most neopagans hail from a predominantly English-speaking Western country, have internet access and buy food from a supermarket; many of us are city-dwellers, or at least live in towns with municipal services. Our relationship to the land is, in a lot of ways, much the same as that of non-pagans in our cultures. We suffer from the same fundamental disconnection from the rest of nature as everyone else.

I’ve made it something of a mission in life to help people rediscover that connection to non-human nature. One of the easiest avenues is through our food. Lots of people manage to avoid ever going into wilderness locales or spending the night under the stars, but everybody’s gotta eat. And our diet is one of the most immediate and effective ways to be more aware of our connection to and impact on the world around us, as well as our relationships to our own bodies. Not only are we considering a very tangible part of our everyday lives, but one that is intensely personal and intimate, becoming a part of us in the most visceral way. We even may base a portion of our identity on what we eat. So it behooves us to have some idea of where our food comes from.

Ideally we can trace the origin of a meal to its source, and then follow it through its meanderings as it goes from fields and farms, to distributors and stores, and finally into our own homes and stomachs. Unfortunately, we don’t always have the exact information of where a specific egg or pound of wheat came from. Modern corporate agribusiness means that the products of many small farms end up all rolled together in one distribution center, so sometimes the best you can do for source is “Tyson” or “ConAgra”. This isn’t especially helpful when trying to get more up close and personal with your food.

Which is where locavorism comes in. A locavore is someone who prefers to eat food produced within 100 miles of where they live. Obviously this is easier in some places than others; here in Portland, it’s almost laughably easy to be a locavore, with farmer’s markets every day of the week somewhere in the city, and countless community-supported agriculture programs, local farms, and other sustainable food efforts within easy reach. Even the supermarkets often carry locally-produced vegetables, fruit and meat, among other products. Not everywhere is as fortunate or fertile, though, so we can extend the limits of locavorism a bit as needed. The point is to get food from as close by as possible, rather than relying primarily on produce shipped in from thousands of miles away, or chickens sent cross-country.

As a pagan, it’s always been my feeling that no matter what my practices are, they should be relevant to and practiced with the land I live on in mind. My ancestors may have been an assortment of Slavs and other Europeans, but I myself am an American citizen, and that’s really the only culture I know. After I moved to Portland in 2007, I became much more deeply attached to the land here in a way I hadn’t experienced since I was young, and this place taught me quite a bit about forming relationships with the soil and sky, the plants, fungi and animals, and all the other elements of my environment. It also reminded me that the human part of nature is important to consider as well, and that’s when I began gardening.

See, gardening and farming are two of the last remaining activities that get us deeply in physical contact with the land. When I am sitting in an office counseling a client or doing technical writing and editing, I am not aware of the soil and the wind; the temperature of my environment is strictly controlled. But when my hands are in the dirt and I’m coaxing a new seedling to grow, or ousting weeds, or collecting fresh produce, I can’t avoid the nature around me. I have to know whether the temperature is hot enough to require watering the next day, whether the aphids are bad enough to introduce ladybugs, and if the soil is in need of lime to change the pH. This all serves to remind me that I ma not the sole arbiter of the land, but merely someone tinkering with it just a bit to grow things to eat.

It just makes me love the land that much more, really. This is the soil that gives me life; this is the climate that allows me a longer growing season. The rain, the sun, the changing of seasons–all of these are more sacred and special because I am keenly aware of how much my very existence relies upon them. Therefore locavorism becomes something of a sacrament; I am eating of the larger region around me. My celebrations are no longer rote rituals out of a book on the Sabbats, droning on about bread and apples and wine and the cycle of the Oak and Holly Kings. Instead, I celebrate the first tomato of the season, and I mourn the loss of spinach that didn’t make it through a hot spell. I exhilarate at an overabundance of kale and how it requires me to learn new ways to both cook and preserve this prolific leafy green, and I vent my frustration when slugs destroy a squash seedling overnight. And I can taste a bit of the emotions and efforts of the farmers of the land when they bring their successes to the market; I can sample the health of their soil in the flavors of their food. They bring news from other parts of the region, one hundred miles away. We celebrate the fertility of the land together.

How many of us celebrate rituals written for lands we have never set foot on? How many of us neglect the soil we live on? More than I care to think of, even if pagans as a group tend to be more land-conscious than the general population. When so many of our rituals and customs center on food as offerings, as shared communion, as a form of hospitality, it makes sense to me that we should take more care with where that food comes from. If I am opening my home and my generosity to another, be they human or spirit, if I am giving of the most private and intimate home life to another, then I want that to have even deeper meaning. Not just “Here is sustenance to keep you fed” but “Here is a piece of the land that protects and supports me, and gives generously”. A single carrot from my garden speaks more of me and the land than a premium canned organic vegetable soup made with ingredients from scattered locations in a thousand mile radius. 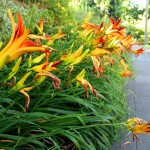 August 6, 2014 Wordless Wednesday: Urban Lilies
Recent Comments
0 | Leave a Comment
Browse Our Archives
get the latest from
Pagan
Sign up for our newsletter
POPULAR AT PATHEOS Pagan
1

Pagan
Pros & Cons with Atheist Channel Being Renamed...
Paths Through The Forests
TRENDING AT PATHEOS Pagan

The Zen Pagan Endorses Bread and Roses
Even if the Bread and Roses Party itself is never heard from...
view all Pagan blogs
What Are Your Thoughts?leave a comment
Copyright 2008-2020, Patheos. All rights reserved.