The earth’s current point in orbit places it’s orientation with the equator at a 90° toward the sun, making the sun’s rays hit the two hemispheres equally causing equal lengths of day and night worldwide. At noon along the equatorial line virtually no shadows will be cast. Globally on this day, the point where the horizon crosses the sun’s disk is due east and west. Making it a good time to figure out landmarks that aid in direction throughout the year or building projects that are reliant on the sun’s rays.

In Borealis, leaves are beginning turn colours and fall, and wildlife are preparing for winter or migrating. Harvest is in full swing, near completion or done depending on crops, weather and climate.

For the Tropics, this is when the Tropical Rain Belt is over the equator again. Coming from the Borealis Sol Axis and moving toward the Australis Sol Axis.

In Australis the days have gotten longer and now spring has arrived. Migrations are moving southward, beginning the avian mating season. The dry season is nearing an end with the imminent arrival of the tropical rain belt.

Borealis is celebrating the harvest, where feasts and giving of thanks for a good harvest is a common theme. Apples make up much of the seasonal dishes in the feasts, particularly the desert. Harvest themed songs are sung, along with music and dancing. Along with festivities revolving around the end of the Rainy/Monsoon Season.

Borealis activities around Equinox include: A man appointed to stealthily rush with the last corn neck of the harvest to the site of the feast, avoiding a lady appointed to soaked the carrier of the neck if discovered. If the corn carrier is successful then they would be entitled to take a kiss from the appointed lady; Clay doll festival, made with the dredging and de-silting clay from irrigation canals; Eating moon cake, food offerings, Performance of dragon and lion dances, writing riddles on lanterns; Making and carrying lit lanterns through the streets and other public spaces; Glutinous rice flour and rice paste are molded into familiar animals; Courtship dances where young women are encouraged to throw their handkerchiefs to the crowd, and the young man who catches and returns the handkerchief has a chance at romance; Outdoor barbeques for friends, family and public to gather.

Australis is celebrating spring, planting and new life.
Australis activities around Equilux include: Watching Puawananga (clematis) blossom and from its blossoming predicting the weather for the coming season. Where if trees flowered on the lower branches first, it would be warm and bountiful, but if they flowered on the upper branches first, it would be cold and unproductive; Begin Kumara planting once the kowhai flowers, and when the star Aotahi (Canopus) is visible in the south sky; Hanging colourful streamers in trees; At dawn, putting up Equilux flags with desires/wishes for the year marked on the flag. Flags from the previous Equilux are taken down the midnight before Equilux dawn and burned at the ceremonial fire on Equilux; Wishing Tree Ties are put up; Nesting bundles put out for birds returning from migrations; Seed starting for gardens; Poi Dancing in public spaces; Egg themed Candies are made and shared; Feather wands made by and for children to play with; Messages in hollows eggs to friends, family, and from secret admirers; Making seed bombs to be tossed in places where new plants are desired to be grown in community; Dying hollow eggs, filling them with wildflower seeds (sealed with tissue paper and wax) and decorating community with resulting eggs. Later having seed egg hunts that is an ongoing game where folks can go off to find them whenever they like. When one is found it is quickly broken on a relation, friend, or even stranger, to wish them well for the coming year – spreading the seeds in the process. 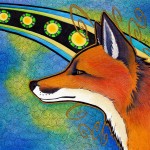 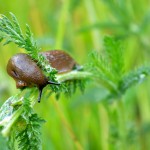 September 24, 2014 Wordless Wednesday: Brown Slug
Recent Comments
0 | Leave a Comment
Browse Our Archives
get the latest from
Pagan
Sign up for our newsletter
POPULAR AT PATHEOS Pagan
1