The Disconnect of Our Impacts – Are You Contributing To The Problem? Halloween Issue

The Disconnect of Our Impacts – Are You Contributing To The Problem? Halloween Issue October 2, 2014 Rua Lupa

A few years back I was at a retreat on a mountain sacred to the Anishinabe (Ojibway) called Thunder Mountain and a couple of us wanted to go see the water falls in the area. In the same area was a forestry operation harvesting the trees, so there were patches of cleared forests on our way to the falls. The person I was with had remarked on how horrible that was. I myself, had grew up harvesting trees on our property, had been in logging work parties with relatives, our town was a paper mill town, and when I went to college we had some forestry courses as part of the Wildlife Technician Program I was in. So the subject was close to home for me. The person making the comment hailed from southern Ontario, Canada, where it was mostly urban and suburban and had stated that they haven’t seen this sort of destruction before.

I almost laughed. I decided the better of it and pointed out how this was what a sustainable harvest looked like. “See the single standing trees marked in blue? Those trees are intentionally left to propagate the open areas and as habitat, and see how there are patches of intact forest within the cutting area? Those are doing the same thing but allow it to happen faster, otherwise its keeping special habitat areas intact. Its essentially mimicking a wildfire.”

The response was that there is no need for cutting these trees. I then asked if they use toilet paper, notebooks, writing/printing paper, read books/magazines, have wooden furniture, and so on. They, like most of us, did and still do. So I told them, “then you are a part of this.” It caused a bit of a shock and concern. The ride to find the falls was quite for a time after that.

This is the sort of thing I continually find when people get angry about “the destruction” they see. Sometimes its not as bad as it looks because the process is so foreign to them – they really don’t know how the things they use get made and there had been leaps and bounds in progress in sustainable resource harvesting. Other times, it really is as bad as it looks. But the truth is, you are a part of it. Wearing jewelry? Thank the people digging in mines with no safety regulations, no living wage, using child labour and are in life threatening conditions. Eating chocolate? Same thing, the difference is that it is in a cocoa plantation instead of a mine, using extremely toxic treatments. With workers having no protective gear inhaling and absorbing these toxins it is not uncommon to see workers seizing in the fields and get no compensation. Both have had kidnappings and forced labour. And the same sort of thing can be found in most things commonly used in conventional society. You buying something because it is cheaper than the competitor? Question why it is cheaper. 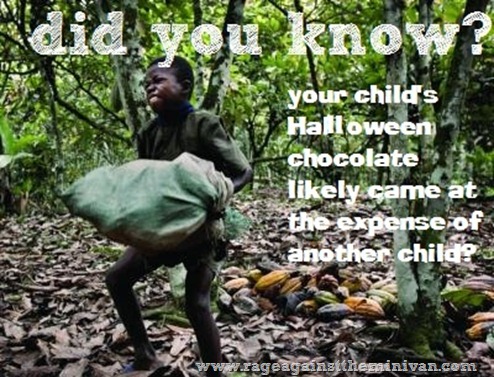 Many people don’t even want to know that they are connected to these atrocities – out of sight, out of mind. So its business as usual. But guess what that means? It means that it keeps happening and with increase demand comes increase in this kind of resource extraction. The only way to stop this sort of thing is to take a serious look at what you are buying and using – are you encouraging this sort of resource extraction? If you really want to know what your impacts are and how to improve them, here is an article that has the questionnaire you need. By seeing our interconnections laid out in front of us we can see how we can make it better and put public pressure on the right points to get it going in a better direction. The easiest is making fair-trade Eco-conscious decisions – by buying Halloween candy from business that uphold these practices. Unlike Nestle, Mars, Ferrero, Hershey, and Cadbury (US division). If we choose to willfully ignore our interconnections with harmful practices, we are no better than the people committing it on our behalf. 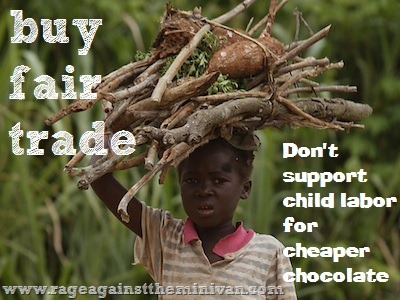 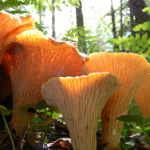 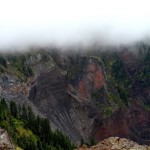 October 6, 2014 To Live Without Fear
Recent Comments
0 | Leave a Comment
Browse Our Archives
get the latest from
Pagan
Sign up for our newsletter
POPULAR AT PATHEOS Pagan
1