This is a new type of series I’m starting wherein I share a bit on the goings on in my personal quest for Ehoah (complete harmony within Nature). I plan to do this series as a periodical post. I also invite other Saegoahs to share their own adventures in their pursuits in comments below and/or as submissions to this blog (pathsthroughtheforests(at)gmail(dot)com).

So here is what I’ve been up to:

Converting the Snack Scraps Worm Bin into A Mini Greenhouse

If you are wondering about this worm bin I’ve got going on here, its a ridiculously simple system. I’ve a large pot and was reluctant to buy mass produced and highly chemically fertilized soil to use it, so I plugged the bottom of the pot and dumped in a tray from my more conventional, second hand, worm tower (being already finished soil and plenty of red wriggler worms) and started burying my scraps of snacks I had through the day in it – mostly apples and tea leaves with the periodic dashing of scraps from preparing meals. Topping it off with a wooden lid to keep the moisture in and presto! A basic worm bin.

Now, if I fed this bin all the food scraps that came out of our kitchen, then it would quickly get too wet and would need drainage like my more conventional bin has. As it is, it works great and lessens the load a bit on my other worm bin as well. At one point I had decided to hold onto a piece of plexiglass I found for odd end uses just to prolong its use instead of letting become waste unnecessarily. So I decided to make use of it here and lay it on top of the pot to let these little sprouts I started seeing have sunlight to grow, but keep the moisture in. After a few days the worms clearly became unhappy though – as the plexiglass didn’t allow air in as much as the particle board I had previously used, so they began climbing the walls and trying to get air, but stayed in to keep moist. All I had to do was move the plexiglass over so there was a sufficient gap to let enough air in and they were fine after that (pictured below).

Why Have A Worm Bin To Begin With?

A worm bin, also known as Vermicomposting, is fantastic at being regenerative – taking what ‘waste’ that would otherwise go to a dump somewhere (and dumps are becoming filled and are running out of places to be put, let alone being a linear system that is unsustainable and damaging to our ecosystem) and turning them into a resource as compost, potentially growing more food for your kitchen or simply contributing to the ecosystem. Approximately 40% of all household waste is organic material that can be composted. But this is not just any kind of compost – its the richest, most fertile kind – worm castings. Red Wrigglers (Eisenia foetida) are the recommended kind of worms to use because they are a species that is one of the most efficient at converting organic material into soil. Because it is all within a closed system it can be placed indoors, being is perfect for those who do not have access to a garden and are unable to make their own compost outdoors.  The resulting soil can be either used in an indoor container garden, or sold locally. The worms themselves can be given or sold to fishermen or to others who want to start their own bin when you gain a surplus.

Starting Your Own Worm Bin

If you want to start your own worm bin at home, all you need to do is get or make a worm bin that either has a catch basin leading to a faucet or a two bin system where one sits higher than the other and drains into the bottom one as a catch basin that is later dumped. This is a liquid fertilizer that you can feed to your house plants with 2/3rds water – otherwise this liquid fertilizer can nutrient burn your plants. If you don’t have house plants or a garden, toss it in the yard or any patch of unpaved space so that it could at least do some good (pouring down drains, including storm drains, is a bad idea as that can cause algae blooms). (Find out how you can use this enriched liquid as a libation here)

When starting out you just mulch up a bunch of newspaper and order yourself some red wrigglers online to add to the bin. Once you have your worms, moisten the paper scraps and toss the worms in, then burying your food scraps in the mulch and top it off with a breathable lid (either naturally porous, poked with a bunch of holes, or slightly off – being smaller than bin or pushed aside a little). Many people prefer to layout news paper between the pile and lid.

Now as your worm bin ‘matures’ in making soil, you can do one of two things. Divide your bin in half either by how its used or with a screen (holes wide enough to let worms through without injuring themselves – a thin board with a lot of holes (1/4″ or 5mm diameter) drilled into it should suffice). Or have a Tower wherein the bins stack and drain into one another – The bottom either being a screen or a board with as many holes as possible before the integrity of the bottom is compromised.

The tower bin method is the same thing, just filling the top one until it is full and then bring up the bottom one and fill it until it is full and so on. Repeat until the entire tower is full, then all you do is take the bottom one which by now should be completely soil, empty it in a pot, garden or sell as garden soil, and place on top as before.

To keep your worms happy have a mix of wet and dry ingredients to about 50/50. Wet would include things such as fruit and veg scraps. Dry would include things like leaves and onion skins. If you don’t have a lot of dry material, raid the paper recycling bin and shred that into the worm bin. If it gets too dry, add a bit of water. Then just make sure they don’t get too hot or too cold and they should be fine. These are warm climate worms so they would like to be in places that have temperatures you like too.

When it comes to feeding your worm bin, make sure you don’t feed it any dairy or meat products, and avoid feeding too many acidic products like orange and lemon peels. You can add leaves from the garden but that has the risk of bringing in pests – If you have leaves, that would mean having a yard, to which I recommend an outdoor composting system specifically for garden scraps. Or just embrace nature’s natural state and leave your garden rewild by leaving the leaves and clippings fall and stay right where they are.

If you do get pests, then I would recommend separating your worms from the bin, dump the rest outside or seal it in a garbage bag or store in the freezer for a week then reuse. In the meantime, your worms should be happy in a paper scraps filled, airy container and an apple core or two. Then start the process over again. We had the experience of soldier flies – which do help the composting process but they get all over the place. If you do get these guys and have chickens, put your worm bin in the chicken coop and you get free chicken feed. After doing the separation fix we haven’t had problems since.

With proper maintenance it is pretty well odorless, with the only smell being that of earthy spring soil.

And that is all there is too it really.

For More Information On Vermicomposting, View This Practical Guide That Can Be Downloaded & Printed At Home. 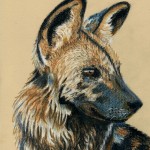 March 7, 2015 Look & Find - Chilly By The Bay
Recent Comments
0 | Leave a Comment
Browse Our Archives
Related posts from Paths Through The Forests