Some of my fellow bloggers here on the Patheos Pagan channel have been talking about their first books on paganism. One of my very first books was Animal-Speak by Ted Andrews. First published in 1993, it was already in its twelfth printing by the time I bought my copy in 1997. And today it continues to be the most popular book on animal totems out there.

It’s not surprising. Andrews, who passed away in 2009, was a prolific and talented writer, both for Llewellyn and for his own imprint, Dragonhawk. Animal-Speak is still his best-selling title, and I see it frequently in bookstores. It hit just the right combination of factors to be popular with a lot of readers: friendly and inviting writing style introducing the subject, accessible exercises to help readers get in touch with totems, and an extensive dictionary of animal totems and what Andrews thought they meant. It was clear that this was someone who had spent a lot of time in nature with various creatures and loved every minute of it–how could one not want to share in that beauty?

In the years since its publication, a lot of other books have emulated Animal-Speak and its structure. Some have tried to court readers by including ever larger and more exotic animal totem dictionaries. Others stick to what I call the BINABM: Big, Impressive North American Birds and Mammals like Bear, Eagle, Wolf, etc. Many authors have chased Ted Andrews, but none of their books have ever matched Animal-Speak‘s success.

I was inspired in a different direction. In the 2000s, I was increasingly frustrated to find that, with very little exception, the books on animal totems were basically trying to be Animal-Speak all over again, and I couldn’t find anything that didn’t pad out its page count with dictionary entries. So I ended up writing books to fill in the blanks. My first book, Fang and Fur, Blood and Bone: A Primal Guide to Animal Magic, included seven chapters, each one on a different sort of animal-based spirituality. The first, of course, was totems, but I also dedicate chapters to familiars, shapeshifting, animal parts in spirituality, and other less-observed practices. I followed it up a few years later with DIY Totemism: Your Personal Guide to Animal Totems, which went into more detail on working with these beings.

Looking back, I think I was rebelling against Animal-Speak and its runners-up. I wanted more than what was out there. I saw flaws, and anthropocentrism, and (particularly in the case of Sams and Carson’s Medicine Cards, which I reviewed here) blatant appropriation. So I tried to address the differences between what we non-indigenous people were trying to put together, and what indigenous communities have been practicing for many years. I approached the self-centered idea that just seeing an animal must mean something special to us, rather than just being a fellow being out for a walk. I encouraged people to create their own relationships with the totems without relying on formulaic “meanings” in dictionaries.

I still continue that work. I’ve been expanding my writing over the years into my work with the plants, fungi and other beings that aren’t animals. I’ve been banging the drum of environmental responsibility as a spiritual practice. And I still dislike dictionaries.

But I admit Animal-Speak will still always have a place on my bookshelf, even if it’s just to remember where my inspiration came from. One of my fondest memories was getting to meet Ted Andrews at PantheaCon 2007. I asked him to sign my copy of his book, which he obligingly did, and I gave him a copy of Fang and Fur, Blood and Bone as a thank you for sparking my interest in the first place. I’m sad I didn’t really get to know him better before he died, but I can at least count myself among the many who were touched by his work.

P.S. If you’re interested in my “rebellious” books on totemism, you can find them here on my website. 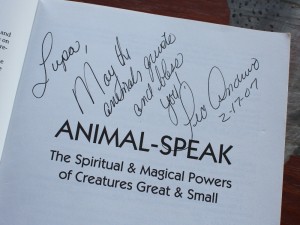 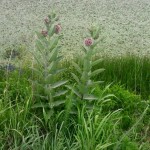 August 8, 2016 My Favorite Solar-Earth Event and Why...
Recent Comments
0 | Leave a Comment
Browse Our Archives
get the latest from
Pagan
Sign up for our newsletter
POPULAR AT PATHEOS Pagan
1

Hoodoo How We Do: Underwear Spells
Voodoo Universe
Related posts from Paths Through The Forests