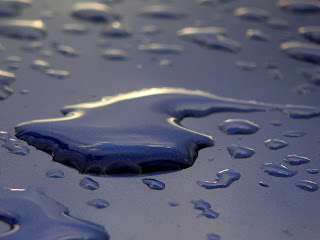 I still get emotional re-reading my birth stories, so I thought I’d share them here. This is the story of the arrival of my firstborn. It was written a few weeks after her birth. I studied a heck of a lot of stuff before my first birth, and I decided I really wanted an all natural home birth. I am not saying it is the right choice for everyone, but it was a great choice for me. I am so thankful that I was blessed with an uncomplicated birth, and I could not believe how empowered I felt after giving birth. Childbirth is still one of the most incredible experience’s of my life.

And  yes, this story has accounts of body fluids and bodily functions, so if anything like that makes you uncomfortable, proceed with caution.

We lived one state over from the state where our Home Birth Dr was, so we planned on having our baby at my In-laws home. Hubby dropped me off a week before my due date and headed back to finish his week of graduate school. So I moped around, missing my hubby and waiting for labor to begin.

Two days before my due date I was getting a lot of contractions and I think the baby dropped again. I had a long night of waking up and feeling really crampy. I felt like I could hardly walk the next day I was so uncomfortable. The next morning (Friday) I had some clear discharge mixed with a little blood. I showered and waddled around all day. I figured it was going to happen soon.

Hubby drove out that night after school, and we ate dinner at my parent’s house and then drove over to his family’s house. We ended up talking until 1 in the morning for some reason. When we finally went to bed we got to have sex for the first time in a week. (I think that’s what got things started) I immediately started having strong contractions every 15 minutes. I would wake up every 15 minutes with a contraction and look at the clock. At about 3 O’clock I woke up Hubby to tell him that they were consistent and he begged for sex again because “it might be his last time for awhile”  so in-between contractions, we did. (What can I say, we are young.) And the contractions got closer together, about 5-7 minutes apart.

The Dr came by at about 5AM and checked me and I was 100% effaced and 1cm dilated. The contractions were consistent (about every 5 minutes) all morning long they were different contractions than I had ever had before, regular as clockwork and stronger. I felt them more in my lower abdomen, kind of like strong cramps. I had planned on walking around for most of that part of the labor, but every time I was upright I would vomit for some reason. So I spent most of the first stage lying on my side and sipping water, since I wanted to stay hydrated and not throw up everything I was drinking.

The Dr checked me again at 2 PM, and I was dilated to 4cm, so “active” labor began. The contractions got more intense and lasted longer throughout the afternoon. I threw-up several times during the afternoon, I hadn’t been able to keep down food since early that morning, but I made myself keep sipping water and juice to keep from becoming dehydrated. I was starting to have to breathe and concentrate through each contraction and relax and get ready for the next one in-between. I labored in the birthing pool from 5:30 PM on and that helped a lot! The heat and being able to float a little really helped me to relax. My Mother in law rubbed my feet and my back for me here and there and that helped me relax too. I kept telling myself “this one wasn’t so bad, I’m sure it will get worse”. During each contraction I focused on releasing and relaxing all my muscles and breathing. Relaxing seemed so counter-intuitive as my body tensed for each contraction, but I could feel the difference when I let my body go. Clenching my muscles made the contraction much more painful.

At 7:30 PM the Dr came and checked me and said that I was 9-10 cm. I was shocked! The whole time I been telling myself through each contraction that it was going to get worse, I had never dreamed I would be that far since I was expecting transition to be practically unbearable. It really helped that my contractions were still about 5 minutes apart, so I had time to relax and get ready for the next one.

The Dr said that I could push at any time, so I started with little pushes here and there, they didn’t seem to do that much. I was on my knees leaning against the side of the pool with my arms (the greatest position!!) The contractions began to get really intense as the baby moved into the birth canal and the Dr tried to break my water to help things move along a little. But he could not break it! The bag was way to strong. My water finally broke at about 8:15PM and the contractions felt a little better after that, it was like they could finally work with the water out of the way. They also became much more intense.

The baby moved down to the vaginal opening and I could feel the head just inside, it felt kind of like a wrinkly fist. I had planned on getting out of the pool at this point, but after one contraction outside of the pool, I got right back in! The water felt so good, and I was tired. I hadn’t slept in over 24 hours (since I hadn’t really slept the night before!) my eyes would close in-between contractions and I would lay my head against my Hubby (who was kneeling outside of the pool). I tried sitting in the pool one time, but mid-contraction it felt so awful that I flipped over to my hands and knees again. The contractions got more intense to the point that I couldn’t NOT push through them. The baby’s head pushed against everything and started to bulge out, but I had A LOT of stretching to do!

For the next ½ hour to 45 minutes I pushed through every contraction and the head slowly crowned. It seemed like it was taking forever, sometimes it felt like the head wasn’t moving at all. I was almost falling asleep in-between contractions and Hubby would hold my head out of the water while I dozed. The Dr kept telling me “just keep doing what you’re doing” that gave me hope that it was working! I never believed that I could stretch that much! The babies head was finally completely crowned and it wasn’t budging, each contraction I told Hubby I was ready to be done now, I asked why the baby wasn’t coming out. She was completely crowned for about ½ hour, at least 4-5 contractions. It burned and stung so bad, the pressure was so intense that I HAD to push with each contraction, but they didn’t seem to be doing anything to make the baby move. My body was doing the work for me, but it was dragging me along and it was exhausting! The Dr asked if I wanted him to do small episiotomy, but I was SO CLOSE, I could feel her ears on either side of her head. So I told him I wanted to keep trying.

When her head finally came free, it was like an explosion! The whole baby, her head and body, shot out of me into the water like a torpedo! We pulled her up out of the water and I held her in my arms. She was covered in vernix, and even though she was breathing fine, she didn’t cry, she just looked at me and blinked and then she stuck her tongue out.

I sat in the water and held her for a minute or two, and even though I was exhausted that was such an incredible moment!! The pain was gone in a moment and replaced with euphoria. Such a moment of relief, joy and triumph. It is impossible to describe. My eyes tear up thinking about it. I knew than that I would do it all again just for that moment. I wish that I could re-live it over and over. Hubby had tears in his eyes. I found out later that Dr had been praying for me through each contraction. After I got out of the pool to deliver the placenta, Hubby held our new baby girl skin to skin.

So, Little Ms Action, 8 pounds, 12 ounces, 22 inches long. 13 ¾ inch head. 12 hours “pre-labor” 8 hours “active labor”, and I pushed for 1-1 ½ hours. She was born at 10:07 PM we found out that the reason her head took so long to crown was because she had it cocked to the side a little, she had a lump on the side of her cone head. I tore just a little bit, and needed 2 stitches. I was so tired, I don’t remember a lot of what happened afterwards, after I ate something and regained some energy I felt much better!
My milk took 4 whole days to come in, and that did not make baby Ms Action very happy, looking back I would have held her skin to skin more, since now I know that makes your milk come in faster. Breastfeeding was a bit of a challenge for this first time mom, things got better after the first 2 weeks, but the Lanolin nipple cream was a life-saver!

Giving birth is hands down the most empowering thing I have ever done. For days afterwards I would go through it all again in my head and marvel at how my body had really been able to do something so amazing.

Stay tune for the Birth stories of Ms Drama and Baby Girl sometime in the near future.

July 13, 2010 To Justify Compassion
Recent Comments
0 | Leave a Comment
"As a new mom, even if my daughter is a toddler now, weaning is really ..."
Lynn Toh Weaning my Tandem Nursed Toddler
"So, I came across this post for the first time today, two years after it ..."
Sheila Warner Finally Heard? The Duggar Aftermath
"Just wanted you to know that I keep checking occasionally for updates, and I hope ..."
William Burns Brave New Life: Part 7: The ..."
"> How does that make sense?It saves them lots of money."
Tim Locke How I lost my fear of ..."
Browse Our Archives
Related posts from Permission to Live