Theology in a child’s movie 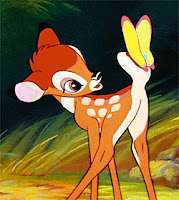 The movies “Bambi” and “Land before Time” have the same storyline in many ways. In both movies the main character’s father is either uninvolved (Bambi) or out of the picture (Land Before Time). In the course of each movie, the mother dies. And the main character in each movie learns to live on their own, making friends along the way.
I was traumatized as a child when I watched “Bambi”. One minute Bambi and his loving Mother are walking through the forest, and the next they are running in terror from an unseen evil. “Run Bambi Run!” Screams his Mother. Then there are gunshots. And we never hear from her again. His Mother is dead, and Bambi is alone. He struggles to find his new sense of normal, and care for himself.

“The Land before Time” was different. Yes, the mother still dies, but she remains a big part of Little Foot’s life. He talks to her, and she gently nudges him in the right direction. It’s as if she’s keeping her eye on him even though she can’t be there in person. Or in her own words “I will always be with you”.
Similar to the movie “Bambi”, there is something so complete about Death in the Protestant world. If you are a Calvinist, you hope that the dead person was one of God’s elect. If you aren’t Calvinist, you hope that the person really was truly saved in their heart, and not just going through the motions of living a religious life.

Depending on the group, you may believe that the dead person is at this very moment in heaven or hell, or you may believe that they are frozen in a sort of “soul sleep” until the day of resurrection. Whatever you believe, the dead person is dead. You cannot ever speak to them again, you have no assurance of where they may be, you can only hope that you will somehow be reunited in the world to come.

One of my greatest fears as a child was that my family would die and that I would somehow survive, and be left alone. When I lost my first child to miscarriage I was told by well-meaning Christians that God took my baby early so because He knew that if that baby had survived to live on this earth, they would not have lived for Him. Better to die early and go to heaven, then live on earth and risk losing their faith. In this mindset God starts to look more and more like Satan’s character in “The Mysterious Stranger” by Mark Twain. (The comparison I’m speaking of is in chapter V11, read at your own risk!)

Similar to “The Land before time”, the Catholic teaching of the Communion of the Saints is totally different. Christians who die, although their bodies are dead, their souls are alive in Christ. And whether they are in heaven, or spending some time in purification, you can still talk to them and pray for them or ask them to pray for you, just as you would any other Christian family member or friend. Here it is explained in the Catechism.

1475 In the communion of saints, “a perennial link of charity exists between the faithful who have already reached their heavenly home, those who are expiating their sins in purgatory and those who are still pilgrims on earth. between them there is, too, an abundant exchange of all good things.”


958 Communion with the dead. “In full consciousness of this communion of the whole Mystical Body of Jesus Christ, the Church in its pilgrim members, from the very earliest days of the Christian religion, has honored with great respect the memory of the dead; and ‘because it is a holy and a wholesome thought to pray for the dead that they may be loosed from their sins’ she offers her suffrages for them.” Our prayer for them is capable not only of helping them, but also of making their intercession for us effective.

I remember after watching “The Land before Time” my parents told me that Little Foot couldn’t really talk to his mother, he just thought he was talking to her, because he was so sad. She wasn’t really guiding him to the Great Valley, it was just his imagination or something. Because dead people are dead, and you cannot speak to them anymore. 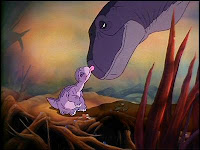 But secretly, I never gave up hope that they were wrong. That Little Foot’s Mother was still alive, watching him and encouraging him. That she would always be with him if he needed her. I loved that movie as a kid.
I think I’ve always wanted to be Catholic deep down inside.
Previous Post

July 22, 2010 I want to be confident
Recent Comments
0 | Leave a Comment
Browse Our Archives
Related posts from Permission to Live