Wavering faith and The Way 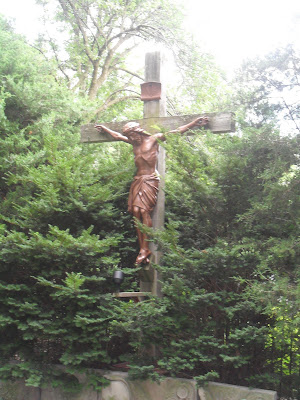 I’ve been troubled in the last few months. Struggling to believe that there is a God at all. And when I do think He exists, I don’t like Him. All the old tapes in my head from growing up. God is an angry God, destroying anyone who doesn’t measure up to whatever standards of goodness He came up with. He is so disgusted with our sin, that He couldn’t even look at Jesus when He took our sins on Himself. God abandoned Jesus on the cross.

I struggle with dread every time Sunday rolls around and I have to go to church again, to be with people who claim to serve the same God I do and yet think such different things about Him.

My Grandpa died. I love him and miss him. I still can’t believe that he isn’t going to be there the next time we go home to visit. My Grandpa wasn’t a perfect person. But when I’ve heard the sincerity of his faith questioned in the past, it has made me so angry. My Grandpa is a Catholic, and some of my relatives question whether that is “real faith” or not. They argue that you have to have a “personal relationship” with God, and if you haven’t said the magic words that they’ve come up with to prove that you have a “personal relationship”, well then we just don’t know if you are truly saved or not.

I cannot describe my feelings of rage and despair when I heard this kind of thing insinuated after my Grandpa’s death. My Grandpa actively searched for God, he was a faithful participant in his Church, I cannot remember a meal where he did not pray. In the weeks leading up to his death he talked with his priest, made his confession, received last rites, and his last words to my husband and I when we saw him one month before his death were “keep the faith”. Even if we assume that he never sad the “magic words”, or if he had not been able to make confession or get last rites before death, how could anyone ever doubt the sincerity of his faith?

Already flooded with my own doubts about whether or not God even existed, being faced by a God who would reject someone based on whether or not they’ve said the magic words or not, made me feel that if God really was a petty, bean-counting God, I did not want to serve Him.

At the Wake, I knelt by my Grandpa’s casket and wondered who is the God that my Grandpa knows? I want to know that God. The God that loves. I whispered to my Grandpa that if there is a God and a heaven, I will see him there. It’s hard to explain my feelings that day. On the way over the Church for the funeral, the deep sadness and confusion about God settled over me again. Is there a God? Does He care about humanity at all? And if He does, shouldn’t He care more about whether or not you were seeking Him throughout your life than whether or not you got everything right? What is the point of serving Him if He will turn His back on you at the slightest mistake?

As the Funeral service started, I looked at the stained glass and watched the priest and the altar boys start the service. There was a song about God being our Shepherd, a reading from Ephesians, and then the priest got up to speak, and this was the passage he read.

“Do not let your hearts be troubled. You have faith in God; have faith also in me. In my Father’s house there are many dwelling places. If there were not, would I have told you that I am going to prepare a place for you? And if I go and prepare a place for you, I will come back again and take you to myself, so that where I am you also may be. Where (I) am going you know the way.” Thomas said to him, “Master, we do not know where you are going; how can we know the way?” Jesus said to him, “I am the way and the truth and the life. No one comes to the Father except through me. If you know me, then you will also know my Father. From now on you do know him and have seen him.”

When he read Thomas’ Question, “Master, we do not know where you are going; how can we know the way?” My heart leapt, because it was my question. Where are you God? I do not know the way?
The funny thing was I already knew the answer. “If you know me, then you will also know my Father. From now on you do know Him and have seen Him.”

I want this new God to be real, I want it to be true. I want there to be a purpose for living this life. I want to see my Grandpa again someday. I want to be able to tell my children that there is a Creator of the universe that loves and cares for them and watches over them every day. I want to believe that someday I will see the unborn children that I’ve lost, that their tiny lives were not in vain, unnoticed simply because they never got to see the light of day in this world.

I have seen Jesus, and He is the way. I want it to be true, and that is reason enough to believe.

I believe, because I want it to be true.

Bigger Picture Moments is a place where we step back and take in life. This week it’s being hosted by Peanut butter in my hair. Hop over to her blog to read more about the Bigger Picture, and maybe share your own moment.