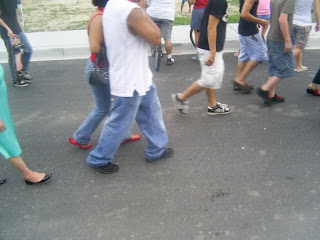 OK. That sounds a little creepy I guess, but it’s true. The other day I was sitting in the car with the kids outside the mall while my husband ran inside for something. It’s amazing to watch the different people come out of the mall and head to their cars.

One man came out of the Mall carrying a large theater popcorn, full to the top. He went to his car and drove away. It was as if he had come to the mall expressly for the popcorn.

Teenagers wander into the mall, girls with long hair reaching their waists and boys hiking up their too-big pants. Amazingly they manage to text, walk and talk with friends at the same time, without walking into walls.
A young man and an older man with matching body types and similar clothing and tattoos barrel out of the door holding take out bags from the food court. Maybe a father and son? The younger man has an unlit cigarette dangling from his mouth, the older has a mustache. I wonder what kind of food they have in the bags.

A younger couple trailed by two young girls wander out of the mall. The woman is messing with her shirt and scoops her boobs back into her bra while her husband looks on admiringly. They continue flirting all the way to their car, completely ignoring their kids.

And it must be over half of the people that are fishing for cigarettes in their pockets, or sometimes already have an unlit one in their mouths.

Sometimes I wonder what people see when I am out and about with all my babies.

One thing I have learned while people watching, is that you should keep your comments to yourself, or at the very least inaudible. Otherwise you could end up like me that time that we stopped at a red light and I was looking at the people sitting around waiting for the bus. I saw a young man in baggy jeans and jacket, wearing a baseball cap. He was sitting next to a girl and he was smoking a cigarette. I idly commented to my husband that “there was no way that kid could be 18, he looks like maybe 15”. And that was when the guy (who turned out to be a girl!) looked up from the bench and glared at me. I shrunk down in my seat until we drove away. Never underestimate people’s ability to hear what you say, even when you are in a car like 10 feet away from them!