When I put myself in Time Out

Time out is used pretty rarely around here these days. A few times a week someone may have an “out-of-control” moment and need to sit in the big chair for a few minutes with mom and calm down. But for the most part it just isn’t needed.

But recently, I was in time out myself.

I never used to swear, but after getting married I got into some bad habits of saying certain words out loud when I was angry. I was angry alot for the first few years of marriage, and only in the last year have I figured out where some of that anger was coming from and started to deal with it. I’m not really a screamer, and I have never swore at my kids. But I for sure have had to many moments where I tripped over a toy and said “shit” under my breath, or had the bacon grease splatter out of the pan and burn my arm and have a “dammit!” slip out.

When I started to notice Ms Action’s vocabulary increase, I knew it was only a matter of time before she picked up the “bad words” too. And you’d think that would have been enough to make me get better at holding my tongue! But no. I kept slipping up, no matter how many times I told myself I should stop, I would find myself swearing again like a day later.

And one day (surprise! surprise!) I over heard her swear when she was struggling to zip her stubborn backpack shut. She had figured out that swear words are used when you are frustrated. At first it was kind of amusing to watch her say “dammit” when her block tower fell over, or when she couldn’t get her buttons done up right, the stuff that frustrated her was so dang funny! 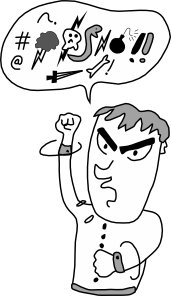 After a few days, it got me thinking. I bet my frustrations are just as silly looking. Is there really a difference between a stuck zipper and a slip on wayward toy? The kids were probably watching me and wondering why I was frustrated, but they had still learned their lesson well.

So I started trying to watch my mouth. And when I heard one of the kids swear I would remind them that those are not nice words to say and give them a different alternative to dealing with their frustration. And then one day we were driving in the car. Ms Drama was screaming because in her words “her sock was not right!” And nothing I was saying was getting through to her. Ms Action was strapped in the car seat next to her covering her ears and grimacing at the loudness, when all of a sudden she yelled “ BE QUIET DAMMIT!”

I was floored. I think I blushed. I had thought that we were OK since I had never modeled swearing AT someone. But… Ms Action was frustrated, and she was expressing that frustration. I knew that I had to get a little more serious about the swearing problem. 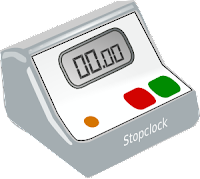 So I instituted a one minute time-out for swearing. I would remind Ms Action that we should not use those words, and if she said them again she had to sit in time out. After two time outs in one day, she was getting more serious about remembering, and even reminded her sister once that “we don’t say dammit”. And then the cheese grater took a chunk out of my finger, and I slipped up.

The kitchen was silent as both toddlers stared at me. Then Ms Action reminded me that “we don’t say that word.” I stood there for a moment, embarassed. Fighting the urge to say “I’m the adult and I freaking hurt myself!!” (Why does this stuff happen to me so often in the kitchen!?) And all of a sudden I knew that I had to have the same consequences that they did. Yes I am the adult, but that doesn’t mean I can do whatever I want. How could I enforce a rule that I didn’t follow myself. So after I put a band-aid on my finger I marched over to the timer and set it for one minute and sat down in the chair.

The kids all gathered around the chair and stared. “Mama’s in time out?” asked my 2 year old? “Yep” I responded matter-of-factly, “ Mama said a bad word.” My 3 year old giggled and added “because we don’t say that word!” I smiled, “ No we don’t say that word, it’s not a nice word to say.” Both of them smiled and nodded. “You hurt your finger Mom?” asked Ms Action. “Yep, I hurt my finger and I was upset.” “Are you OK?” Ms Action continued. “I kiss it!!” Ms Drama offered excitedly, kissing the band-aid.

The timer rang and I got up. And to my amazement, that was the last time I’ve ever heard either of them swear.