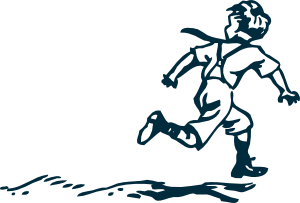 Recently at a church event, I was playing on the floor with my 2 youngest children and watching another young mom bundle her infant into her car seat. The woman’s 2 year old son (whom I will call “Kayden” in this story) was jumping excitedly in circle singing something to himself. Mom turned to son and asked him to grab his boots and put them on, Kayden hopped energetically over to the rug where all the snow boots were lined up and grabbing one boot in each hand spun in a circle with his arms flung out.

Unfortunately, my 4 year old daughter Ms Action was standing close by and got whacked in the chin by one of the swinging boots. She looked stunned for a moment, and then trotted over to me to show me her chin and get a hug, no real harm done.

But Kayden’s Mom seemed horrified. “Kayden!” She hissed, grabbing his arm. “You’re a bad bad boy! You hit her in the face with your boot! That’s a no no!” And she aimed a few swats in the general direction of Kayden’s legs.

As soon as his mother had grabbed his arm, Kayden dropped the boots and flopped on the floor with a vacant half-smile on his face, seeming to completely ignore his mom.

After her hug, Ms Action stood next to me and watched in fascination as Kayden’s mom continued.

“You’re a bad boy for hitting people!” She dragged him across the room to where we were standing. “Say sorry Kayden!” she demanded of her son. Considering how young Kayden is, and the fact that I have never heard him say anything intelligible made me wonder how she expected him to accomplish this. “Kayden! Say sorry!” Kayden continued to hang limply from his moms grip and stare off into space. “Kayden, say sorry or we won’t go to Grandma’s!!”

I felt so awkward. I mean, the whole thing had been an accident, something I would anticipate from a cute energetic little boy. I would have never expected a 2 year old to apologize, or even be called a bad boy for something he never intended to do. I thought that maybe his mom would have told him gently that his boot had knocked into someone and then modeled how to ask if my daughter was OK. I wanted to reassure her and say “Oh it’s no big deal”, but I hesitated because obviously it was a big deal to her. I didn’t want to add to her embarrassment by appearing to be condescending. I mumbled something about how Ms Action wasn’t hurt and looked at my 4 year old hoping that she would pipe up with something witty and forgiving to make this whole thing stop. Instead, she hid behind my leg.

Kayden’s mom prodded her non-verbal toddler once more, “Say sorry Kayden, did you say sorry!?” and then she dropped his arm and walked back to where her infant was waiting in the car seat. After a moment Kayden hopped up off the floor and skipped away. Ms Action looked up at me in confusion, but I had no idea how to explain what we had just seen.

I felt completely unsure as to how I should have responded in this kind of situation. I wasn’t sure how to reassure an embarrassed young mother and help the incident blow over peacefully. I felt so bad for her. I’ve been where she was, overwhelmed by 2 small children, so worried about how their actions made me look as a parent, hoping that by looking diligent in punishing my kids I was making up for any harm they may have done. But it’s been a several year journey from there to where I am now. How could I summarize that understanding in just a sentence or two?

What do you do when your child gets hurt by someone else’s child? How do you handle observing awkward parenting moments that are more about the parent’s embarrassment than any wrongdoing by the child?

February 21, 2011 Knockin' on Heaven's door
Recent Comments
0 | Leave a Comment
"As a new mom, even if my daughter is a toddler now, weaning is really ..."
Lynn Toh Weaning my Tandem Nursed Toddler
"So, I came across this post for the first time today, two years after it ..."
Sheila Warner Finally Heard? The Duggar Aftermath
"Just wanted you to know that I keep checking occasionally for updates, and I hope ..."
William Burns Brave New Life: Part 7: The ..."
"> How does that make sense?It saves them lots of money."
Tim Locke How I lost my fear of ..."
Browse Our Archives
get the latest from
Nonreligious
Sign up for our newsletter
POPULAR AT PATHEOS Nonreligious
1

How Toxic Christians Are Destroying Christianity...
Roll to Disbelieve
Related posts from Permission to Live