We made frosted cookies with sprinkles together. 4 year old Ms Drama said “This was so much fun Mama!” Awwwww.

That would be a facebook status version of what happened last night. Now I’ll give a little more detail so you realize what goes one behind the scenes of the average mother’s facebook status. 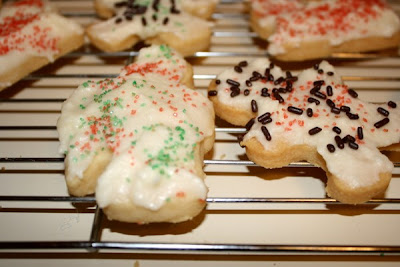 For starters, we didn’t even make these particular cookies. We were given a box of day old baked goods, which included a box of plain sugar cookies with the frosting and sprinkles to add on your own. We got home around lunchtime, and I put the box of cookies up high to deal with later. We had also received a small tray of day old graduation cupcakes, frosted with terrifyingly bold black and red frosting. The kids begged to have a cupcake after lunch, and I acquiesced and distributed one highly colored cupcake a piece and which they ate happily then ran off with respective red and black goatees that wouldn’t wash off their faces to spend the rest of the day dismantling the house as usual. The afternoon was long, and humid, and fairly ordinary, except I didn’t feel like making dinner, so we settled on frozen pizza instead.

Later after dinner, we got out the box of cookies. I gave each child a paper plate, and a plain cookie, except for Ms Pooky for whom I first frosted the cookie. Each of them spent some time decorating their cookie to their hearts content, and then they all requested a new one. So I frosted a new one for Ms Pooky and turned to give a new one to each of the other girls when I discovered Ms Action had taken the fresh cookie I had just handed Ms Pooky and was putting sprinkles on it herself. She had left the container of sprinkles far to close to the edge of the table, and Mr Punk (whose one year old arms are incredibly long) obligingly pulled it off the table and dumped it all over the floor and his head. All three girls gasped in horror over the loss of the precious sprinkles, but after shrieking something about not leaving things near the edge of the table, I turned to the cabinet where I happened to have some leftover sprinkles from a recent birthday and the crisis was averted.

So I frosted a new cookie for Ms Pooky and handed it to her, which caused a major eruption Ms Action who claimed that Ms Pooky had already gotten a second cookie. (Are you still following this?) I explained that I had seen Ms Action take her sisters cookie, so that cookie counted as hers and Ms Pooky needed a new one. Ms Action burst into tears and wailed at the top of her lungs. I asked why she was upset. I tried to explain the cookie ratio again. I resisted the urge to throw the rest of the cookies on the floor and stomp on them. And since could feel myself getting angry I crunched over the piles of sprinkles on the floor and announced that I was taking a break and ran down to the bedroom to sit on my bed and take deep breaths. Haley took over supervising the cookie frosting. But Ms Action’s wailing continued and within a minute I could tell Haley wasn’t doing any better than I was, so I finished my re-centering and walked back out to help quickly frost a new cookie for each child. Things calmed down after that, and each child ate one of the decorated cookies at the frosting and sprinkle covered table while I put the remaining cookies in a container.

Ms Drama sighed happily and said “That was so much fun Mama!” I smiled, and that was when we all noticed around the same moment that Ms Pooky was leaking neon purple and black poop out of her diaper, down her legs and up her back. (You knew those cupcakes were going to reappear didn’t you?) Everyone got excited and made lots of comments on the color of the poop, and the complete direness of the situation. Haley attempted to remove Ms Pooky’s clothing, which only spread the poop around more. We then put Ms Pooky into the bathtub (which promptly turned the water blue) and Haley started a load of laundry of everything touched by the neon poop, while I discreetly disposed of the rest of the toxicly colored cupcakes and swept up the sprinkles. Then we brushed every one’s teeth thoroughly and put them all to bed. Everyone did come out clean and healthy in the end, although this morning another child gleefully announce that her poop had turned the toilet green, and Ms Pooky’s goatee doesn’t appear to be going anywhere, but I’d say this was a relatively successful effort to do something as a family with 4 small children.

June 18, 2012 Hate the Sin, Love the Sinner?
Recent Comments
0 | Leave a Comment
"As a new mom, even if my daughter is a toddler now, weaning is really ..."
Lynn Toh Weaning my Tandem Nursed Toddler
"So, I came across this post for the first time today, two years after it ..."
Sheila Warner Finally Heard? The Duggar Aftermath
"Just wanted you to know that I keep checking occasionally for updates, and I hope ..."
William Burns Brave New Life: Part 7: The ..."
"> How does that make sense?It saves them lots of money."
Tim Locke How I lost my fear of ..."
Browse Our Archives
Related posts from Permission to Live