A couple of weeks ago, noted evangelical Richard Cizik posted on “My Journey Toward the ‘New Evangelicalism.'” Cizik was vice-president for governmental relations at the National Association of Evangelicals–and by “was” I mean  “is” in the past tense, as in “no longer is.”

In 2008, Cizik was interviewed on NPR’s “Fresh Air” and said some things that his boss at NAE and some influential evangelicals did not like. In Cizik’s words:

In a broad-ranging conversation about my work to educate my fellow evangelicals about the impacts of climate change, I told Terry Gross, the host of NPR’s “Fresh Air,” that I could support “civil unions” for gays and lesbians and that government funding of contraception was morally acceptable as a way to avoid abortion.

OK, that’s pretty out there, you have to admit, for a veep at a politically engaged national evangelical group with serious Republican leanings–even one who had been with the organization for 28 years. It didn’t help that Cizik committed the even worse offense of saying he voted for Barak Obama in the Virginia primary in 2008 (and by implication in the presidential election).

What happened next? National evangelical leaders grouped together to demand his resignation; he was disinvited from speaking at Houghton College and serving on an advisory board at his alma mater, Denver Seminary; he was ostracized by friends and his church. Then in time he “got resigned” from NAE, which is a nice way of saying, “You’re fired but you can say you resigned if you want to. As long as we win and don’t let the screen door hit you on the way out.”

What seems to have hurt Cizik as much as anything is how alone one can feel when challenging the evangelical power structure:

For most evangelicals who dare to differ with their fellow evangelicals over issues of politics, there’s no one to come to their defense. Personal friendships or relationships are frayed, sometimes even broken.

Indeed. When the powerful are challenged, few of the masses will stick their necks out publicly. That is understandable, since there is much to lose–but it’s still discouraging.

Cizik’s situation is normal, not news–but it is a story that has to be told again and again.

In the world of evangelical Christianity, public figures have to walk on tiptoes. They are verboten to say what is on their mind and heart if what they say does not support the ideology of those in charge:  those with microphones, TV cameras, and deep pockets. It doesn’t matter how carefully they have thought about it or how much they have earned the right to speak of it–“don’t make them angry.”

I can’t imaging Jesus saying, “Yes. Bravo. Exactly. Use your political power to crush your brother and sister, because, as I never grow tired of telling you, the only way forward for the gospel is to gain as much political power as possible. Well done.”

Cizik feels the message being sent by his firing is: “We are controlled and intimidated by the Religious (that is, Political) Right and will do whatever it takes to avoid their criticism.”

Christians doing what they have to do to avoid criticism from the powerful elite.

Seriously? Do I have to draw you a map? Leaf through the Bible. The prophets and Jesus did the opposite. They put the powerful and elite religious leaders in their place. The ones armed with their Bibles and power base, who say they speak for God–those are the ones Jesus and the prophets told to sit down, stop talking, and learn a little humility.

These people shouldn’t call the shots. They should be called out for sub-Christian behavior.

What Cizik sees in the political sphere certainly translates into areas like academic freedom in evangelical schools–by which I mean not “the freedom do think anything you want” but the freedom to explore collegially, patiently, and thoughtfully, pressing issues without guaranteeing a predetermined conclusion, and have the support of your bosses and colleagues in doing so.

Part of the problem is that evangelicalism is so co-opted by ideology–be it political or theological–where dissenting voices are simply silenced, which is the mark of all fear-based regimes. This is what happens when you marry faith and politics: the former gets taken over by the latter.

And that just ain’t right. Ask anyone, today or in the long history of Christianity, who has ever been threatened–emotionally, economically, or physically–by those who claim they speak for God and have the political power to make it so. Political bullying causes pain. In the history of Christendom, this list is long and lamentable–and the evangelical journey is littered with its own casualties.

Cizik is looking for a new way of being evangelical in the political arena. Can faith transcend present political ideologies? Heck, 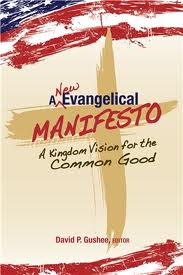 forget “faith.” Can Christians with strongly opposing political views just get along now and then and try to remember that American politics is not an all out battle for “the Kingdom of Heaven?”

For that to happen, there has to be some ideological realignment in evangelicalism–which means nothing less than letting go of older battles and moving forward. This goes for politics and academics alike. The problem is that “older battles” define the movement. So, the question is whether the “new evangelicalism” Cizik wants can actually exist, or whether what he is working toward means leaving evangelicalism behind altogether.

…and whether any of this can be done without further politicking.

I think that last part is what Jesus is really interested in.

, edited by David Gushee and released by Chalice Press in August.

September 24, 2012
Outgrowing Evangelicalism: It's Not Just for Scholars Anymore
Next Post