what is “safe” and “not safe” to think? (part 3 of Bovell’s review of The Lost World of Scripture) 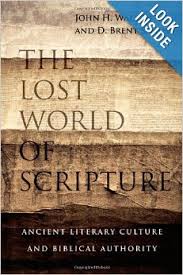 Inerrantists are indebted to Walton and Sandy for the time and care they took in their new book Lost World to explain why the doctrine of inerrancy needs to be updated in light of development in biblical scholarship and for suggesting that inerrantists should begin thinking about ways to incorporate the Bible’s oral culture into their doctrinal schemes.

Today I conclude with a few remarks on how they decided to draw their discussion to a close.

I was disappointed to see that, rather than encouraging students in their research to critically pursue the leads proposed in the book, the authors seem intent to protect them from pursing the implications of the data they just presented. I understand that the authors are not at liberty to disagree openly with the Chicago Statement, and so perhaps this should come as no surprise.

The book ends with two lists for their readers to keep in mind as they think about scriptural authority. The lists explicitly advise students as to what is “safe” and “not safe” for them to believe.

So while on the one hand Walton and Sandy are trying to alleviate some of the pressures that students face when doing biblical studies, they also feel pastorally obliged to set express limits on what students can think about the Bible, putting them, in effect, right back where they started.

Walton and Sandy include some sensible items in their list of things that are “safe” for students to believe (293–303), for example:

These are important points and need to be stressed. There are some other items, however, that Walton and Sandy present as “safe” for students to believe, but without sufficiently discussing them. For example:

On the first point, although the inspiration of the NT is hardly contested for their readership, the examination of the nature of the NT should probably have awaited a separate treatment rather than abruptly included in this list.

The second point is true, though “reporting events” already subtly privileges the evangelical assumption that events are being “reported.” I went to great lengths in my book Rehabilitating Inerrancy in a Culture of Fear to argue that nothing is restricting the biblical authors—even when they appear to us to be writing history—to be “reporting events.” They could very well have been intentionally creating a narrative, or thinking they were reporting history but weren’t, or operating under very different notions of what “reporting events” even means.

Third, the manner in which OT prophecy is “fulfilled” in the NT is also an issue that, again, most believers would agree on. But hermeneutically speaking, this “fulfillment” is a complex issue that cannot be tacked on like this, especially as it does not seem entirely germane to the topic of the book

The following, according to Walton and Sandy, are “not safe” (i.e., dangerous) to believe:

Many students working through scholarly issues in these areas (orality, ANE mythology, documentary history of the Bible, the epic nature of some historical narratives, pseudepigraphy) will not likely be appeased by merely being told “it is not safe” to believe them.

This begs the question, “Why?” and the answer seems obvious: It is dangerous to believe them because they cause serious problems for the theory of inerrancy, and undermine particularly the Chicago Statement of Biblical Inerrancy.

I would also add that referring to these issues as “beliefs” rather than considered, intellectual conclusions aids, perhaps unwittingly, to removing them from the sphere of honest academic discussion.

Walton and Sandy end the book with one last list, a list of questions that they regard as safe for students to ask (306–309):

It is safe to ask

To take just one example, it has not long been acceptable for an evangelical to declare to fellow evangelical believers that the OT is permeated by Old World science. What drove that shift, which I can say without fear of contradiction, is the irony of the impact of critical biblical scholarship that showed evangelicals that not only was it safe to ask but also safe to believe in such things.

It would certainly seem wiser, then, especially for the sake of students to not tell them in advance what “it is not safe to believe.” Much rather, we would better serve them by encouraging them that it is always safe to ask and to test whether the Bible might turn out to be this or that.

Evangelicals need to get out in front of what’s happening in biblical studies instead of lagging a generation or two behind and waiting to see what critical scholarship discovers before deciding what sorts of things are safe or dangerous.

The problem, as many of us know, is that this has proved exceedingly difficult for evangelicalism to pull off.

February 4, 2014
what are biblical genealogies and what do they do? (guest series by Denis Lamoureux)
Next Post