Don’t believe the meme that there’s no difference — this is a key presidential election November 5, 2012 Phil Fox Rose

I hadn’t planned to write another post before election day, but someone expressed a view last night in conversation at church that I think really needs addressing: that it doesn’t matter if you vote or who you vote for because there’s no meaningful difference between the major party candidates. Some friends on both right and left this year have argued on moral grounds against voting for either candidate. I don’t agree but I respect their arguments — and gave my own thoughts on them here. But what I do not find acceptable or respectable is this argument that they are the same. It has been a meme on the far left since before the word meme existed. I believed it myself when I was working in third-party politics (and maybe at that time — Bush Sr. v Dukakis — it was close to true.) Ralph Nader said it repeatedly in 2000 of George W. Bush and Al Gore when his candidacy indisputably caused W’s victory. I’m no fan of Gore, but it’s disturbing to reflect on how different our nation’s trajectory has been because of who was president in 2001. Of all the elections in modern American politics, that might be the one of which it’s most ridiculous to have made that assertion.

Or possibly this one. I know, I know. I’ve heard the comics and pundits joking about how every election we’re told it’s a critical historic choice. But occasionally that’s actually true. While I believe the two men, Mitt Romney and Barack Obama, both have centrist tendencies in their hearts, history and their current postures have turned this contest into a pivotal election. Or, you could say, a continuation of the pivotal choice made four years ago.

Because, with the recession which took up most of his first term and the obstructionist tactics of the Republicans in Congress, President Obama has been kept from making many changes except for Obamacare, on which more in a moment. There is every reason to believe that if elected, Romney would restore many of W’s policies: continuing and deepening tax cuts for the affluent; reviving DOMA and appointing Supreme Court justices sympathetic to other social conservative positions, including repealing Roe v. Wade; and bringing back W’s neocon foreign policy thinkers who created the mess we’re still mired in. Also, because the bulk of Obamacare doesn’t roll out until 2014, if Mitt Romney is elected he will have the one opportunity to kill it before people feel its benefits.

In contrast, if Obama is reelected, as I said in my endorsement last week, “Now that we’ve just barely managed to climb out of the hole Bush dug us into, I look forward to seeing President Obama preside over the rest of the recovery, the end of the war, and the full rollout of Obamacare.” It will be trickle-down economics and neocon foreign policy that are consigned to the history books (at least for a while.)

The grain of truth in the far left’s “there’s no difference” argument is that Obamacare actually is not universal healthcare, that overturning Roe does not make abortion illegal, that both parties coddle Wall Street. On November 7, both parties will still be beholden to special interests and big money. But even so, this election will affect our nation’s trajectory, potentially for decades to come.

In the 1970s, with a Republican party badly damaged by an extremely unpopular two-term president (Richard Nixon), a highly intelligent and decent Democrat, Jimmy Carter, was able to win the presidency. But after four years of presiding over an economic train wreck and a messy international policy (with a newly radical Iran center stage) — neither of which were of his making — Carter, who was undeniably a mediocre manager and leader, was in a very weak position. The centrist Democrat’s chances were further damaged by an attack from the left of his party.

Ultimately, in a three-way race in which Ronald Reagan won just 50.7%, the trajectory of this country was changed for decades. Not only because Reagan’s positions were very different from Carter’s, but perhaps more importantly because Reagan’s argument was based largely on denouncing and ridiculing Carter’s policies and leadership. The Reagan victory by its very nature condemned the Carter presidency to go down in the history books as a failure. Clinton’s victory 12 years later was still on this trajectory. It may be hard for some to remember after eight years of W, but Clinton ran as a conservative Democrat, avoiding the liberal label like the plague, and, in office, implemented “Don’t ask, don’t tell” and wiped out the welfare system as it had existed since the Johnson Administration.

(The comparison to Reagan-Carter breaks down in that Reagan — who I voted for, BTW — was ten times the politician Romney is, and Obama is many times the leader that Carter was.)

This is why the far Right has been so willing to toss their ideology and religious biases aside, at least temporarily, in backing a problematic candidate because they (mistakenly) saw him as highly electable. They know the stakes. A Romney victory could put us back on the trajectory we were on under W, and could footnote the Obama victory of 2008 as a misguided overreaction to the war — a blip in the continuing trend towards deregulation, extreme corporate capitalism, greater economic disparity and neoconservative military policy.

So, I offer this plea to all those who are anywhere left of the far right: If you are thinking about voting for Romney because you’re disappointed in Obama — whether you think he’s gone too far or not far enough, or you’re just frustrated that the economy is still sluggish and want to try something new — understand that if Mitt Romney is elected, policy-wise, you will not get a more competent Obama or a new approach, you will get the return of W’s trajectory: more breaks for the rich, less help for the poor; more corporate influence in Washington, less protection against yet another economic disaster; more military engagement around the world, less affection for the United States among allies and foes alike; more socially conservative activism at the national level, less individual liberty at the personal level.

If that’s what you want, then by all means vote for Romney. I respect your vote and don’t doubt you think it’s the right thing for our country. But if you kind of agree with what Obama stood for four years ago and just want to express your frustration or send a message, please reconsider. Vote against the plutocracy by voting to re-elect President Obama tomorrow. The stakes really are that high. 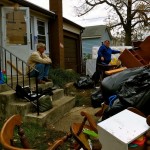 November 4, 2012
Hurricane Sandy, the role of government and the preferential option for the poor
Next Post 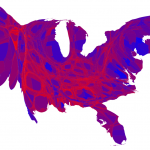 November 7, 2012 We Are All Purple: The Destructive Lie of Red States and Blue States -- UPDATED 2012 MAPS
Recent Comments
0 | Leave a Comment
Browse Our Archives
get the latest from
Progressive Christian
Sign up for our newsletter
POPULAR AT PATHEOS Progressive Christian
1

Where the miles are marked in...
slacktivist
Related posts from On the Way