Muslims as “Children for Whom Christ Died” – Interview with Nik Ripken, Part 2

Recently I posted Part One of an interview with Nik Ripken, author of a provocative book called The Insanity of God. Nik — a remarkable character who follows his faith all over the world, into some of the most dangerous places to profess Christian faith — was interviewed by my friend Erik Campano, who poses some tough questions. Below is Part Two of the interview: 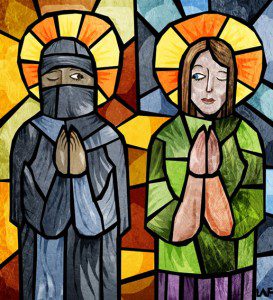 What would you do then, with a modern example of overt persecution on the part of Christians? Take Uganda, and the Lord’s Resistance Army, who are claiming to try to establish a theocratic state.

So much of what we call persecution in Africa is simply racism and tribalism. The leadership of the Lord’s Resistance Army would put you on a cross, so that they would never have to suffer themselves.

I’m not trying to pick a fight with Islam. What my wife and I have always said is that we want to give every man, woman, boy and girl the opportunity to say “yes” or “no” to Jesus. If, after hearing clearly, they say “no” to Jesus, then we honor their “no”. And there’s no force in that. You’re not going to get fed any less, or clothed any less.

Whenever a group is calling themselves the “servants of Christ”, they’ll be judged by their actions. Groups like the Lord’s Resistance Army: I don’t see anything Christian about them. Their actions are very, very evil. From living in Kenya and Tanzania — and being in Uganda — I know of no believers in east Africa who would claim the Lord’s Resistance Army as part of their family. They’d be horrified at such a concept, and they probably would want me on their behalf to say that the Lord’s Resistance Army, from the beginning, is a demonic extension of evil itself. The way that they’ve used children soldiers, the way that they’ve raped and plundered… the body of Christ in east Africa would be horrified to be linked to the Lord’s Resistance Army. I don’t even know that Muslims would see that as Christian. I would dare say that some of my Muslim friends would say, “that’s just like the fundamentalism we have in Islam.” So Islam gets hijacked in the same way that Christianity gets hijacked.

You’ve been working under a pseudonym, for obvious reasons. What’s it like to live under a concealed identity?

It’s basically online, for what we do electronically. I’ve done this since 1993.

If my real name and pen name merged, then our ability to live in Muslim countries, and love Muslims, would be in tremendous jeopardy. Tons of people could be in jeopardy. Not just workers, like myself, but local believers more so.

When does it become a contradiction, your call to be willing to die for Jesus, and living under a pseudonym?

Both names are willing to die for Jesus.

Who is your target audience? “Non-believers” or “believers”?

If our agent and publisher were sitting here…from the very beginning, they said this book is for the church in the West. This book begs us not to look at Muslims and Hindus and Buddhists as enemies, or even as targets of evangelism, but children for whom Christ died. It is a clarion call for the church to wake up and for the bride of Christ to claim the world, to serve.

There are so many believers, young men and women, couples that my wife and I are mentoring, and they don’t have a clue what to do when they get off a plane coming from the Bible Belt, or evangelical churches. What do they do in a Yemen, an Afghanistan, or a Pakistan?

So you didn’t write this with the thought, how is a Muslim reader going to react to it?

No. I’ve been shot at more for being a Westerner than for being a follower of Christ. I haven’t had a whole lot of people get very, very angry at me because I want to save their children’s lives, or feed their village, or pray for them in Jesus’ name for healing when there’s absolutely no other choice. And so the majority of people out there, when they see what Jesus does through us and folks like us, they see a Jesus that’s worth giving serious consideration to. But there’s just such an overwhelming amount of evil in this world, that we can always do battle. And like I said, we go to villages, and places, and we do absolutely everything we can to provide food, water, clothing, medicine, everything for life…and as we pull out of that village, people throw rocks at us, throw human waste at us, and even shoot at us.

But this book is not for them?

It’s not for them. It’s for the church to wake up.

Erik Campano is formerly a local news anchor of National Public Radio’s All Things Considered, and radio host and reporter at German Public Broadcasting in Bonn and Radio France Internationale in Paris.

You can find The Insanity of God at Amazon.