Where Franklin Graham Has Gone Wrong

I’m always pleased to publish a post by the esteemed Peter Wehner.

The evangelist Franklin Graham had quite a run last week.

In interviews and statements, he praised Russian president Vladimir Putin’s anti-gay policies. “I agreed with Putin. I think protecting his nation’s children, I think, was a pretty smart thing to do,” Graham told the Charlotte Observer’s Tim Funk. “I was very clear. I supported Putin in his decision to protect his nation’s children. And I think our Congress needs to do more in protecting our children.” (Mr. Graham’s oddly sympathetic article on Putin, published in Decision magazine, can be found here). 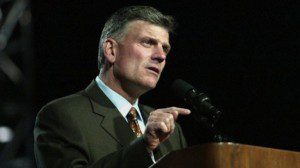 When Graham said gays and lesbians cannot have children, Funk pointed out that they could adopt. To which Graham responded, “Yeah, they can recruit.” Refusing to use the word “adopt,” he added, “You can adopt a child into a marriage but you can also recruit children into your cause.”

Like many other evangelical leaders, the Reverend Graham criticized the decision by World Vision to hire people in same-sex relationships. But unlike some others, Graham’s language was particularly shrill, saying, “It’s obvious that World Vision does not believe the Bible… I’m just heartbroken and I’m sickened that World Vision has taken this ungodly position.” (World Vision subsequently reversed its position.)

In talking about the Obama administration, Graham said they “are anti-Christ in what they say and in what they do.” (In his Decision article, Graham wrote, “Our president and his attorney general have turned their backs on God and His standards.” In the past he seemed unsure about whether Mr. Obama was born in the United States, refused to accept Mr. Obama’s claim that he’s a Christian and couldn’t rule out the president is a Muslim. Graham later apologized for questioning the faith of President Obama.)

When asked about how America can reverse its moral slide, Graham answered, “This is a good question. When you look at Scripture, when Israel turned their backs on God – and that’s what we as a nation have done and are doing – there was usually some type of calamity. There was a famine, there was a persecution from their neighbors, nations would come in and overrun them and destroy them.”

In answering a question about the “demonization” of Muslims in America, and in reaction to Funk’s statement that “Christians in this country have opposed the building of mosques and are worried about sharia laws,” Graham said, “We should be afraid of sharia law. We should be absolutely afraid of it. No question about it. Because there’s no tolerance in sharia law. It persecutes those that don’t believe in Islam. And I would say to Muslims in this country, if they want to practice sharia law, go back to where you came from, to those nations that recognize sharia law.”

I’ve been reflecting on why I, an evangelical Christian and political conservative, had a negative reaction to what was said by the Reverend Graham. For one thing, Graham, I think, wrongly views homosexuality as primes inter pares, the worst of sexual sins and very nearly the worst of all possible sins. It’s a topic that clearly preoccupies him in a way that is, in my estimation, wildly disproportionate to what one finds in the Hebrew Bible and the New Testament. (I’ve laid out my views on Christianity and homosexuality before, here and here.)

I also have differences with Graham’s theology, believing that his moral mathematics in which sin yields to God’s judgment against nations doesn’t apply to us as it did to ancient Israel, in part because America is not a covenant community on the model of what we read in the Hebrew Bible. The way God dealt with ancient Israel was sui generis. (I examine what I deem to be the logical flaws in this kind of theology here.)

And while no one could accuse me of being favorably disposed to Mr. Obama and his policies, the Reverend Graham’s attitudes toward the president strike me as excessively harsh and personal. As for sharia law, it’s hardly on the verge of taking root in America, and Graham’s “go back to where you came from” line seems to me to be unnecessary and ungracious.

But on a deeper level, I wonder if Graham’s attitudes, which I’m sure he believes are shaped by the Bible, are in fact distorted by his own cultural and political assumptions. That’s true of all of us, of course, though it might be somewhat more true – or at least more true in a certain way – of Graham than some others.

I just don’t think a fair-minded reading of the Bible would correspond to the central place (and threat) Graham gives homosexuality. The people who have to answer for the weakening of marriage in American society are overwhelmingly heterosexuals, including professing Christians, rather than gays. And when speaking about God’s judgment on America, why is homosexuality at or near the top of the list of offenses while indifference to the poor, not caring for the stranger and alien in our midst, vanity, self-righteousness, our idols and the counterfeit gods we create, a judgmental spirit and avarice are left off? Surely Graham knows that the greatest hostility that occurred was between religious leaders and Jesus, not those viewed as outcasts and sinners.

I’m not suggesting, as some liberal Christians do, that we jettison the teachings of the Bible. I am suggesting that we all make more of an effort to put things in their proper place and order; that we better balance moral beliefs with humility, winsomeness and joy, and generosity of spirit. Think of Pope Francis, who hasn’t budged at all on traditional Catholic doctrine even as he has gotten the world to take a look at his faith with fresh eyes. “Francis has combined traditional moral teachings with a scandalous belief that people are ultimately more important than rules,” according to Michael Gerson. “[Francis’s] path to reform is not changing the catechism,” John Allen Jr., associate editor at the Boston Globe, said. Instead, it is “creating a zone for the most merciful application of pastoral teaching.” Francis has washed the feet of a woman prisoner who is Muslim, which sends a rather different signal than that sent by Graham.

There is no way to prove whose approach, Graham’s or mine, is closer to the truth of things. The devil can cite Scripture for his own purposes, Shakespeare wrote, and so can Franklin Graham and I. I have little doubt that Graham is in many respects an admirable man (the organization he heads, Samaritan’s Purse, does impressive humanitarian work). We’re both trying to be faithful and see through a glass a little less darkly. But we also bring to things flawed perceptions and spiritual astigmatisms, as well as different life journeys. They have shaped how we understand our faith, and how that faith ought to manifest itself in the world. Mr. Graham would probably say I’m dramatically understating the importance of moral righteousness and in danger of advocating what Dietrich Bonhoeffer called “cheap grace.” I would argue the effects of his statements are like a carnival mirror in which what is reflected aren’t accurate images but distorted ones – in this case a Christianity of judgment, stridency and punishment more than grace and redemption.

There’s no question that because I was drawn to Christianity more because of God’s grace than His moral demands, it has colored my theological perceptions, perhaps excessively so. But I agree with the words of Gordon MacDonald: “The world can do almost anything as well as or better than the church. You need not be a Christian to build houses, feed the hungry, or heal the sick. There is only one thing the world cannot do. It cannot offer grace.”

Franklin Graham, at least based on some of his public comments, seems to have lost sight of that truth. It would help his witness to the world, I think, if he reminded himself what’s so amazing about grace. It’s what has brought him safe thus far, and what will lead him home. 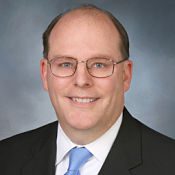 Peter Wehner is a Senior Fellow at the Ethics and Public Policy Center. He writes widely on political, cultural, religious, and national-security issues and is coauthor with Michael Gerson of City of Man and with Arthur Brooks of Wealth and Justice.

March 27, 2014
The Right Lesson to Learn from the World Vision Kerfuffle
Next Post