Earlier this week, on Monday, I was flipping through the channels and caught the end of an interview between Sean Hannity and Fr. Jonathan Morris. The interview covered issues of pedophilia and married priests related to a recent account of a conversation with Pope Francis. (Scalfari, the editor who wrote up the interview has stated publicly that he takes no notes, records nothing, and just goes from memory. In other words, when he sits down with the Pope, he plays his own personal game of Telephone….)

Back to Hannity. As he closed the interview, he asked Fr. Morris if he would start dating if the Roman Catholic Church changed its rule on celibacy.

Ouch. This question was wrong on so many levels, some of which I won’t go into here.

But the most important part is that the tradition of married priests in the various Catholic Rites has been about married men who become priests, not priests who get married. In every Catholic Church (and perhaps the Orthodox, too), a priest must be married before he’s ordained.

As a married priest, if his wife dies, he will not be able to marry again. Just like the rule for married deacons, which is why younger married men are not encouraged to pursue the permanent diaconate – it’s too early in their lives for most of them to be able to make that commitment.

And for what it’s worth, none of the Rites that allow married priests allow them to ascend to the levels of the hierarchy.

Now, if Hannity were a non-Catholic media personality, I’d chalk this up to ignorance or laziness, including his producers. But Hannity is a professed Catholic and Fr. Morris is a FoxNews regular. There’s just no excuse for this kind of sloppy reporting. If he was confused, he or one of his producers could’ve asked Fr. Morris before the segment.

Catholics, above all, should take the time to inform themselves. If not, hire a moral theologian, like myself, or another Catholic expert (or use the experts you’ve already got) to get the questions and issues right.

I’m sorry I don’t have the clip – have been looking for it and haven’t found it. If a reader has it, I’m happy to post it. 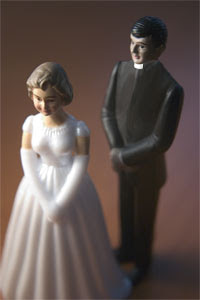