What 3 plants to grow for Justice

There is so much more to spiritually uplifting gardens than a statue of a saint or a cross strategically placed in the yard with a few petunias coloring up the base. Catholic gardeners can express their faith in nearly limitless ways in a garden setting.

This is the second in a series of blog posts focusing on a landscape theme of virtues. As I wrote in the previous column, the Catechism of the Catholic Church tells us there are four cardinal virtues: prudence, justice, fortitude, and temperance. There are also three theological virtues: faith, hope, and charity.

I will continue with the virtues theme until all have been presented. Today, the second cardinal virtue is justice.

According to the CCC:

Justice is the moral virtue that consists in the constant and firm will to give their due to God and neighbor. Justice toward God is called the “virtue of religion.” Justice toward men disposes one to respect the rights of each and to establish in human relationships the harmony that promotes equity with regard to persons and to the common good. The just man, often mentioned in the Sacred Scriptures, is distinguished by habitual right thinking and the uprightness of his conduct toward his neighbor. 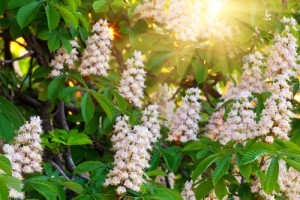 The Chestnut tree represents a personal intercession for justice, a desire for the common good for others and one’s self. The tree itself connotes “to do justice,” and the flowers are indicative of seeking it. The tree in paintings alludes to the Resurrection, to justify all mankind; trees that are grown for their wood can be cut nearly to the ground every few years—a  practice called coppicing—and results in vigorous regrowth (a resurrection if you will) of numerous long straight shoots.

Beautiful still life paintings of flowers have long been associated with the notion that both life and beauty are short lived. Lovely images of glorious bouquets, especially during the 17th century, included flowers in wilt with petals often scattered about the vase. A reminder the virtues must always be kept in mind as we progress to our final destination. 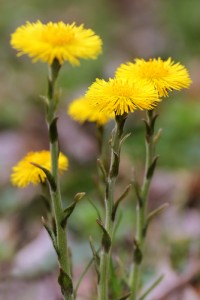 A small bouquet of yellow coltsfoot—looking much like dandelion flowers—was offered as a sentiment that “justice shall be done.” This is presumed to come from the fact that their leaves and flowers do not develop at the same time.

A small, though some consider weedy plant, is the Coltsfoot, Tussilago farfara. It is an herb that had been used medicinally for coughs; its use is now in question when its toxic effects on the liver were discovered. Coltsfoot is a perennial plant that spreads by seeds and rhizomatous roots. It is often found in colonies, patches of dozens of plants. The flowers appear in early spring with leaves, which resemble a colt’s foot not appearing usually until after the seeds set. Thus, the flowers appear on stems with no apparent leaves, and the later leaves appear then die during the season without seeming to set flowers. 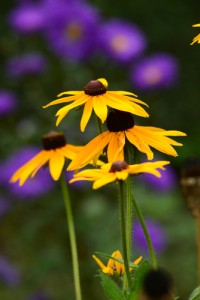 Rudbeckia, commonly known as the black-eyed susan, gloriosa daisy, or yellow ox-eye daisy connotes justice. Rudbeckiain the language of flowers stands firm in justice, its flowers once cut will last for nearly two weeks in water. The native plant also has deep roots—one of many plants known as clay-busters—and like justice grows deep and secure in life.

An easily grown perennial or biennial that flowers in late summer in to autumn, it has a wide range of cultivars for the sunny garden.

For more Catholic garden ideas, my latest book, A Catholic Gardener’s Spiritual Almanac, will offer inspiration. To learn how to build a prayer garden, my first books, A Garden of Visible Prayer, will lead you through the process one step at a time. 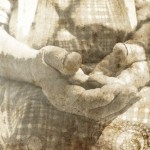 March 10, 2015
In the Sicknesses that Pierce the Heart, Pray for Sisters and Nuns
Next Post 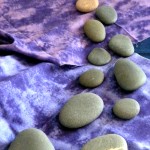 March 16, 2015 Laetare Sunday and Hard Rocks
Recent Comments
0 | Leave a Comment
Browse Our Archives
get the latest from
Morning Rose Prayer Gardens
Sign up for our newsletter
POPULAR AT PATHEOS Catholic
1

Toxic Masculinity: What It Is, and...
suspended in her jar
Related posts from Morning Rose Prayer Gardens