Mike Pence Would Be Far Worse Than Donald Trump

Would President Pence be “better” or worse than Donald Trump? That’s a fair question. A quick Google search will give you a number of people who think he would be better. And a number who think otherwise. Let’s talk about this.

Better is a relative term and, given the low bar set by Trump, it is an easy goal to achieve depending on how you define “better.” Pence would definitely bring far less drama and volatility to the office. He would not have the entourage of family members and fringe misfits that Trump has assembled. Indeed, a President Pence would surround himself with far more “mainstream” conservatives. He would have the advice and counsel of people who have made advancing a conservative agenda their life’s work. He would employ people who have studied the issues and who, through years of practice, have become skilled in promoting a meaner, more racist, more sexist, more stratified America. And this, I believe, makes him far worse for America.

Trump is like the bumbling drunk who staggers down the street bouncing off walls and parked cars in an effort to stay upright and heading in one direction. If the drunk bumps into you it is not intentional, there was no plan, it just happened. Yes, you were harmed when he knocked you over, and the stench from the drunk’s puke stained clothes now envelopes you, but that was not the drunk’s plan. No one is certain what the drunk was planning. Even the drunk is unsure. Is the drunk dangerous? Certainly! But it could be worse.

Down the same street comes President Pence. Stone cold sober and calculating every step. You are the target. He and his gang want to harm you. They want to make an example of you. They crowd you like school-yard bullies. They poke you and test your defenses. They mock you and try to provoke a reaction, a justification for what is about to happen. The attack intensifies. Any who are your allies are targeted also. Family, friends, casual associates are all vilified. You are isolated. You are a woman. You are gay. You are an atheist. You are black. You are an immigrant. You are poor. And years of planning, and practice, and indignation rain down on you crushing you and putting you in your place. This would be a Pence presidency.

Fellow Patheos writer Erin Wathen has echoed the sentiment of many and has given us “11 Reasons President Pence Would Not Be “Just As Bad.” I disagree with Erin, who makes some valid points about Pence, but also, like many, minimizes or overlooks that he has a history and a plan to fundamentally change America. An impetuous man like Trump, devoid of any moral or intellectual moorings and driven by unvarnished narcissism is undoubtedly bad for America. But the studied and deliberate crafting of policies, driven by a mixture of corporate fealty, theological dominionism, and a survival of the fittest society is far worse.

These points barely scrape the surface of Mike Pence’s dystopian vision for America:

Pence’s religious views over-ride and equality and fairness that our society has been (slowly) moving to extend to women. On top of legislation that would make women poorer he has also signed a law that requires women who have had abortions or miscarriages, no matter how early, to arrange for either burial or cremation of the remains. The law does not require a formal funeral but it does preclude any disposition other than burial or cremation. You could donate the body of a newborn for medical research but cannot for a miscarried fetus.

In Congress Pence co-sponsored a bill to redefine “rape” to “forcible rape” or what the bill’s author called “legitimate rape.” Rep. Todd Akin (R-MO) claimed that “legitimate rape” does not often lead to pregnancy because “the female body has ways to try to shut that whole thing down.” This law would allow the government to challenge a woman who was raped and wanted an abortion. They would be able to interrogate the victim and determine if the rape was “legitimate” or not because, according to their warped view of women and science “legitimate rape” does not lead to pregnancy so therefore the victim is lying.

Pence has advocated that tax money be spent on conversion therapy. When running for congress he wrote that: “Resources should be directed toward those institutions which provide assistance to those seeking to change their sexual behavior.” On the same site he wrote: “Congress should oppose any effort to put gay and lesbian relationships on an equal legal status with heterosexual marriage.”

As governor of Indiana Pence  signed a “license to discriminate” bill allowing businesses to refuse services to LGBTQ+ citizens of Indiana. In an interview on ABC’s This Week he refused eight times to say he opposes discrimination against gay people. In Congress he voted against the Employment Non-Discrimination Act which was written to prohibit discrimination against people based on sexual orientation. Pence voted against that law. He later said the law “wages war on freedom and religion in the workplace.”

“Few members of Congress have an anti-seniors voting record as consistently strong as Mike Pence.

Mike Pence was one of Congress’ biggest proponents of privatization. He supports cutting Social Security benefits by raising the retirement age, reducing the COLA, means-testing and turning Medicare into “CouponCare.” As he told CNN, ‘I’m an all of the above guy.  I think we need to look at everything that’s on the menu,’ and the record shows he has done just that by supporting every form of Social Security, Medicare and Medicaid benefit cut proposed in the past decade.

Pence would like to “convert Medicaid into a block grant program… with the likely result that countless low-income beneficiaries could lose their health insurance or see steep reductions.”

At a time when there were one million available jobs and two million job seekers in the mid-west Pence decided to kick people off of food stamps in an effort to “ennoble” them.

He signed a law capping the minimum wage in Indiana. He also repealed a law guaranteeing that “prevailing wages” be paid to workers on publicly funded construction projects. This would allow construction companies to pay far less for skilled workers than the current market rate.

Pence voted for at least 35 pieces of legislation aimed at repealing all or part of Obamacare. Some of the votes included provisions against things like “death panels” that never existed.

As chronicled here Pence has continually advocated and voted for policies that harm Americans in many areas including:

His finger on the nuclear button may be the best argument that Pence is better than Trump. As Erin Wathen  says: “The bottom line is, this would all be so much more fun to watch if there weren’t nuclear weapons involved…” And I admit I am not clear on whether I believe Trump would use nuclear weapons. I tend to doubt it but I am not certain. But I am certain that both he and Pence would be equally ready to send American troops into war. When I protested the Bush war in Iraq I said it would be a long and costly war. It has cost countless lives, trillions of dollars, decimated families, ruined cities, paralyzed nations, spawned a new generation of people with reasons to hate America, weakened us internationally, eroded our freedoms, and put us in a state of continual warfare. The next war will be worse. Much worse. And it may involve nuclear weapons regardless of who sits in the Oval Office.

Pence is today’s garden-variety conservative Republican. Motivated by an apocalyptic theology, a strident religious nationalism, a belief in the mythical “free-market,” a survival of the fittest view of humanity, and an allegiance to corporate interests. I find his calculated form of evil far more unsettling than the haphazard evil of a Donald Trump. It is for this reason and those mentioned above that I must conclude that Mike Pence is far worse for America than Donald Trump.

[Update: My concern in writing this is not to prevent the ouster of Trump. I think it is a necessary thing given his indiscretions and incompetence. My concern is that people opposed to him, especially the Democratic party, will declare victory and forget that the war has not been won. Trump is one small battle in a larger war. That war is being waged against the poor, the marginalized, women, gay people, and many others. It was being waged long before Trump became a candidate and will continue when he is gone.] 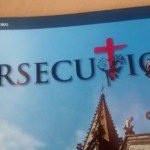