Pastor Claims Coronavirus Is Satanic Plot To Bring Socialism To The U.S.

The Devil Is A Socialist: Pastor Perry Stone, a prominent conservative Christian preacher, claims that coronavirus is a Satanic attempt to kill older Christians so socialism can take over in the U.S.

Speaking at a “Firehouse Prayer” meeting at his church in Cleveland, Tennessee, Thursday night, the conservative Christian pastor declared that “the COVID-19 virus is a demonic attempt to kill elderly Americans who won’t accept the Mark of the Beast so socialism can take over this nation” according to a report issued by Right Wing Watch.

Perry Stone says the coronavirus is a demonic attack to kill older people who won’t take the Mark of the Beast so that the younger generation can enact socialism. https://t.co/97csgDmczV pic.twitter.com/IiRqClAPKR

At the service Stone said:

The younger generations [say], ‘Oh cool, put it in my hand. It’ll open a door. Wow.’ They’re going to take it. The older people in America in the Southeast are the conservative people, and this is attacking them to get that group out.

If you get rid of all of those people who resist the Beast, and resist the Antichrist, and resist the system, then you have a whole other pro-socialist, pro-communist, give-me-your-money-and-I’ll-do-what-I-want-with-it group coming up. You see them. They’re out there, 35 percent of America is into it. And they have no respect for those older people who have made this country great.

In other words, Pastor Stone is claiming that the Coronavirus is attacking older Christians who refuse to take the Mark of the Beast in a Satanic plot to bring socialism to the U.S.

While Perry is clearly a delusional idiot who is using the coronavirus to promote his own ridiculous conspiracy theory, he is not the only religious conservative making idiotic claims.

For example, in a disastrous public health move, the Greek Orthodox Church has issued an official statement declaring that the coronavirus is not transmitted via communion.

While Christian Prophet Cindy Jacobs declares that the coronavirus “will cease worldwide” because the virus is now “illegal” in the name of Jesus.

And more recently, Televangelist Kenneth Copeland claims he can cure coronavirus if his viewers touch his oily hand through their television set during his televised ministry.

Bottom line: Prominent conservative Christian Pastor Perry Stone claims that coronavirus is a Satanic attempt to kill older Christians so socialism can take over in the U.S. 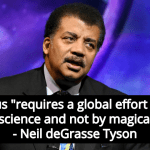 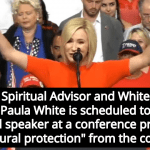