Domestic terrorists: According to their leader Stewart Rhodes, the Oath Keepers, an American far-right anti-government militia organization, will lead a “bloody civil war and revolution” if Trump leaves office and Joe Biden is sworn in as president.

Stewart Rhodes, pro-Trump leader of the anti-government extremist group Oath Keepers, posted an open letter to President Donald Trump Monday urging Trump to invoke the Insurrection Act against “domestic traitors,” order “trusted military units” to “seize all databases of the CIA, FBI, NSA, DNI, etc and the records held by all state electoral systems and administrators,” and declassify evidence of treason by “corrupt and compromised elites” who he claimed had worked with the Chinese government to subvert the election.

Through well-orchestrated mass vote fraud, the Communist Chinese and their domestic enemy allies are about to install their illegitimate puppet, Joe Biden, and his equally illegitimate puppet running mate, Kamala Harris, into the White House, with their treasonous fingers on the nuclear launch codes.

You must act NOW as a wartime President, pursuant to your oath to defend the Constitution, which is very similar to the oath all of us veterans swore.

We are already in a fight. It’s better to wage it with you as Commander-in-Chief than to have you comply with a fraudulent election, leave office, and leave the White House in the hands of illegitimate usurpers and Chinese puppets.

If you fail to act while you are still in office, we the people will have to fight a bloody civil war and revolution against these two illegitimate Communist China puppets, and their illegitimate regime, with all of the powers of the deep state behind them, with nominal command of all the might of our armed forces (though we fully expect many units or entire branches to refuse their orders and to fight against them) and with their foreign allies also joining in to assist in the suppression of American patriots.

The Oath Keepers are a heavily armed, self-described “Christian militia.” The anti-government militia has previously been involved in tense, armed standoffs with federal agencies, and  even went to Kentucky to prevent the arrest of Christian martyr Kim Davis after she defied the Supreme Court ruling on marriage equality.

Southern Poverty Law Center reports that the Christian militia is “one of the largest radical anti-government groups in the U.S. today,” noting:

The Oath Keepers, which claims tens of thousands of present and former law enforcement officials and military veterans as members, is one of the largest radical anti-government groups in the U.S. today. While it claims only to be defending the Constitution, the entire organization is based on a set of baseless conspiracy theories about the federal government working to destroy the liberties of Americans.

Make no mistake: The Oath Keepers are domestic terrorists, and should be treated as such.

Bottom line: According to their leader Stewart Rhodes, the Oath Keepers, an American far-right anti-government militia organization, will lead a “bloody civil war and revolution” if Trump leaves office and Joe Biden is sworn in as president. 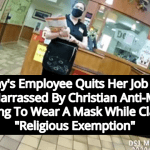 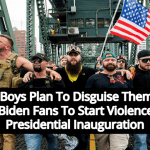