We’re speaking on the night Barack Obama is delivering his acceptance speech at the Democratic National Convention. Let me ask flat-out: Do you believe a Catholic in good faith can vote for Obama?

I can only speak in terms of my own personal views. I certainly can’t vote for somebody who’s either pro-choice or pro-abortion.

I’m not a Republican and I’m not a Democrat. I’m registered as an independent, because I don’t think the church should be identified with one party or another. As an individual and voter I have deep personal concerns about any party that supports changing the definition of marriage, supports abortion in all circumstances, wants to restrict the traditional understanding of religious freedom. Those kinds of issues cause me a great deal of uneasiness.

What about the wing of the church that says a party that supports the Ryan budget also ought to cause concern?

Jesus tells us very clearly that if we don’t help the poor, we’re going to go to hell. Period. There’s just no doubt about it. That has to be a foundational concern of Catholics and of all Christians. But Jesus didn’t say the government has to take care of them, or that we have to pay taxes to take care of them. Those are prudential judgments. Anybody who would condemn someone because of their position on taxes is making a leap that I can’t make as a Catholic. … You can’t say that somebody’s not Christian because they want to limit taxation. Again, I’m speaking only for myself, but I think that’s a legitimate position. It may not be the correct one, but it’s certainly a legitimate Catholic position; and to say that it’s somehow intrinsically evil like abortion doesn’t make any sense at all.

What does this mean for us, today?

As we enter the primaries for the hunger for power games (presidential election) of 2016, many of our friends on the religious right will be forced to wrestle with our duty to care for the poor as individuals and through our political activity.

I am not sure if what Allen reported was all Chaput said or edited, though it is difficult to extract from his statement something that would seem consistent with what the US Bishops, as a whole, would put forward in their guide, “Forming Consciences for Faithful Citizenship“, recently re-released in updated form last month.

Our difficulty with Chaput’s opinion – or at least as it was expressed – also has to do with its lack of detail and nuance, as well as its ability to distract us from the importance of poverty and other evils by presenting the matter in a way similar to voting guides using select “non-negotiables” for their framework.

Can the state, through taxation, force you to fund programs for the needy? If so, do you have to agree with their doing so?

As the election approaches, we’ll go over these and other questions on “faithful citizenship” and political activity.

Let me know what you’re interested in talking about. 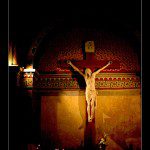