Evangelicalism is not all that it’s cracked up to be. David Gushee has recently announced that he wants to renounce his membership in the evangelical thing (whatever it is):

Everybody’s story is different. Of course millions of American Christians remain quite happily situated in Southern Baptist and/or evangelical Christianity. I wish them only the best, and am done fighting with them.

But millions of others have made their exits, or had their exits made for them, and now wander in a kind of exile. I think that my story might connect with that of many others who find themselves post-all-of-that, perhaps helping chart a way forward.

I now believe that incommensurable differences in understanding the very meaning of the Gospel of Jesus Christ, the interpretation of the Bible, and the sources and methods of moral discernment, separate many of us from our former brethren — and that it is best to name these differences clearly and without acrimony, on the way out the door.

Denny Burk agrees with Gushee that the differences between those who tolerate homosexuality and traditional evangelicals are irreconcilable:

Gushee is absolutely right about this. We have “incommensurable differences” and the differences are indeed “unbridgeable.” On the one side are the traditionalists who believe that homosexuality is a sin. On the other side are the revisionists who believe that homosexuality is not sinful. The differences between the traditionalists and the revisionists go right to the heart of what it means to be a Christian.

If the traditionalist side is correct, then there can be no fellowship between the true church and revisionists—because the revisionists have revised themselves right out of the faith. And if the revisionists were consistent with their conclusions, they would recognize that no fellowship is possible from their point of view either. The only reconciliation is for one side or the other to repent and embrace the views of the other side.

What neither Gushee nor Burk recognize is that many conservative Protestants, who agree with conservative evangelicals on sexual ethics, are not evangelical and refuse to identify as such. The reason? Evangelical theology is not fixed, evangelicalism relies on parachurch “ministries” led by celebrities, and evangelical Protestants have little appreciation for the institutional the church as the means God has ordained to redeem his people. And for Orthodox Presbyterians, evangelicals fail because they are not Calvinist:

In 1942 the National Association of Evangelicals (NAE) was founded to organize and represent the interests of conservative Protestants who were at odds with the vision of mainline Protestantism as represented by the liberal agency, the Federal Council of Churches (now the National Council of Churches). In a number of national affairs, military chaplaincy, access to radio, and documents for foreign missions, conservative Protestants had no means other than the Federal Council for addressing the federal government. In addition, the NAE sponsored a number of projects designed to promote a revival of Christianity in the United States and restore the nation to its religious and moral heritage. Though its leaders recognized that mainline churches were tainted by modernism, the NAE did not bar ministers and churches which were still members of a liberal denomination. After all, the conservatives who remained in the mainline Presbyterian Church also needed many of the services that the NAE would provide. The NAE’s first president was the nationally recognized pastor of Boston’s Park Street Church, Harold John Ockenga, a graduate of Westminster Seminary, an ally of Machen for a time in the 1930s, and consequently, well known in the OPC.

The OPC was invited but refused in 1943 to join the NAE. A major obstacle was the NAE’s inconsistent position on modernism. How could a body that was opposed to the liberalism allow its president, Ockenga, to retain his membership in a modernist denomination, the United Congregational Churches of Christ? Without opposing modernism in a consistent way, the NAE’s voice would always be compromised. Even more objectionable was the constituency of the new organization. It was composed of different Protestant theological traditions from Pentecostals to Presbyterians. Such a divergent assortment of doctrinal positions would weaken the NAE, forcing it to find a least-common-denominator theology for its activities. Finally, the OPC criticized the NAE’s plans to conduct evangelism and missions. These activities were properly a part of the visible church’s tasks and were not to be undertaken by a parachurch organization which had no system of oversight by or accountability to church officers.

At its twelfth General Assembly in 1945 the OPC forged its policies on ecumenicity. In spite of doctrinal and governmental errors in non-Reformed churches, “churches other than Reformed communions” should be recognized as “manifestations of Christ’s body.” But because of these impurities, the OPC could not unite with denominations outside the Reformed faith. (D. G. Hart and John R. Muether, Fighting the Good Fight, 116) 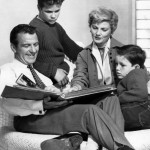 May 12, 2017
Stephen Colbert is no Johnny Carson
Next Post 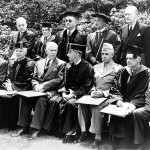 May 19, 2017 Can You Imagine An English Department Agreeing on Shakespeare?
Recent Comments
0 | Leave a Comment
"I can never keep myself from being annoyed by the disingenuousness of the "complementarian" label. ..."
NorrinRadd Are Complementarians America’s Taliban?
"All of the LGBTQ sexually are mentally ill ( have a depraved mind ). And ..."
D.M.S. Being Evangelical, Being Gay
"What did he contribute?"
Roger McKinney Is David French the Best Judge ..."
"That's because French was and is part of the "Cult of Bush.""
Johnny Davis Is David French the Best Judge ..."
Browse Our Archives
Related posts from Putting the Protest in Protestant