Civil Religion Is a Problem, but Will Biblical Religion Save U.S.?

Some evangelical (ambivalently so) historians, like David Swartz, admire politicians like Jimmy Carter and Mark Hatfield for being evangelical and avoiding being conservative (as conservatism is understood or misunderstood). Most people know Carter, the man who made born-again politics famous even before Jerry Falwell. Hatfield, though, suffers the fate of most politicians in America who do not become POTUS. In his day, the 1960s and 1970s, he was a prominent U.S. Senator from Oregon who was also a liberal within the Republican Party. Much of what constituted liberal Republicanism was either opposition to the Vietnam War or criticism of aggressive hostility to Communism.

As we gather at this prayer breakfast let us beware of the real danger of misplaced allegiance, if not outright idolatry, to the extent we fail to distinguish between the god of an American civil religion and the God who reveals Himself in the Holy Scriptures and in Jesus Christ.

If we as leaders appeal to the god of civil religion, our faith is in a small and exclusive deity, a loyal spiritual Advisor to power and prestige, a Defender of only the American nation, the object of a national folk religion devoid of moral content. But if we pray to the Biblical God of justice and righteousness, we fall under God’s judgment for calling upon His name, but failing to obey His commands.

Our Lord Jesus Christ confronts false petitioners who disobey the Word of God: “Why do you call me, ‘Lord, Lord’ and do not the things I say?” (Luke 6:46).

God tells us that acceptable worship and obedience are expressed by specific acts of love and justice: “Is not this what I require of you … to loose the fetters of injustice … to snap every yoke and set free those who have been crushed? Is it not sharing your food with the hungry, taking the homeless poor into your house, clothing the naked when you meet them, and never evading a duty to your kinfolk?” (Isa. 58:6-7).

Swartz explains the significance of these remarks and why Hatfield remains a darling of evangelicals who don’t care for the Religious Right (either before or after Trump):

Hatfield, like the broader evangelical left, remained estranged from broader evangelicalism—in both views and political methodology. Striving for political relevance rather than prophetic witness, Billy Graham did not publicly articulate his concerns about Vietnam. Though distressed over the Cambodian incursion in 1970, he had refused the many entreaties of young evangelicals to condemn the war. “What can people expect me to do?” he rhetorically asked. “March in protest? Carry a sign? If I do that, then all the doors at the White House and all the avenues to people in high office in this administration are closed to me.”

Graham, in fact, sought to preserve such access by condemning Hatfield in a phone call with Nixon on the evening of February 21, 1973, just weeks after the National Prayer Breakfast. In White House tapes, an obsequious Graham can be heard telling the President how “terrible” and “embarrassed” he was when Hatfield condemned the war. “To use a platform like that in your presence at a Presidential prayer breakfast,” said Graham, “which we leaned over backwards all these years to keep non-political, and to get up and do a thing like that was just inexcusable. And if he has any part in it next year, I don’t intend to go.” The political aspirations and reluctance of evangelicals to question authority stood in the way of a potential antiwar push.

This conservative pressure discouraged many evangelical moderates with misgivings about the war from articulating their doubts publicly. Only later would Hatfield enjoy the “heartwarming experience” of finding that within InterVarsity Christian Fellowship, an evangelical student ministry, “there were many who were conservative theologically who totally agreed with my stand.”

Hatfield certainly deserves high marks for recognizing the idolatry inherent in American civil religion and national greatness. At the same time, heeding the Bible’s call to fidelity about worship and obedience is not exactly going to present you with a society in which people who don’t practice the Bible’s religion are free, equal, and recognized for their valuable contributions. After all, the Bible says that all have sinned and fall short of the glory of God. It also says that only the true God should receive worship and honor. What is a country that follows the Bible going to do with those who do not worship the only true God?

Historians know the answer to that question.

Such knowledge may explain why Swartz is reluctant to see speeches like Hatfield’s duplicated forty-five years later:

[Hatfield’s heroic stand] raises a more fundamental question of whether the National Prayer Breakfast is a good idea at all in a religiously plural society. High numbers of evangelicals perpetuate Christian nationalism, fuse the cross and the sword, and pledge allegiance to the United States of America. Their nationalistic impulse does not leave much room for dissent, nor does it cultivate politicians who have the courage, as Hatfield did, to be prophetic. It certainly didn’t constrain Graham, who worried that “all the avenues to people in high office in this administration are closed to me.”

So the problem with a national prayer breakfast is not the dent it puts in religious freedom and toleration for a diversity of faiths. The problem is that not enough evangelicals can be prophetic as Hatfield was and threaten idolaters and blasphemers with God’s judgment.

Do evangelicals on the left really want their own brand of theonomy? If so, that’s not very liberal. (But I understand liberalism is in intensive care.) 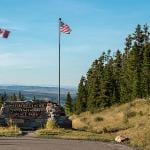 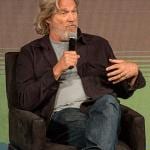 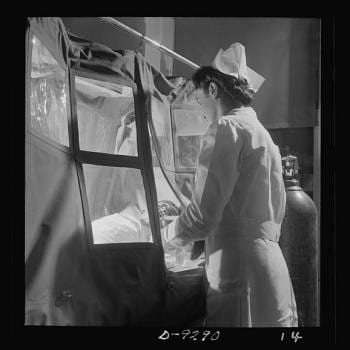 Evangelical
Can You Change Evangelicalism's Spots after Billy Graham?
Putting the Protest in Protestant
TRENDING AT PATHEOS Evangelical

Why Would a NT Scholar Resort to Writing...
The following link will take you to an article I wrote about...
view all Evangelical blogs
What Are Your Thoughts?leave a comment
Copyright 2008-2020, Patheos. All rights reserved.