David French Must Have Jonah Goldberg Scratching His Head

French and Goldberg used to write for National Review but recently moved to an outlet more anti-Trumpian, the Dispatch. In both publications, a generic conservatism provided a tent big enough for each writer. Where Goldberg can go deep into the weeds of conservative ideas and theorists, French usually relies on his training as an attorney, experience in the military, and his very basic understanding of Christianity — which is to say evangelical. When French writes about law or the workings of the Department of Defense, he overlaps with other conservative writers. But when he uses his evangelical faith to diagnose political problems, he goes off the conservative reservation, which is why Goldberg has to be scratching his head after reading some of French’s columns.

Conservatism, at its heart is comfortable with contradiction, and in utopian thinking, all contradictions are supposed to be wrenched out of society. No two good things need be in conflict with each other.

Anti-utopianism requires acknowledging that life can be unfair, that government can’t do everything, that the market will reward things we don’t like and erase things we love. Every government policy involves some trade-off between competing goods. Freedom will produce inequality not because freedom is unjust, but because freedom will yield different results since people are born with different abilities, have different desires, and make different choices.

The second follows from the first. Conservatives admit that other conservatives are fallible and even wicked (sometimes):

French has recently done just the opposite of what Goldberg wrote. First, he seems to think that involvement in public life should not involve any trade offs between moral standards and the business of governing:

In the fourth year of Donald Trump’s first term, the deal white Evangelicals have struck is now increasingly clear. Their leaders will get unprecedented Oval Office access. They’ll get a few good religious liberty regulations. They’ll get good judges. Those judges will almost certainly issue rulings that protect religious liberty. They might issue rulings that marginally protect life (though the pro-life battle is fought far more in the culture and in the states than in the courts). Those will be important and good things. They are not the only things.

White Evangelicals will have also squandered any argument that character matters in politicians. That means we’ll have more politicians of low character.

Evangelicals may support an undesirable POTUS for trade offs in legal affairs, but for French that is morally compromised.

For four long years, when the choice has been between Trump and even the most momentary break with the president for a single news cycle, the overwhelming majority of white Evangelicals—and their political leaders—have spoken loudly and clearly. It’s Trump. It’s always Trump.

This either-or logic means that French also does what Goldberg says conservatives don’t do, namely, turn your side into a team that is opposed to those on the other side. Recently, French countered the argument that the religious right began more to protect the religious freedoms of segregated private schools than to promote pro-life legislation. Along the way, French showed toleration for the good evangelical team of which he is a part even if it was partly the product of southern evangelicalism’s racist past. Of course, he could not be this generous with pro-Trump evangelicals — the competing evangelical team:

So, no, the pro-life movement wasn’t “built on a lie.” It’s not the mighty political oak born from a racist acorn. It’s ultimately the product of the combination of seismic religious and cultural changes and patient religious and political argument.

To make this claim about pro-life activism isn’t to absolve white American Evangelicalism of any racist taint…. Ultimately, the great sin of white southern Evangelicalism is that for generations its faith did not transcend and displace its culture. Instead, all too often that faith was placed in service of the very culture it should have transformed….

But the Evangelical South—which followed the pro-life lead of the Catholic Midwest and Northeast—is not pro-life because it was racist. Racism is no longer a factor in its support for religious liberty. Battles over segregation academies are largely looked upon with regret and shame. Rather it became more overtly pro-life as it (slowly and imperfectly) started to shed its racist past.

French suffers, in other words, from what Goldberg describes as the “need to be a team player—psychologically, financially, or socially.” Goldberg says this is corrupting not in a moral or legal sense but because it is “corrosive to honesty and fuel for hypocrisy.” French’s hypocrisy is evident when he fails to condemn evangelicalism’s racist past as much as he castigates Trump-voting evangelicals. His lack of honesty comes from his additional failure to admit that he has different standards for different groups of evangelicals. 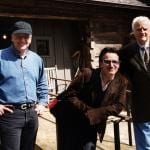 May 21, 2020
I Just Wish Evangelicals Were Consistent
Next Post