I Just Wish Evangelicals Were Consistent

Finney preached even more explicitly against the mores of business. “The whole course of business in the world is governed and regulated by the maxims of supreme and unmixed selfishness,” Finney said. “The maxims of business generally current among business men, and the habits and usages of business men, are all based upon supreme selfishness.” Finney indicted capitalism itself, arguing that the “whole system recognizes only the love of self” and “the rules by which business is done in the world, are directly opposite to the gospel of Jesus Christ, and the spirit he exhibited.” The man of business, by contrast, lives by the maxim: “Look out for number one.”

Next, they rejected society:

The ensuing, postwar decades provided little encouragement. Industrialization and urbanization began to reshape American society. The arrival of non-Protestant immigrants, most of whom did not share evangelical scruples about temperance, came to be seen more as a threat than an opportunity. Teeming, squalid tenements, roiling with labor unrest, hardly resembled the precincts of Zion that evangelicals had so confidently predicted earlier in the century.

Evangelicals began, in greater and greater numbers, to appropriate the ideas of John Nelson Darby, a member of the Brethren (later known as Plymouth Brethren) in Britain. In his writings and during his visits to the United States, Darby informed American evangelicals that they had been interpreting the Bible incorrectly. Jesus would not return to earth after the millennium; he would return before the millennium, which meant that Christians could anticipate the second coming at any moment, at which time they would be “raptured” into heaven and those “left behind” would face divine judgment.

The consequence of Darby’s premillennialism (Jesus would return before the millennium) was to absolve evangelicals of responsibility for addressing social ills. If Jesus was going to return at any moment, why bother with making this world a better place? … premillennialism shifted evangelical attentions from the collective ills of society to the salvation of individuals.

Then, they rejected politics:

during the middle decades of the 20th century, evangelicals were largely apolitical; they did not participate in politics, certainly not in any organized way. Yes, there were a few evangelicals who made their voices heard – Fighting Bob Shuler, Billy James Hargis, Carl McIntire – but they were outliers. Many evangelicals during this time, drawing on their premillennial beliefs and their convictions about the corruptions of American society, refused to register to vote. Politics was the realm of Satan, they reasoned, and besides, this transitory world was condemned and careening toward judgment. Why bother?

Now, though, we hear they wanted to inaugurate the kingdom of God — mind you — here on planet earth:

Animated by their desire to bring about the kingdom of God on earth, they sought to alleviate suffering and work toward equality — crudely and imperfectly at times, to be sure, but determinedly. Theirs was not an abstract faith. Antebellum evangelicals understood that, in Finney’s words, “God loves both piety and humanity.”

Evangelicals are so irresponsible not to control their message. 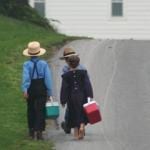 May 28, 2020 David French Must Have Jonah Goldberg Scratching His Head
Recent Comments
0 | Leave a Comment
Browse Our Archives
Follow Us!