Maybe Rusty Reno Had A Point

Back at the beginning of the various state and federal directives to stay at home in response to COVID-19, Reno, the editor at First Things, worried that public officials had lost sight of considerations other than disease and health:

At the press conference on Friday announcing the New York shutdown, Governor Andrew Cuomo said, “I want to be able to say to the people of New York—I did everything we could do. And if everything we do saves just one life, I’ll be happy.”

This statement reflects a disastrous sentimentalism. Everything for the sake of physical life? What about justice, beauty, and honor? There are many things more precious than life. And yet we have been whipped into such a frenzy in New York that most family members will forgo visiting sick parents. Clergy won’t visit the sick or console those who mourn. The Eucharist itself is now subordinated to the false god of “saving lives.”

Reno took a lot of heat for that. But now after almost two weeks of protests and social distancing norms pretty much a secondary concern — even though they were supposed to protect the lives of all Americans — Reno’s notion that some ideals are more important than preserving human life doesn’t look so nuts. At the Atlantic, Alexis C. Madrigal and Robinson Meyer more or less echo Reno’s point from almost 10 weeks ago:

For several weeks at the beginning of the outbreak in the U.S., the need to control the virus took precedence over other concerns. Now, for many people, the pandemic is no longer the most pressing national issue. As protesters and some public-health officials have said they are weighing the harms of police violence against the risk of increased viral spread and choosing to gather in the streets, state governments have made similar risk-reward arguments about balancing public-health and economic concerns. The virus does not care about these trade-offs. Retail reopenings and racial-justice protests may exist on different moral planes, but to the virus they both present new environments for spreading.

Even one of Reno’s biggest critics, Alan Jacobs, who tried to trace the intellectual genealogy of the First Thing’s editor’s conservative Roman Catholic reaction to post-modern philosophy, and faulted Reno for implying that in 1918 Philadelphia was right not to shut down the city during the flu pandemic and St. Louis “lived under Satan’s rule” for imposing bans on public gatherings — even Jacobs has had to readjust. To account for the different reactions among protesters to the virus and police brutality, Jacobs has to appeal to something other than historical facts the way he thought Reno should have. Jacobs observed, for instance, that COVID-19 has led to the deaths of more African-Americans than police brutality:

It’s not clear how many black people have died from COVID–19, but a reasonable estimate would be 25,000. That means that the coronavirus has killed 95 times more black Americans in just a few months than police killed in all of 2019. Put that way, the plagues scarcely seem comparable, do they?

Jacobs explains the different reactions among African-Americans to the plague of virus and the plague of policing by distinguishing chronic from acute affliction. COVID-19 is “acute” because it came suddenly and will likely go away. Police brutality is “chronic” because it goes on and on. In which case, psychology explains different reactions to social behavior not “plain old, unavoidable old, biology.”

Reno may well wonder why he can’t have his own theory, Roman Catholic or post-modern, about the way Americans respond to disease and death.

June 5, 2020
Only the Amish are Amish, (practically) Everyone Else is Modern
Next Post 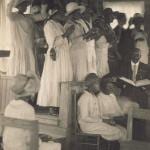 Why Aren't the Other Slavers Getting...
Cranach
Related posts from Putting the Protest in Protestant

Evangelical
How Evangelicals Can Vote for Joe Biden this...
Putting the Protest in Protestant
TRENDING AT PATHEOS Evangelical

What is “Purity” Actually About?
What is the relationship between purity and the concepts of honor and...
view all Evangelical blogs
What Are Your Thoughts?leave a comment
Copyright 2008-2020, Patheos. All rights reserved.