According to the Congressional Budget Office, doctors in the United States perform at least 30 late-term abortions each day.

“Based on data compiled by the Centers for Disease Control and Prevention (CDC), CBO estimates that, each year, about 11,000 abortions take place 20 weeks or more after fertilization.”

Any honest person who has dealt with this issue can tell you that this number is bound to be on the low side. Many doctors do not report late-term abortions. One reason for this is that pro choice people fight any attempt to require reporting with wildly erroneous claims that reporting would put undue hardship on doctors and endanger “women’s health,” as well as “turn back the clock” and “send women to the back alleys again.” They usually manage to work rape and incest victims into this somewhere as well.

This is standard boiler plate stuff that they trot out during any and every discussion of pro life legislation. The incredible thing is that, no matter how many times they do it, or how completely inapplicable it may be to the legislation in question, their true believers always buy it.

So, reporting of late-term abortions is, like every other sort of needed regulation, sparse, inconsistent and compromised by expensive court cases and constant hysterics from the pro abortion lobby.

Despite this, the CDC was able to document that American doctors kill at least 11,000 babies every year whose mothers are in the 5th month or later in their pregnancies. I’ve written before about the simple fact that late-term abortion is never medically necessary. A late-term abortion inevitably puts the woman through a labor and delivery anyway. So, if there is a medical reason to stop the pregnancy to save the mother’s life, doctors should just deliver the baby and try to save both their patients.

Doctors who do late-term abortions have to very carefully kill the baby by shooting poison into its heart before before they do the procedure. If they don’t, there’s a good chance that the baby will survive the abortion and become a problem. I’m no doctor, but that sure sounds like they are aborting babies that are at least potentially viable by any definition of the word except the hatched-up political science fiction of pro abortion Supreme Court decisions.

All the arguments about the woman having a right to her own body fall apart when we consider late-term abortion. If the baby can survive the birth, then the child’s body becomes the issue, not its mother’s.

We commit at least 11,000 of these killings every year in this country. I am against the death penalty. I have the votes and the scars to prove it. But think for a minute about the outcry if we were doing 11,000 executions each year. There would — and there should — be widespread condemnation and claims of barbarism.

The Congressional Budget Office included this paragraph in their report:

“HR 1790 would result in increased spending for Medicaid. Since a portion of Medicaid is paid for by state governments, CBO estimates that state spending on the program would increase by about $170 million over the 2014-2023 period.”

I’m not going to go off on this because I realize that it’s the job of the CBO to provide this kind of cost analysis on all pieces of legislation. They are not saying, as some people will claim, that the CBO feels this money is more important than the lives of babies. They are simply supplying the information.

I will say that $170 million is not very much money over a 9-year span in Medicaid funding. At 11,000 babies killed every year of that time period, we would have 99,000 dead children. That’s almost twice the number of soldiers we lost in Viet Nam. What the report is actually telling us is that the cost is minuscule, while the number of lives lost is huge.

One thing we need to decide as a people is do we want to continue this practice of killing viable babies? I would think that even people who favor legal abortion should be ready to re-consider late-term abortions by now.

It amazes me how angry and indignant people become when they see a photo of a baby murdered in an abortion. You’d think the photos, and not the killing itself, was the problem. I think the reason for all this outrage at the sight of photos is simple: They tell a truth that people don’t want to know.

It would be better by far if we stopped those photos by stopping the killing that they record. Think how simple that would be: No more late-term abortions = No more disturbing photos of murdered late-term babies. 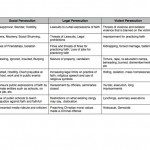 July 8, 2013
Even Water Moccasins are Cute When They're Babies
Next Post

July 10, 2013 The Hydra-Headed DOMA Decision and Bankrupting the States
Recent Comments
35 Comments | Leave a Comment
Browse Our Archives
Follow Us!

12 Catholics I Admire
You can tell a lot about people by the company they keep...
view all Catholic blogs
What Are Your Thoughts?leave a comment