The United States Senate is quietly passing a law, known by the acronym ENDA, (Employment Non-Discrimination Act) that will place homosexuals in the same protected class as African Americans.

Personally, I am in favor of civil rights for gay people. They have the right to live their lives as they chose and to love whomever they want. They definitely should not be subjected to unjust discrimination. Homosexuals are human beings and American citizens.

However, I want the laws we pass to be just for everyone. Laws that seek to create a super category of citizen whose rights trump those of other citizens are, on their face, unjust laws. I am particularly concerned about issues of religious freedom.

I am also concerned about the way that Congress approaches legislation these days. I would wager that there are two incentives behind this particular bill. One is to pass a “hero deal” for the gay rights community. The motive for his is to pull gay activists and their dollars even closer to the Democratic Party. The other is to force the Republican House to either pass the bill and thus enrage a large part of their own base, or to kill and it and thus motivate the Democratic base.

One thing I’m reasonably sure is not under serious consideration is the impact ENDA would have on the lives and freedoms of ordinary Americans. I doubt if the question as to whether or not this is a good piece of legislation has been seriously discussed in the halls of Congress by either side of the debate.

According to a letter that the United States Conference of Bishops sent to members of the United States Senate, this proposed law would threaten religious liberty, support the redefinition of marriage, and reject the biological definition of gender. Those are serious charges, which should open the legislation for debate and amendment.

In the current climate, it is a stand-up action for the bishops to speak against this legislation. They, the Church, and faithful Catholics along with them, will be excoriated and called bigots and worse for having the temerity to suggest that the language of this legislation is flawed and too one-sided.

Have we reached the point where people of good will are unable to discuss legislation on its merits because of the mindless rhetoric and name-calling that is used to promote it?

I have the impression that Congress has moved past being a deliberative body and entered the arena of bully politics and don’t-read-the-bill-it-will-only-make-it-harder-to-vote-for-it.

I’ve done some of this myself, so I know a little bit about the emotions that push it. When a powerful special interest group wants something, every law-maker knows that the political price of opposing it will be terrible. If the special interest — in this case, gay rights advocates — wants something, and they are known for being a group that can turn on a dime and attack with intent to destroy in a personal way anyone who opposes them, the stakes grow higher.

Hence, the motivation to not read the bill. It’s easier to vote for a bad bill if you don’t read it or think about it or let yourself listen to requests to revise it.

It is truly a shame that Congress no longer deliberates about the legislation it passes, but just lines up the votes according to political consideration and then rams things through to see if they will hurt the opposing party in the next election.

Here is a copy of the letter issued by the USCCB concerning this law. 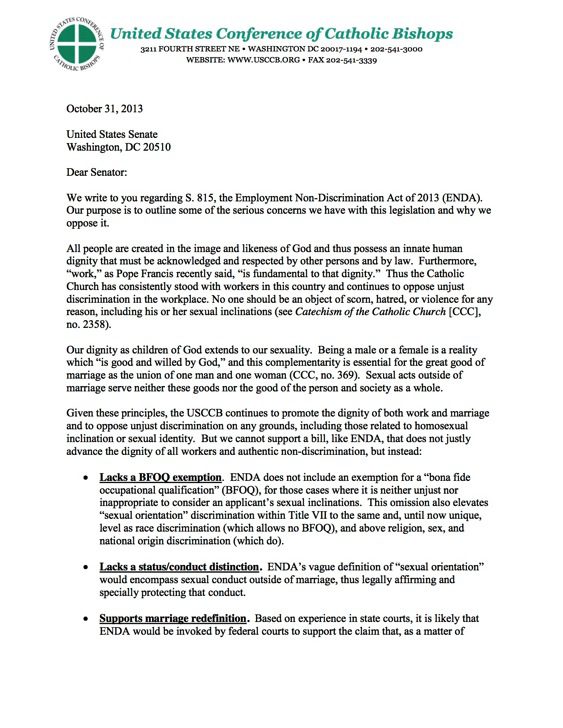 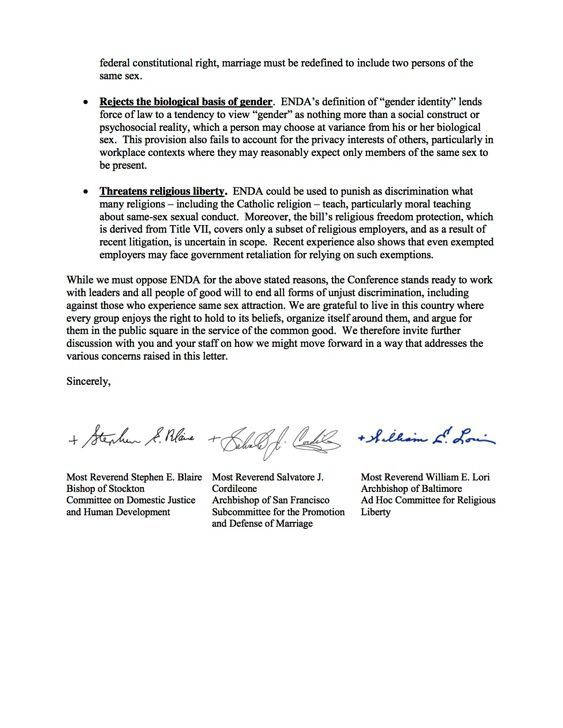 November 6, 2013 Vatican Bans Medjugorje Apparitions in US Churches
Recent Comments
18 Comments | Leave a Comment
Browse Our Archives
get the latest updates from
Public Catholic
and the Patheos
Catholic
Channel
POPULAR AT PATHEOS Catholic
1

For What We Were Made
We were made for love, not use.  This first reality of our...
view all Catholic blogs
What Are Your Thoughts?leave a comment

18 responses to “ENDA and Bully Politics”