If you live west of the Mississippi, and have clear skies, you will have the opportunity to see a rare treat.

Tonight we will have a total eclipse of the moon, sometimes called a “blood moon.” The term blood moon comes from a historical reference to a total eclipse during the time of Alexander the Great. A total eclipse occurred just before Alexander was about to go into battle, and documents referred to the “blood red moon.”

I’ve seen other total eclipses of the moon that were silver colored. Whatever the color, they are incredible to watch.

The eclipse will begin around 12:53 EDT and complete about 6 am EDT.

Those are prime sleeping hours for most of us. Even though I really want to stay up and watch, I’m going to have to give it a pass. I still have enough endurance in me to pull an all-nighter and then work the next day. I’ve done it just recently because of being up all night with my mother. But if I don’t have to, I don’t want to.

If you have the option and the view, get out your camera and take a few shots for me. It should be great.

For most U.S. states east of the Mississippi River, tonight’s total lunar eclipse will likely turn out to be a total bust, while in contrast, much of the central and western United States will likely get a fine view of the “blood moon” in all its brilliance.

The first total lunar eclipse of 2014 occurs in the overnight hours tonight and will be visible across most of North America, South America, Hawaii and parts of Alaska. Depending on your location, it begins either late tonight or in the wee hours of Tuesday, but as with every skywatching event, you can only see it if Mother Nature cooperates.

April 15, 2014 Holy Week: Pope Francis' Reflections for Way of the Cross
Recent Comments
3 Comments | Leave a Comment
Browse Our Archives
get the latest from
Public Catholic
Sign up for our newsletter
POPULAR AT PATHEOS Catholic
1 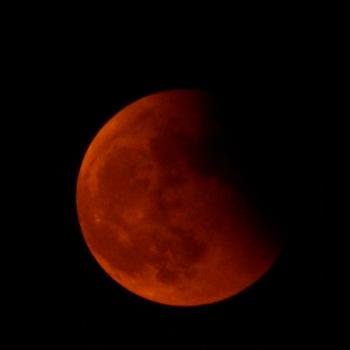 Catholic
Get Your Camera Ready for the Super, Bloody,...
Public Catholic

Catholic
If you feel like howling at the moon,...
Public Catholic