Its members are anyone who dares to oppose gay marriage, or gay behavior of any sort. The punishment, even for icons of the tech industry, is to have their careers deep-sixed; all in the name of “inclusiveness” and “tolerance.”

We have reached the point that these very fine words, inclusiveness and tolerance, have become the tools of a new totalitarianism that strikes at freedom of expression, freedom of political action and freedom of religion for every American.

This blacklist is the opposite of freedom. It is absolute intolerance. It is the apogee of exclusiveness.

It is bigoted, biased, hate-filled, discriminatory and totalitarian.

It is the ghost of Jim Crow, the shade of McCarthy, walking alive again among us today.

It has no place in a free society.

I’ve written numerous blog posts decrying it, including this one yesterday. Elizabeth Scalia wrote a post yesterday, calling on the gay community to speak out in support of freedom. Hopefully, at least a few people in that community will have the courage to break ranks and do so.

I deleted Mozilla Firefox from my computer.

I am going to get a lot more active in working for the First Amendment rights of Christians, but I need to pray and think before I decide exactly how. I will do this after session adjourns this year. It will almost certainly mean that I take a few days off from blogging.

I made a small donation to the National Organization for Marriage. It’s the first of a recurring donation.

I urge you to consider how you can take a stand against the blacklisting of people for their religious beliefs and completely legal, private and peaceful political activities. At the very least, take Firefox off your computers and donate a few dollars to the National Organization for Marriage. Even a $10 donation helps, especially if you give it every month. 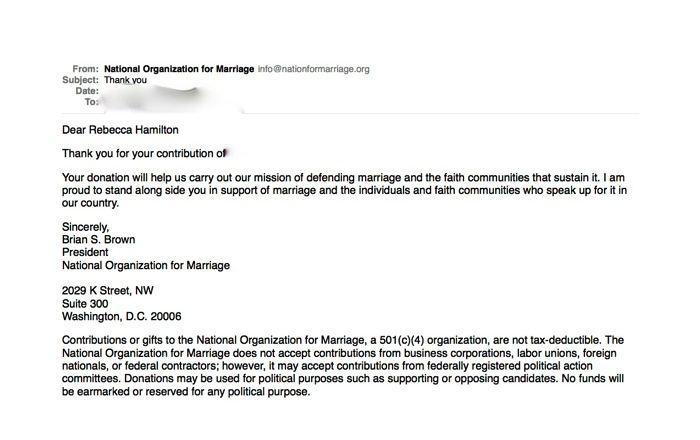 Gnosticism Is Like a Religion,,, Part I
Introduction in Defense of Everything Else Because people keep running their mouths...
view all Catholic blogs
What Are Your Thoughts?leave a comment

74 responses to “Resisting the New Blacklist”