Pope Francis is Writing an Encyclical on the Environment, and Both Sides of the Political Spectrum are Sharpening their Knives 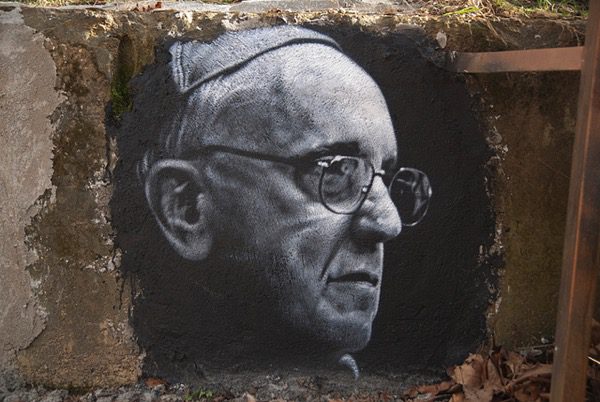 It would be a hopeful sign, that so many of our culture warriors and mega money-men are seemingly besotted with the pope to the point of losing all common sense.

They are not besotted with the Pope as the Vicar of Christ. They are interested in him and his every little word because he has power, and power is what they are all about.

Pope Francis does not have the power to push a button and melt down mountains. He cannot sign an agreement and send the industrial base of a great capitalist nation to a communist nation. He can’t raid a national treasury and put the coin in his own pocket. He can not write a statue or issue an order and with his terrible swift pen KO the family, human life at its beginning or the tenuous hold on respect held by our frail elderly and disabled.

Pope Francis can not do any of those things. What he can do is speak directly to the conscience of billions of Christians by telling them the plain facts of what Christ meant. He has the power to take the phrase “the least of these” and tell us who the least of these is and what we must do for them. He can remind us that Jesus said it more than once and He said it without equivocation that if we ignore “the least of these” we will not see heaven.

Pope Francis can define for us what, specifically, following Christ means in our world today. He can elucidate for us what the Scriptures mean when they tell us that we are our brothers’ keeper and that we have dominion over the earth.

We live in a time when corporatists are raping the American economy for their gain, while they also rape the planet on which we all live. At the same time, nihilists are selling us a cant of destruction of the family, the devaluation of human life and bloated social programs that not only do not heal the wounds our indifference to human beings have inflicted but are increasingly becoming a means to attack the rights and freedoms Americans enjoy.

Does anybody besides me see that these two things are not opposites? They are different verses of the same song, and that same song is the satan-inspired ballad of the pit, the cultural refutation of the value, dignity, worth and meaning of human life. The fact that one side does it for corporate interests and the other side does it for nihilistic interests makes no real difference. Dead is dead and we are killing ourselves in the service of these false gods of our politics.

Patheos writers from every quarter comment about this, each in their own way.

Frank Schaeffer recently published a passionate article in the Huffington Post in which he repented of and disavowed his religious right past. I think he got his politics a bit wrong when he said, … the American right is not about politics as most people understand politics but about religious absolutes.

Now, I know well that there are many sincere Christians who are part of the right side (let’s call them Republicans and stop the cuteness) of the political spectrum, precisely because they were chased out of the left side (Democrats) as punishment for their belief in God, in particular for their belief in His demand that we honor the sanctity of human life.

I’ve lived this nonsense, up close and personal, for quite some time. I can’t tell you how many times my fellow Democrats have uninvited me to be a member of their party because I am pro life.

I understand the flight of so many Christians to the Republican party. I also know that a good number of Republican office holders are devout and sincere Christians.

But, religious absolutes are not what the puppet masters who beam candidates into office on a beam of corporate money — in short the puppet masters who own and run the Republican Party for their own interests — are about. In fact, at least here in Oklahoma, a good many of the top tier Rs that I’ve known have been atheists, big donors to Planned Parenthood, etc.

Buying a legislature or a Congress by putting them in office with a few million dollars is a cheap investment for controlling the American government and bending it to your own greedy and ruthless will.

On the other side, the side where Mr Schaeffer has found his new hallelujah, the vote-getting machine is aimed at the don’t-wanna-folllow-no-rules crowd. The Democratic Party, which was once the party of working people and the great builder of economic diversity and hope for this country, has become the purveyor of nihilism and the destruction of human life.

If it’s a bad moral idea, you can be pretty sure that the Ds will latch onto it and claim it as a human right before too long. Abortion, embryonic stem cell research, gay marriage, egg harvesting and the intellectual tyranny of political correctness are their vote getting machine.

Again, I know many people who still cling to the working-class roots of the Democratic Party. They truly are about a living wage and building an economy with American manufacturing, American labor and American know-how. I know a good number of elected Democratic officials, including, not so long ago, myself, who feel this way.

They/we are to the Democratic Party what the pro traditional marriage people have become to the Republican Party; someone to be tolerated and used, but also, when policy is made, ignored.

The American people are a bit like Mr Schaeffer in that they flip from one of these extremes to the other, in search of someone who will listen to them. Every few years they toss out whoever is in office and elect a new batch of wing nuts from the opposite political spectrum. Then, after the people they elect ignore the people who elected them and follow the the corporatist pipers who paid for their campaigns, we the people wearily, and with a deepening sense of hopelessness, toss them out and try again.

How does anyone keep putting their faith in princes in the face of this? More to the point, how does anyone keep chasing after what Elizabeth Scalia calls “Strange Gods”, in this case the false idol of political salvation, year after year, election after election?

What does all this have to do with Pope Francis and his as-yet unwritten encyclical on the environment? In truth, it doesn’t have much at all to do with the encyclical itself, and that is the primary cause of all the carrying on about it in the two wing-nut camps that seek to define Western society in their own image.

They are not dealing with the actual encyclical, and they never will. What they are doing now is rehearsing and readying. They are softening us up for the tsunami of propaganda that will be unleashed when the encyclical is published.

Right wing nuts are afraid that Pope Francis might write something that says that they (gasp, shock, rage) might be in need of conversion. Left wing nuts are hopeful that this is so. Both of them intend to ignore the actual encyclical and write their own version of it when it comes out.

What they both want out of the deal is political advantage in order to solidify their control of the American government to be used for their own destructive and America-destroying purposes.

Pope Francis has the power of speaking as the Vicar of Christ and these politicos and their mouthpieces want to harness that power to their own anti-Christ uses. That makes him the object of their hatred and delight, another person thingy to massage and lie about until they drain him of his relevance and can’t use him anymore.

Mark Shea wrote a post yesterday in which he noodled with what this might mean to Catholics like us who are living our walk with Christ in these times. He rightly notes that certain members of the clergy are infected with this disease of defining Jesus by their politics along with the rest of the populace. They veer to the left, or to the right, whittling Jesus down into a caricature of the R or the D, and teaching their hapless parishioners to do the same.

Mark is the writer Catholic righties love to hate. He’s fought the good fight of speaking against both both torture and abortion, of being against corporatism and socialism, of saying that the right to life goes seamlessly from conception to natural death and that hunger, poverty, corporate wars and nihilistic debauchery that kills are co-promotors of the culture of death.

That is a most Catholic position, and it is also the one position most likely to make everybody, everywhere in the political firmament mad at you.

Because the little g gods of political fealty require a serious jettisoning of Christian baggage as the price for that comfortable feeling of finding cheap grace and easy salvation in your voter registration card. It does not matter which party you chose. If you follow its teachings instead of Jesus, you are on the broad path that leads to destruction.

What I call The Political Heresy, which is the practice of looking for God in your politics, is, in my opinion, the primary heresy of contemporary America.

I would put it above nonsensical claptrap such as claiming that killing people with abortion and euthanasia is a human right, or that harvesting women’s bodies for eggs is women’s rights. I would also put it above the other claptrap of claiming that Jesus was a corporatist, and that what He really meant all along was blessed are the rich.

I do that because The Political Heresy is a first cause of both these things. What makes it a first cause is that it shifts our loyalty and our followership away from Christ Jesus and places it on the propagandized musings of well-paid think tanks and media outlets who are designed and employed to confuse, delude, misinform and otherwise lead us away from Him.

They care about getting and keeping power.

And everything else they say is a lie.

January 6, 2015
The epiphany of the Epiphany: The Wise Men r Us
Next Post

I love it when Catholics Nerd...
Catholic and Enjoying It!
Related posts from Public Catholic

Suicide and Heaven...Is there Hope for Victims?
Suicide impacts everyone. There is a suicide in the United States every...
view all Catholic blogs
What Are Your Thoughts?leave a comment

9 responses to “Pope Francis is Writing an Encyclical on the Environment, and Both Sides of the Political Spectrum are Sharpening their Knives”