This Just In: Catholic Church Will Forgive Your Abortion

This Just In: Catholic Church Will Forgive Your Abortion May 13, 2015 Rebecca Hamilton

Christian bashers are characterized by a number of things.

First, they are bigots.

Second, they are full of hate.

Third, they very seldom get their facts straight.

Consider the headline to a story in the New York Post. Catholic Church Will Now Forgive Your Abortion it proclaims.

The New York Post has evidently learned that the Catholic Church forgives sins, and they are all agog over the discovery. They appear to think that forgiveness of mortal sins is a new fangled invention by Pope Francis. They see this as part of Pope Francis’ efforts to make the Church “relevant” to modern times.

Get an education Mr or Ms headline writer. Your bias is showing.

I once went to confession — and this was a couple of pope ago, I might add — for my sins related to abortion. I had a long list, and I must tell you, abortion-related sins were outnumbered. I had pretty much done in the Ten Commandments in my young life.

You know what happened? The priest told me that these were serious sins, but that I had confessed them with humility. Then he absolved me. I walked out of that confessional feeling as if the detritus of a thousand years had been lifted off me.

The media waxes eloquent about the ways that Pope Francis is supposedly “changing” the Church to make it more relevant. They should check their sources. Pope Francis has not and will not change one word of the consistent 2,000 year moral teachings of the Catholic Church.

That’s because Pope Francis is Peter, not Christ. Peter was a follower and Pope Francis is a follower. The Holy Father is the head follower of a billion other followers scattered around this planet. He — and we — follow a Risen Lord Who is the Way that leads to eternal life. Pope Francis follows Christ, and he is leading us in following Christ. He points the way to the Way, the Truth and Life.

The Catholic Church has always been the foremost agency that provides for the poor, educates the ignorant and heals the sick in any community in which it finds itself. These days in which we live have seen an outright attack on human life and human dignity in the guise of abortion, embryonic stem cell research, euthanasia, surrogacy, egg harvesting, sex trafficking, gay marriage and other moral innovations that ultimately lead to the disfigurement of the human.

Of course, the Catholic Church will stand against these things. To do otherwise would be to deny the Gospels, the prophets, and ultimately, to deny Christ Himself.

As for relevance, the media needs to think a bit more deeply. The Catholic Church is a highway to heaven. All any of us has to do is to believe and love Jesus and follow the Catholic Church and we can be assured that we are doing the right thing and are on the way to eternal life.

Is there something more “relevant” than that?

The Catholic Church is the highway to eternal life. It is the purveyor of the full witness of the Gospels, the whole Gospels, which include justice, mercy and hope for the darkest hours of our existence.

The media’s off the cuff and inaccurate analyses offer us nothing except Christian baiting bits of inaccurate and ignorant nonsense.

Christian baiters cherry pick facts and distort reality to justify their hatred of Christianity. Without severe editing of reality, their Christian bashing tropes fall over under the weight of their own lies.

There are lots of people who make their livings attacking Christianity. Hatred of Christians and Christianity is all they do.

Day after day, they write and publish blog posts that yammer at bias and bigotry against Christians and Christianity. They must spend their days combing the internet for anything they can use to attack Christians. They waste their talents on writing the filth of hatred, bigotry and discrimination.

They are to be pitied, not attacked. They have gone after the stone of death and abandoned the bread of life. It is up to us Christians to lead them to a better way, to redeem both them and this sick culture, by converting it and them, one person at a time.

The Catholic Church is the way to find the Way that leads to eternal life. I thank God for leading me to it.

Pope Francis will send an army of globe-trotting priests — his “missionaries of mercy” — to absolve women who’ve had abortions, in the latest Vatican bid to catch up with modern times.

The effort, which includes reaching out to doctors and nurses who’ve performed abortions, will commence in the Holy Year of Mercy, which Francis has declared will be celebrated between Dec. 8, 2015, and Nov. 20, 2016.

Archbishop Rino Fisichella, the head of the Pontifical Council for Promoting the New Evangelization, announced the bold initiative and said the church should always be in the absolution business.

“The missionaries of mercy are priests sent out by the Holy Father . . . as a tangible sign of how a priest should be a man of pardon, close to everyone,” Fisichella said.

Vatican officials walked a tightrope on Thursday, celebrating forgiveness but standing firm that abortion is still very much against church teachings.

“There are a number of clergy with the ability to pardon abortions already, it is not that rare,” said the Rev. Federico Lombardi, a Vatican spokesman.

Church hard-liners warned that stepped-up efforts to forgive those involved in abortions could “cause confusion” among Catholics.

May 13, 2015
History of the Crusades: President Obama's Prayer Breakfast Comments
Next Post 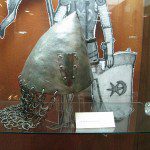 May 14, 2015 History of the Crusades: Debunking False Crusade History
Recent Comments
10 Comments | Leave a Comment
Browse Our Archives
get the latest from
Public Catholic
Sign up for our newsletter
POPULAR AT PATHEOS Catholic
1

Yes, It's About the White Supremacy
suspended in her jar
Related posts from Public Catholic

FASH 102: Good Country Volk
Earlier sections in this course1: FASH 101 We've touched on some typical...
view all Catholic blogs
What Are Your Thoughts?leave a comment

10 responses to “This Just In: Catholic Church Will Forgive Your Abortion”