Justice Alito said that the prisoners who petitioned the Court “failed to identify a known and available method of execution that entails a risk of lesser pain, of all Eighth Amendment execution claims.”

“By saying that there are no alternatives available, that doesn’t magically make whatever you were doing acceptable,” ACLU executive director, Ryan Kiesel said in response to the ruling.

OKLAHOMA CITY – Executions in Oklahoma are already being rescheduled after the Supreme Court upheld the decision to use a controversial drug for lethal injections.

The Oklahoma Attorney General’s Office is on one side of the debate, while the Oklahoma ACLU is on another, but it’s the offenders on death row who will ultimately see the results of this decision.

The first execution could be as early as August 5.

Richard Glossip, one of the men who said the drug is cruel and unusual, will now face his ultimate fate.

“It’s like you’re in a tomb,” Glossip said during a rare death row interview with News Channel 4. “Just waiting to die so they can finish it off.”

He, along with three other inmates, argued midazolam would violate the Eighth Amendment ban on cruel and unusual punishment. It went before the Supreme Court.

July 2, 2015
Anonymous Site Asks for $1Million in Donations to Stop Woman from Having an Abortion
Next Post 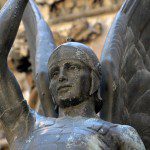 July 2, 2015 ... and Cast Into Hell Satan and all the Demons
Recent Comments
3 Comments | Leave a Comment
Browse Our Archives
Follow Us!